The designer's first scent will launch exclusively at Saks in the U.S. 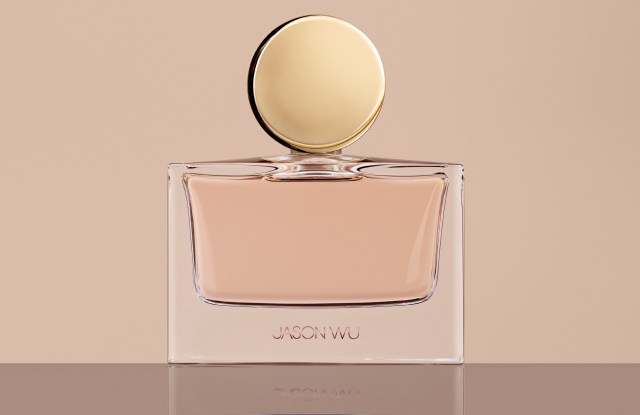 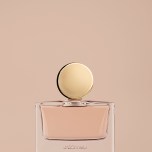 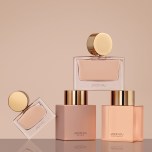 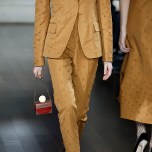 If Jason Wu’s first fragrance looks familiar, it’s probably because the bottle bears a striking resemblance to the “Fragrance Box Clutch” that walked the runway of his fall 2017 show.

This is just one example of how the eau de parfum, which hits counters in August, ties in to Wu’s decade-old ready-to-wear line in nearly every way, from the juice to the packaging, the designer said in an interview Monday morning. A co-creation with architect Andre Mellone, Wu’s namesake scent comes in a bottle with a thick glass base that’s topped with the same perfectly circular gold cap that composes the handle of his new handbags.

“Every aspect of this fragrance represents the brand,” Wu said, noting that the “nudey pink” hue of the juice, inspired by the color of pressed powder compacts from the Fifties, is oft referenced in his clothes. The slipdress he custom designed for Lily Aldridge to wear to the CFDA Awards on June 5 was the same color as the bottle. Also, he added, doing a fragrance in the floral family was a no-brainer because every one of his collections contains a floral print of some kind. In the fragrance’s case, the main ingredient here is jasminum sambac, with peonies and lily of the valley playing “supporting roles.”

Wu has dabbled in beauty in a collaborative capacity several times before — there was an eye shadow with Shiseido in Asia in 2011; a candle with Nest founder Laura Slatkin in 2012; collections with Lancôme since 2013-15, and a limited-edition Caudalie Beauty Elixir that hit Caudalie last summer. But the Jason Wu eau de parfum marks the designer’s first solo venture in the space, via a partnership with fragrance distributor Parlux Fragrances Inc. and perfumer Frank Voelkl of Firmenich.

“The first thing he [Voelkl] did was show me something like 200 raw ingredients that I had to smell. I smelled everything and this one scent that took me back was jasmine sambac,” Wu said of the rare breed of jasmine that’s only found in India. “It was the one thing that took me back; it transported me. I remember when I was little, I lived in Taiwan and our neighbor had a whole wall of jasmine and I used to go pick it. I didn’t even remember this, it was so subconscious…[but] it transported me to the point where it was a powerful memory.”

Wu admitted that fragrance is the beauty category he’s wanted to tackle since the inception of his rtw, but it wasn’t until he established himself as a serious fashion player — and joined forces with Parlux — that he was able bring a scent to market.

“I found the right partner…and the 10-year mark is a good time for it. Any earlier it might have been premature. For the vast part of the last 10 years, I was trying to get to know myself first. It takes that long…the 30s are good,” the 34-year-old Wu said, adding that while the focus for now is on fragrance, he plans to expand into other beauty categories in a few years.

In the U.S., the fragrance will be sold exclusively in all Saks Fifth Avenue doors for three months starting Aug. 17, and for the same period in 20 Hudson Bay stores throughout Canada starting Aug. 23. A 3 oz. eau de parfum will retail for $145, a body cream for $80 and a foaming shower oil for $65.

“For a niche brand, it’s [approachably priced at] $145. It’s a little untraditional for the launch of a designer fragrance….Generally, on the market, [designer fragrances] are under $100,” Wu said.

For Parlux, this is what makes the collaboration with Wu so attractive. It’s a foot into the niche fragrance fold, a sector the 30-year-old company is itching to enter, according to Don Loftus, president of Parlux Fragrances Inc.

Jason Wu is a clear departure from Parlux’s current portfolio, which is largely comprised of celebrity blockbusters from Rihanna and Paris Hilton — who has little presence in the U.S. but maintains a sizable business in Asian and South Americas markets — to better priced sportswear brands like Vince Camuto and Kenneth Cole. Wu’s fragrance is comparable in price to the Norell brand that Parlux revived, but Loftus maintained that the two have a completely different customer.

“We’re an unusual company because we really service the upper moderate department store group with lines like Vince Camuto and Kenneth Cole. They are very important to the big department store groups like Macy’s, Dillard’s and Belk. We meet a really important need there across America for that upper moderate to better [scent] — but not specialty store. We know there’s a huge opportunity in specialty; there’s a lot of action,” Loftus said, noting that as a result, fragrance from the above is typically priced at about $85 as opposed to Wu’s $145.

There’s also international potential for Wu, which makes building the designer’s fragrance portfolio even more attractive to the manufacturer, Loftus added. He’s found that even if a designer is “huge in America,” if their collection is only sold domestically or they’re American, it makes “it hard to sell in France or most of Western Europe.”

“They [Europeans] like European brands. That’s something we’ll always be looking for. Jason [Wu] has that built in — because of his nationality and because his ready-to-wear is sold in many of these countries,” Loftus said. An international rollout will include select doors in Australia in October, the Middle East in the fall and Mexico, Southeast Asia and the U.K. next spring.