Four years after the launch of the Jeanne Lanvin women’s fragrance comes a Couture version, meant to lure a slightly more mature consumer. 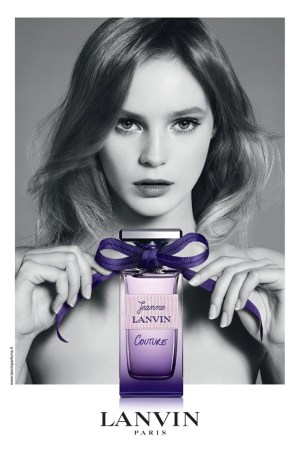 Both fragrances have a fruity aspect, sharing a raspberry note. However, Jeanne Lanvin has more red fruit and musky characteristics than Couture’s floral woody juice, which was created by International Flavors & Fragrances perfumer Domitille Bertier. Other notes in Couture include rose, violet leaves, cedarwood, musks, plus a peony accord and a magnolia essence from the Laboratoires Monique Rémy.

The bottle shape for the new scent remains the same as the original’s, and both iterations boast the Lanvin fashion house’s signature grosgrain ribbon as a label. But Couture’s flaçon has a violet hue and doesn’t include a pink tulle ribbon. Rather, it has a purple bow tied around its neck.

The fragrances’ advertising campaigns differ, too. Whereas the Jeanne Lanvin ad has an “Alice in Wonderland” feel, the new fragrance’s is “more feminine,” said Pommier. “There is more sensuality.” The single-page Couture print visual was shot by Sofia Sanchez and Maurio Mongiello and features a close-up portrait of model Juju Ivanyuk.

Pommier explained that although it’s difficult to describe precisely the demographic the two scents attract, she reckons Jeanne Lanvin’s core consumers are between 15 and 30 years of age and that Couture’s will be upward of approximately 25.

The new scent is to be introduced starting in May in Northern Europe. Its launch in most other countries will take place from that month through July, save for some parts of Asia, where the rollout could happen as late as September. The U.S. is not slated at present to get the fragrance.

While Inter Parfums executives would not discuss sales projections, industry sources estimate the Couture scent will generate 8 million euros, or $10.6 million, in wholesale revenues during its first year.

Jeanne Lanvin is the Lanvin brand’s third bestseller worldwide after Éclat d’Arpège and Marry Me. However, that ranking can change on a country- or geographic zone-basis.

“Jeanne is an important pillar in the portfolio,” confirmed Pommier.

In the first quarter of 2012, the Lanvin brand’s fragrance sales increased 12.1 percent on-year to 15.7 million euros, or $20.6 million at average exchange for the three-month period.