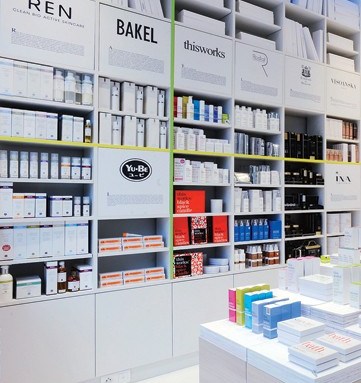 Paris’ Left Bank has become a destination for those on the lookout for left-field fragrances and cosmetics. Aépure, a concept store selling only independent brands, opened in the sixth arrondissement’s gallery district in mid-April. In keeping with the neighborhood’s bookish bent, the 1,200-square-foot store has a magazine theme throughout, from the stacks of paper serving as podiums to the articlelike explanations of each brand. The store stocks 52 labels from countries as far afield as Iceland, New Zealand, Japan, Thailand and Sweden. The selection is edited by 15-year industry veteran François de Grossouvre. “They are brands with a soul,” he says, adding each was chosen to complement the others. Aépure is divided into rooms that de Grossouvre likens to a magazine’s columns. There’s “Cocon” (or Cocoon), containing 32 brands for the face, hair and body, such as Evidens de Beauté, Yu Be, Christophe Robin and Sacha Juan. Nine fragrance lines, including By Kilian, Juliette Has a Gun and Nasomatto, populate the “Séduction” area, while the “Homme” room carries nine brands, including Skin Tech, Sharps and Au Bonheur des Hommes. Seven Aépure stores are slated to open in Paris within three years, while locations abroad are expected in 2010. —Jennifer Weil

Kaloo Parfums is launching an ecofriendly scent for tots. Called Kaloo Naturel, the juice, which is 98 percent natural, contains notes of pink grapefruit, white lotus, peach, vanilla and musk. The packaging is earth friendly, too, with an organic cotton plush bear cap. “There was a demand from moms for a natural product,” says Kaloo Parfums’ Frédéric Beaulieu. The brand is an offshoot of French toy and clothing company Kaloo. —Liz Webber

When Beth Nonte Russell accompanied a friend to China in 1999 she had no idea she would return with a daughter. This unexpected adoption later found its way into the pages of Forever Lily, her book about the experience, followed last month by the introduction of a scent of the same name. “I wanted to express the joy that was the outcome of this whole experience,” says Nonte Russell. Blended by perfumer Sarah Horowitz-Thran, the fragrance contains notes that represent various olfactive elements of her trip and the emotions that resulted: lychee’s sharpness for sadness within the orphanage walls, woody base notes for incense used in a Forbidden City temple and the fragrant lily as a symbol of her baby’s sweet disposition. “Scent was such a huge part of the experience,” says Nonte Russell, whose book is being developed into a screenplay. “There was a lot that was hard to convey in writing, and scent gave me another medium.” —Belisa Silva

Breathing clean air is becoming such a luxury that Natura Bissé is offering it as a special perk to select customers. The high-end skin care fi rm is giving deluxe facials inside a big plastic bubble pumped with air free of dust, allergens and other unpleasant particles. The dome of purifi ed air was developed by a Spanish laboratory to assuage respiratory ills. Natura Bissé figures the clean air is also “an important factor for antiaging treatments,” says a spokesman. The facial has its own bubblicious twist—an effervescent exfoliation, which percolates on the skin and stimulates blood circulation. The service, which was launched at an Oscars swag suite in February, is being provided free by invitation at Neiman Marcus stores in Honolulu, Short Hills, N.J., and Dallas throughout the summer. —Holly Haber

Four cutting-edge hair stylists are offering at-home versions of their storied services. “It’s a recession, yes, but life goes on,” says celebrity colorist Sharon Dorram, who has tended to the tresses of Sarah Jessica Parker and Renée Zellweger, among others. She recently launched At Home Color Kits designed to extend the time between salon visits by five to six weeks. The primary perk? The kits’ $100 price tag is far less than the $225 (and up) you’d pay at the Sally Hershberger Salon for an appointment with Dorram. “It is user-friendly color for women who can’t get in my chair or can’t afford to be a regular,” says Dorram. Along the same lines, last month celebrity stylists and co-founders of RSession Tools, Kevin Ryan and Frank Rizzieri, introduced the Pin-Up Girl Kit, $21.99, a portable stock of clips, bands and pins with instructions on how to create of-the-moment styles. “The kit gives the consumer the looks we do on the runway and salon in a compact, edited down version,” says Rizzieri, whose catwalk work has included Victoria’s Secret and Diane von Furstenberg. Meanwhile, in a new DVD how-to series, New York hairstylist Antonio Prieto reveals the secrets behind the simple, chic styles he’s known for among clients like Cate Blanchett and Linda Evangelista. “We can create value for our clients by teaching them how to do their hair in between appointments,” says Prieto, of the $45 tutorials. “If you have no time or money, these are little tips that will really add value. —Belisa Silva

Teatime etiquette just became a trifl e more elaborate—and odiferous—in one of London’s chicest stores. Harvey Nichols in Knightsbridge recently started offering Vanille Gourmande Afternoon Tea, with a menu created to compliment Laura Mercier’s Vanille Gourmande fragrance. As well as finger sandwiches, scones served with homemade kumquat and vanilla marmalade and clotted cream, and vanilla and lemon infused cupcakes, diners can sip a specially blended tea comprising notes of jasmine, vanilla, rose and green Chinese tea. (The scent itself includes notes of vanilla orchid, vanilla liqueur, heliotrope, bourbon vanilla, sandalwood and amber.) “My wife wears the Vanille Gourmand perfume, which gave me the idea,” says Jonas Karlsson, the head chef at Harvey Nichols’ Fifth Floor Restaurant. “As well as being a very sensual fragrance, vanilla is an essential cooking ingredient.” Prices for tea start at about $33, rising to $98 when served with a 50-ml. bottle of the scent itself. —Brid Costello