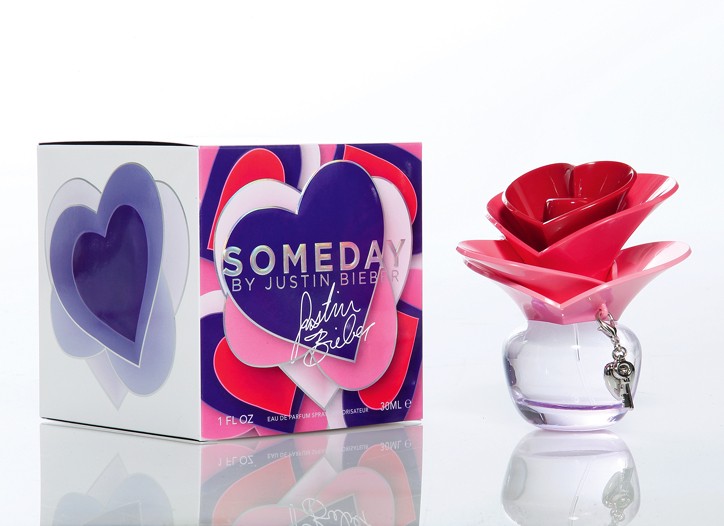 The Biebs looks out for his girls.

Normally, a 17-year-old male pop sensation might be expected to speak to his own gender first and debut with a men’s scent, perhaps a showbiz equivalent of Axe. But not Justin Bieber.

Bieber’s first prestige market fragrance is not only a women’s scent, but the bottle is designed with femininity to the max — from the heart-shaped flower of a top to the removable charms hanging from the neck. The name, Someday, even suggests that a young fan can only dream. To top it off, the scent — created by Honorine Blanc of Firmenich — is billed as a “fruity gourmand” formula, meant to appeal to the 14- to 18-year-old core of Bieber’s fan base, according to Noreen Dodge, executive vice president of marketing at Give Back Brands, the producer and licensee.

The product choice seems obvious to Bieber, who responded to questions via e-mail from Japan, where he is performing. “Let’s be real, the way a girl smells is very important to a guy! I have such a deep connection with my fans, so creating a fragrance that I personally love is another way I can bring them closer to my world,” he said.

And if there are any lingering questions about the Biebs’ level of sensitivity, there’s the fact that the proceeds are earmarked for charity. Branding expert Robert Hollander and cosmetics industry veteran Paul West say they set up Give Back as a platform for entertainers to raise money for good causes. Hollander, who is president, predicted that this fragrance will raise “millions” for a list of charities that is now being put together. These include two of Bieber’s favorites: Pencils of Promise, which builds schools, and the Make-A-Wish Foundation.

“Not only am I able to create a fragrance for all my fans,” Bieber continued, “but I am able to give back to charity, which is a huge priority for me. The people at Give Back Brands really get me, and what I represent and care about.”

The singer, whose album “My World 2.0” ranks number one in 17 countries, seemed to enjoy the collaboration. “They really let me take the lead on the entire project, because I know my fans better than anyone — from working with the team on the development of the fragrance itself to helping to design the bottle and packaging,” he wrote. The bottle, with its top fashioned like layers of hearts superimposed on one another, was designed by Lance McGregor. He also designed the outer carton with its deep embossing.

Dodge said the fragrance is being shipped in June to prestige stores, including Macy’s, Sephora, Dillard’s, Belk, Nordstrom, Boscov’s and Ulta. Dodge estimated the distribution at 2,500 doors. In the Canadian superstar’s home country, the brand will be carried by Shoppers Drug Mart. Hollander said a foreign rollout is now being planned. Dree Hemingway appears in a print ad shot by Terry Richardson. A TV commercial, directed by Robert Lee, was filmed in a gravity-free cabin of a Boeing 737 NASA training jet. It is scheduled for broadcast from Black Friday after Thanksgiving through Christmas.

Among retailers, expectations are running high. Asked for comment, Muriel Gonzalez, Macy’s executive vice president and general merchandise manager of cosmetics, fragrances and shoes, replied: “Justin Bieber is an international star with a built-in fan base from the social media sphere. He speaks to a young, socially conscious and digitally connected consumer, and we are excited to offer his new fragrance. But with proceeds benefiting various designated charities, Justin is sending a terrific message that you can be socially responsible at any age. We are confident that his global appeal with teens, tweens, twentysomethings and their moms will translate to traffic both in-store and online.”

Jessica Hanson, director of fragrances at Sephora, said, “We felt it was important to launch the collection for a variety of reasons, including it is on trend with our younger fragrance client, there is a strong socially driven charity component and, of course, a very popular celebrity. As well, the juice is a fruity floral, which is always a popular fragrance family with our client. We’ve never had a male celebrity sell a women’s fragrance: however, Justin certainly speaks to our younger fragrance clients.”

As befitting a celebrity with one billion YouTube viewings and 27 million Facebook friends, the executives are aiming for the top of the fragrance charts. While no projections were given, a landing in the top five would generate at least $30 million at retail in the U.S.