The designer's first women’s scent with Coty is due out on Oct. 11 exclusively in Sephora’s European doors. 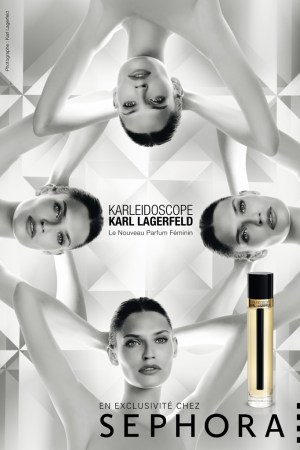 PARIS — Karl Lagerfeld himself inspired the new Karleidoscope women’s fragrance, which is due out on Oct. 11 exclusively in Sephora’s European doors.

This story first appeared in the October 7, 2011 issue of WWD. Subscribe Today.

“It is Karl’s multifaceted vision that was the main inspiration for this project,” said Françoise Mariez, senior vice president of marketing for European fragrances at Coty Prestige, a division of Coty Inc., which holds the Lagerfeld fragrance license.

The designer was involved in every step of the scent’s creation.

“He had the idea of the kaleidoscope, the bottle and the advertising,” said Mariez.

That’s true for the fragrance’s name, as well.

About the juice, which was concocted with Givaudan’s Christophe Raynaud, Lagerfeld explained, “A fragrance is not made to be explained by words. A mix of scents creates something we can smell but not describe. I can tell you that the base is patchouli fraction orpur, benzoin Laos orpur, tonka bean and musk, and the heart (a perfume must have a heart that should break, in a way, our heart) is heliotrope (one of my favorite scents), violet and freesia. But I don’t want to be too technical about the fragrance. I prefer a sentimental approach.”

As its name suggests, the scent’s outer packaging resembles a kaleidoscope through whose Perspex, faceted lens top a Lagerfeld silhouette can be seen multiple times. The outer tube also contains a small black sponge shaped in the designer’s profile, which can be spritzed with the fragrance.

“It is a very simple idea but worked out in a refined, detailed way,” said Lagerfeld, of the bottle design.

Model Bianca Balti stars in Karleidoscope’s advertising campaign, which was photographed by Lagerfeld. “I love Bianca and her strong, modern but classical beauty,” he said. “The ad is a kaleidoscope of images of her face four times on the page.”

Coty acquired the Lagerfeld scent license in May 2005, when it purchased Unilever’s global prestige fragrance business that also included the Calvin Klein, Vera Wang, Cerruti and Chloé brands for $800 million. The first Lagerfeld-Coty project was a line of three scents for men and women, called Kapsule, which was launched in fall 2008. Other former Lagerfeld fragrances include Karl Lagerfeld Classic, Jakko, Lagerfeld Photo and Sun Moon Stars.

Karleidoscope is the first women’s scent Lagerfeld has created with Coty. “We have decided to focus on this segment, as all of his creations mainly address women,” said Mariez.

She explained Karleidoscope’s target audience is women aged 30 and older, who are “urban, arty and creative.”

While Coty executives would not discuss sales projections, industry sources estimate Karliedoscope will generate 10 million euros, or $13.3 million, in wholesale revenues during its first 12 months.