Charlotte Tilbury will launch a fragrance, Scent of a Dream, and she's tapped Kate Moss as the face of it. 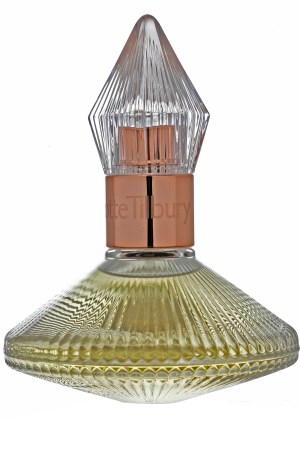 Charlotte Tilbury, who is as passionate about fragrance as she is makeup, is taking the signature scent she concocted at age 13 and making it available to the masses.

The Ibiza-born Tilbury, who has an arsenal of celebrity friends and clientele including Victoria Beckham, Salma Hayek and Penélope Cruz, will add a signature fragrance, Scent of a Dream, to her range. And she’s tapped best friend Kate Moss as the face of it. Moss is featured in a print campaign, photographed by Sølve Sundsbø, as well as a film, shot by Baillie Walsh, that will appear online and in select national cinemas, starting next month.

Scent of a Dream will hit counters exactly three years after Tilbury launched her namesake cosmetics and skin-care line. Although a makeup artist by trade, Tilbury said this scent has been 30 years in the making. She’s been wearing the same “secret scent” she mixed at age 13 from raw materials procured from “hippie markets” in Ibiza.

“If you think about scent, you can’t control it. [You can use it to] alter your state of mind and others around you; it’s the most powerful thing you can do…Pheromones do exist. It’s that mind and body [connection] and why we’re attracted to each other,” Tilbury told WWD during a preview of Scent of a Dream, which she called “the key to attraction.” She transformed a Greenwich Village townhouse into a fragrance wonderland, where dreamy lavender, violet and jasmine florals were woven with ivy and ferns and draped from the walls and ceilings. The scent’s starburst motif was conveyed through a life-size, floor-to-ceiling installation of ribbons and rose gold keys.

The launch is an ambitious one, with the fragrance hitting charlottetilbury.com on Aug. 15, arriving at Nordstrom and nordstrom.com on Sept. 1 and Bergdorf Goodman, Net-a-porter and additional retailers on Sept. 19. By the end of the year, Tilbury’s cosmetics range will be carried in more than 70 doors globally, and fragrance in more than 100 doors globally. She declined to give projections, but a source in the industry said Tilbury’s company could do $50 million in sales this year. The fragrance comes in three sizes — 30, 50 and 100 ml. — and retails for $75, $100 and $130, respectively.

Tilbury explained that she spent the past three decades studying how her scent affects people — from haunting ex-lovers to nostalgic times spent with close friends — and learned quickly that she could elicit emotions and make them feel joy. One can time travel with scent, she said, making it possible to go back and smell the same emotions you smelled 10 years ago — or more.

While she is mum on how she makes her secret scent, she promised Scent of a Dream contains all of the notes from her original (“Nothing was left out,” she said). The fragrance, a floral chypre, contains top, or “Joy Notes,” of lemon, peach, black pepper, saffron, mandarin and bergamot; middle, or “Fleurotic” notes of tuberose, jasmine, franckincense, violet, patchouli and base, or “Pscyho Active” notes of fire tree, Iso E Super, hedione and ambroxan. The scent was created in partnership with fourth-generation nose Francois Robert, president of the Technical Commission of the French Society of Perfumers.

“I created a scent that would ignite this key to attraction in a more sophisticated way than I had done. I built something that was a spark — for love, light, positivity and sex on the wearer and the people around you,” she said.

Next month will also be the first addition to the signature 10 looks Tilbury introduced when her makeup collection first hit Selfridges on Oxford Street in London in fall 2013. A year later, she launched the line in the U.S. at Bergdorf Goodman and Nordstrom. Bloomingdale’s will pick up the line in four of its stores starting in September.

Tilbury is successfully building a cosmetics brand predicated on complete looks versus individual products. According to Tilbury, half of the women in the U.K. and 40 percent of women in the U.S. don’t engage with makeup because they don’t know what to choose or use. This became the impetus for her entire company.

“They don’t want to look stupid or look like a clown or know what color suits their eyes,” she said. Her goal is to “decodify makeup and give it to all women. How can I put it together and make the most beautiful formulas in the world and make it easy to use?”

From the inception of her brand, Tilbury wanted to simplify makeup by creating ten makeup “looks.” Each one, from Dolce Vita to Ingénue, contains every product for face, eyes, lips and cheeks that one needs to complete the look. She creates videos to accompany each one, including Dreamy, which launches simultaneously to Scent of a Dream.

Customers can buy the products à la carte — eyeshadow palettes retail for $52, Full Fat Lashes mascara for $29, The Classic eyeliner pencils for $22, Lip Cheat lip liners for $22, Kissing lipsticks for $32, Lip Lustre lip lacquer for $22, Cheek to Chic blush for $40 – or buy the entire kit in a lip printed makeup bag for $230.

Tilbury said the age of her customer ranges from 18 to 80, and in describing her existing looks, she made sure to compare them to inspirational women of decades past and today. For instance, she likens the Ingenue to Mia Farrow and Kate Bosworth; Rock Chic to Brigitte Bardot and Kate Moss, and Dolce Vita to Sophia Loren and Penelope Cruz.

“You need these 10 classic black dresses of makeup that never really change. According to the environment, women change their hair and makeup look. If you’re in Ibiza you’ll wear Golden Goddess, and if you’re wearing Calvin Klein you’ll wear Uptown Girl,” Tilbury said of her “fool-proof” stable of 11 looks. “This system empowers women to become the most beautiful version of themselves through this easy to choose, easy-to-use format.”

She called it a virtual consultation without her needing to be there.

Of her latest, Dreamy, Tilbury mused that “it is so your birthday makeup, literally every boy loves it every woman loves it. It’s very natural and mesmerizing; it’s you but the most enhanced version of you.”

She described a soft, gold eyeshadow palette as “ambient light, all over your eyes.” For the lips, the look also calls for Secret Salma, the shade of her Hot Lips lipstick inspired by Salma Hayek that’s designed to give the wearer a “gorgeous Latina pout.” The set also comes with a lipstick-shaped USB stick with a “secret video” tutorial.

Hot Lips came about after Tilbury spent years mixing custom lip colors for celebrity friends. She started off mixing concealers and various lip colors for Moss, but then started doing the same for Sienna Miller, Cruz and Beckham. The public started to “fall in love” with these colors — “a glowy, natural pigmented lip,” per Tilbury — and she decided to add 12 shades of Hot Lips to her award-winning Matte Revolution collection, all named after a different celebrity.

Tilbury’s new Dreamy look will me merchandised alongside Scent of a Dream in many doors where her full cosmetics line is not yet sold.

Nordstrom, which launched her collection two years ago at its Los Angeles store in The Grove and on nordstrom.com, will roll out the complete cosmetics range to 29 of its doors by Sept. 1. Sixty-three doors will carry Scent of a Dream, and the 34 non-beauty doors will feature Charlotte Tilbury branded towers adjacent to the fragrance that sell the Dreamy Look, as well bestsellers like Tilbury’s Magic Cream moisturizer.

Gemma Lionello, executive vice president and general merchandising manager, cosmetics at Nordstrom, called Tilbury’s one of the most successful beauty launches the retailer has ever had. She said Nordstrom is “expediting the growth” of the collection.

“She has a vision first, and within her vision is how she wants the woman to look and feel. This gives the woman the look that Charlotte envisions and the scent gives you the complete feeling,” Lionello said. “She’s a working artist; she has a true connection with her customer. She lives and breathes makeup.”