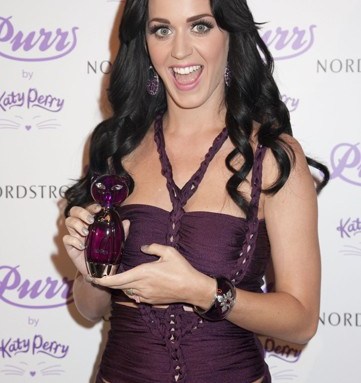 Katy Perry is putting her claws into the highly competitive international fragrance market with Purr, her debut scent.

On Tuesday afternoon in New York, as reported, the singer tooled around town in a personalized milk truck selling scents to consumers at Greeley Square and racking up about $30,000 in just two-and-a-half hours, according to industry estimates. Perry sold 450 bottles of the 3.4-oz. size of her scent, which is priced at $65 (a 1.7-oz. version goes for $45). This came after a successful Selfridges event at Oxford Street in London last Friday, where Perry reportedly sold 700 bottles on presell and another 500 the day of her store appearance. She also unveiled the scent to U.K. beauty journalists at London’s Circus club Friday morning.

At a private party at the Bowery Hotel in New York Tuesday night, Perry was clad in an aubergine Jean Paul Gaultier dress and sparkly red Louboutins — confessing “They’re all rentals, and I’m not afraid to admit it!” She explained the thinking behind the milk truck strategy, which was publicized via Perry’s Twitter feed.

“Because it’s a kitty-cat theme,” she told WWD. “I’m such a sucker for a theme — you see that in my music, my music videos and now with my first beauty venture. I’m doing things a bit differently. We didn’t launch in a store, we launched in the middle of New York City with a Purr parade, which was perfect for me. And I think when you see this [cat-shaped] bottle on the shelves, you’re kind of, like, taken aback. I hope that it has the same kind of unique feeling as when I first saw the snow globe that Jean Paul Gaultier did [for Fragile], or the corset fragrance bottle he did [for Le Male]. They really influenced me, because it wasn’t just another bottle of perfume with some ridiculously serious name. I don’t need that in my life — I’m a young girl and I like to have fun. I like to be cute. I hope even when the perfume runs out, people want to keep it as a little tchotchke.”

As to what it was like hand-selling her fragrance on the streets of Manhattan, Perry took it in stride. “I sell in the street every day, from when I first walk out my hotel room,” she said. “I am working it! That’s nothing new. I think people love it when there’s new and exciting fun things — in New York City, that’s a staple. There’s always something going on, and it was nice to make a splash. I don’t do a lot of things that are typical.”

Neither is Perry overly concerned with the endless art-versus-commerce debate that pains some of her peers. “I don’t feel like I’m selling a product — I feel like I’m selling more of my personality. And my personality is really in this bottle, and with everything I do, I’m the boss, you know? Nobody says to me, ‘Hey Katy, it’s time to launch a perfume because you’re a pop star.’ I do it because it’s fun and it’s a creative extension of my groove, and because I want to.”

To anyone who suggests she’s selling out? “I want to sell out! That’s the thing. I’m a businesswoman, and selling out sounds good to me.”

In the U.S., Purr is exclusive to Nordstrom and nordstrom.com until February. In the U.K., Selfridges is carrying the fragrance exclusively at its four stores and on its e-commerce site, before the scent rolls out nationally Saturday.

Perry’s scent licensee is Gigantic Parfums. The fragrance is an eau de parfum concocted by Firmenich with citrus, jasmine and musk notes.

Isaac Lekach, chief executive officer of Gigantic Parfums, said global distribution will expand next year, including more specialty and department stores in the U.S. and additional countries in Europe. Perry said that, while she wants to be a “tiny bit selective and create a buzz for right now,” she’s eager to add Japan to the distribution list. “I love the Japanese; they are my everything,” said Perry. “They influence me to the death.”

Perry noted that Nordstrom and Selfridges were chosen because “I don’t want to do something that puts it out of people’s price range [but] I want it to have an air and class around it.”

What about her next fragrance? “I don’t know! You’re thinking ahead,” she said, laughing. “There’s going to be an evolution of Purr, and certain things that will be available in time. But for right now, I don’t want to get too cart-before-the-horse.”

While questions about Perry’s recent marriage to British comedian Russell Brand were officially verboten, in London, she still gamely fielded inquiries about what her husband thought of the fragrance. “He does [like it]. I just gave him a bottle this morning to give to a friend,” she said. “He knows there’s going to be a lot of jokes about it.”

But she did draw the line at the couple eventually launching his-and-hers fragrances, à la David and Victoria Beckham. “I don’t foresee that,” she deadpanned.

Also in London, the singer mused on the name she’d chosen for the scent. “I like a good play on words — I’m mainly a lyricist-type person, so I was looking for something that was a double entendre, and Purr has so many different ways you can see it,” said Perry. “It’s a perfume, and I’m obsessed with cats — I’m trying to make that whole cat lady personality look cool now.”