Purr by Katy Perry will launch in November at Nordstrom and nordstrom.com. 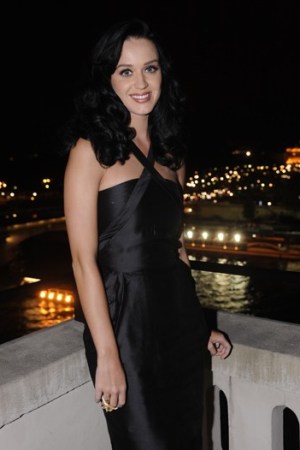 “I am a product whore,” Katy Perry said with a laugh. “I am a consumer of a multitude of beauty products and I’m always looking for the next great thing that will make me into the young Elizabeth Taylor I would love to be. I must have about 100 products on my counter right now.”

This story first appeared in the July 22, 2010 issue of WWD. Subscribe Today.

And she can soon add another one: her first fragrance. The 25-year-old Santa Barbara, Calif., native will launch Purr by Katy Perry in November at Nordstrom and nordstrom.com. Inspired by Perry’s Catwoman stage costume, Purr will be unveiled to long-lead beauty editors this evening. It’s a little project she squeezed in between doing a new album and preparing for her upcoming nuptials to actor-comedian Russell Brand — about which Perry was decidedly mum.

But she was more than happy to talk beauty. “I have about 50 fragrances and I’m intrigued by the mystique scent has,” Perry said in an exclusive interview with WWD on Wednesday. “I saw a lot of my peers getting into this world, and, as with my music, I thought I could bring my touch to the category and make it competitive.”

Certainly, Perry has never had any qualms about standing out and that holds true for her fragrance.

The cat-shaped bottle has jeweled eyes, metallic accents and opulent lavender shading. Of the name, Perry noted, “I’m a very lyrical-based person, and the whole ‘purr’ thing kept coming back — [the sound is in] perfume, perfect, even Perry if you say it a certain way. It just seemed logical. The hardest part was keeping it under wraps for a year [during the development process]. I kept wanting to tell someone!

“There are amazing fragrances backed by other celebrities, but what I’m bringing is not like any other,” she continued. “It wasn’t just like, ‘I love gardenias.’ That would have been the easy route. I really wanted to develop a scent that was completely unlike anything I’d smelled before and not one that smelled like a knockoff of another scent. I’d never want to do anything ‘just because.’”

That’s not to say she’s not fond of other efforts: “I’m not embarrassed to say that I went out and bought [Beyoncé Knowles’ first scent] Heat and Kim Kardashian’s scent earlier this year. I’ve worn Clinique Happy, Ralph Lauren’s Romance and Chanel’s Coco Mademoiselle. My sense of smell is so important to me. A guy can walk into an elevator wearing Acqua di Gio, and I’m immediately like ‘You’re my first boyfriend.’ I want my fragrance to have that effect on people.”

In fact, it is fellow singer Gwen Stefani who is serving as Perry’s role model. “She is my example of how I want to do things, especially the way she did it with Harajuku Lovers [the fragrance collection Stefani does with Coty Prestige],” said Perry, who, like Stefani, is an aficionado of Japanese anime and culture. “She is so detail-oriented and so in touch with that which is hip and cool. I hope I can grab some of her baton — she’s been my example of how I’d like to do things in fashion and beauty.”

As for doing her own fashion line, she noted, “I would like to do it, but I don’t have time to do it just yet,” she said. “You can’t do everything — if you try, something suffers. Whatever I decide to do, I have to be 100 percent there; my fingerprints will be all over it. Right now, my focus is on music and beauty, because everything is happening so fast right now.”

Developed with Firmenich, Purr has top notes of peach nectar, forbidden apple and green bamboo; a heart of jasmine blossom, pink freesia and Bulgarian rose, and a drydown of vanilla orchid, white amber, creamy sandalwood and musk. Eaux de parfum in three sizes will be sold: 1 oz. for $36, 1.7 oz. for $45 and 3.4 oz. for $65. Ancillaries, including body lotion and bubble bath, are set for a holiday launch. Future launches could include Perry’s favorite fruit motifs.

“I’m very inspired by the Japanese world and all things completely cute,” she said. “All things edible for me are also intriguing. So if there are little dancing strawberries, I will be happy. Peppermint is cute; cotton candy is adorable. We like to keep it cute and classy.”

“Distilling Katy’s personal style for her own fragrance was the ultimate goal,” said Ilia Lekach. “Katy worked with our perfumers to capture the distinctive notes of her favorite perfumes and hand-sketched the bottle design by herself.”

Personal appearances are a possibility, Perry said. “When I was growing up, Nordstrom was always the best place to go shopping,” she said. “I love the fact that I get to debut this there.”

The fragrance is likely to roll out to wider distribution in spring 2011. An ad campaign will be shot by Miles Aldrich on Friday, Perry noted.

While Perry and executives declined to discuss sales projections, industry sources estimated that the scent could do $10 million or more at retail in its first year on counter.

Next stop: music. Although Perry’s latest album, “Teenage Dreams,” hasn’t yet dropped, its first single, “California Gurls” — released in May and also featuring Snoop Dogg — is already a hit and the all-time Mediabase Top 40 airplay record holder. Perry revealed the CD’s cover on her Web site, katyperry.com, at 4:30 p.m. EST Wednesday. She’ll begin a new tour in the spring and has just shot a video for “Dream,” another cut from her upcoming album.

Her first album — called Katy Hudson, which is the singer’s real name — was released in 2001, while her sophomore effort and the first launched under her stage name, “One of the Boys,” yielded a fistful of hits, including “I Kissed a Girl,” “Hot N Cold,” “Thinking of You” and “Waking Up in Vegas.” Perry’s hoping for similar results with the new CD, which will be scented: “Not with Purr, but with a cotton candy-based scent. It smells a little like My Little Pony,” she said. “But I wanted to intrigue the senses on a few different levels [with this CD.]”

Perry is also a spokeswoman for Proactiv, the skin care line; she assumed the role in January. “I live by it and die by it,” she said. “If I’m in the Bahamas or something and run out of it, I have it FedEx-ed immediately. For years, I saw the infomercials and made fun of it — I was like ‘Sure, Jessica Simpson, it really works.’ As soon as I tried it — which was before they asked me to represent it — I ate my words completely. I’d tried microdermabrasion, antibiotics, everything — and this is the only thing that worked. I’ve actually sent cases of it to my friends who have similar skin issues.”

She is also making her movie debut as the voice of Smurfette in the animated feature “The Smurfs,” slated for a 2011 release. “I want to do more film work, but it probably won’t be this year,” she said. “No time.”

Oh, and she confesses that famous light-up dress she wore to the Costume Institute gala at the Metropolitan Museum in May almost didn’t come to fruition: “Johnny [Wujek], who is my good friend and stylist, and I were originally planning on another dress,” she said. “Then the Icelandic volcano happened — and we had to jump ship to another idea. I saw a piece on cocoperez.com — I’m a big fan — and remembered a light-up dress from a museum. We then had my dress made.”

All in all, Perry is motivated to prove her critics wrong. “I paid my dues and, because of some of my choices, I knew I wouldn’t be the critics’ darling,” she said. “My goal was to win people’s respect — I wasn’t going to be seen as a one-trick pony. And people are now changing their minds about me, which is exciting. They’re seeing that I’m not pop star lame or hipster cool — that I’m somewhere in the middle.”