The singer discusses her career, fashion ambitions and her new fragrance with new scent partner Coty Inc. due out in August.

By Julie Naughton and Pete Born on July 12, 2013
View Slideshow 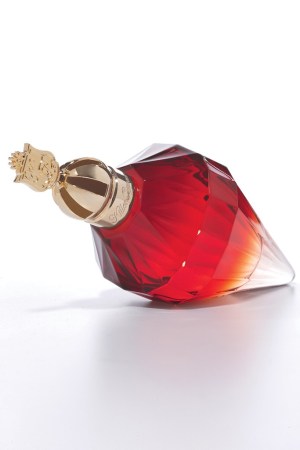 Katy Perry would like to make one thing absolutely clear: She doesn’t allow her life to be ruled by fear.

While some celebrities have made questionable decisions because they’re not positive of their career longevity, Perry is not one of them.

This story first appeared in the July 12, 2013 issue of WWD. Subscribe Today.

“This is how I view my career: not as a ticking bomb,” said Perry. “A lot of people do things out of fear. A lot of people make choices [based on thinking] they won’t have a career in five years. I know where I am, I know what I do is worth something and does not have an expiration date on it. I’m not making choices — in any capacity of my life, with any kind of endorsement, with any kind of product — out of fear.”

That includes her new fragrance with new scent partner Coty Inc., due out in August. Called Killer Queen, the scent’s name references the classic rock song written by Freddie Mercury.

“Killer Queen has been in my vocabulary since I was 15, because of the song ‘Killer Queen’ by Queen,” said Perry. “Freddie Mercury painted the lyrics of this woman who I wanted to be. She seemed very powerful, and she captivated a room when she walked in. I named my company Killer Queen after those lyrics. I feel like, after all this time, it was appropriate to use that name in association with something I did. I feel like I’m falling, finally, into that woman Freddie painted.”

Perry grows animated when talking about her newest fragrance, noting that each of her three fragrances has represented a certain stage in her life. Perry launched her first fragrance, a floral juice dubbed Purr by Katy Perry, in November 2010. A second fragrance, a gourmand scent called Meow, launched a year later. Both represented a more youthful, playful side of Perry.

But it’s her latest that represents Perry today. “Killer Queen is powerful, edgy, sophisticated — and that’s exactly where I’m trying to be now with my music,” said Perry. “There were two different aspects in creating the fragrance. It’s almost like [using] two different parts of your brain — the packaging and bottle and marketing, but essentially all that doesn’t matter unless you have the juice.”

Comparing it to songwriting, she remembered, “I spoke one time at a songwriting thing and the kids were asking me questions about being an artist. [I told them] all of the costumes and the glitter and the glitz and glam is great, but if you don’t have the talent, you just look like a freak.”

Indeed, her licensing partner, Coty, is betting heavily that it will be a hit. While neither Perry nor Coty executives would discuss figures of any kind, industry sources speculate that the company is aiming for a first-year target of $80 million globally in retail sales, or $48 million in wholesale value.

Describing the scent’s positioning, she said, “It’s for someone sophisticated, who wants a little edge and can wear it all day, and still wants that sexiness.”

And don’t think it was as easy as throwing a few unusual notes in a bottle. “It took us something like 30 or 35 tries to get it right,” said Perry. “I wanted some floral [notes], like jasmine, but I also wanted red velvet flower, which is incredible — it gives it the edge that makes it Killer Queen. It does have a bit of a gourmand thing to it — but gourmand like high tea at Claridge’s. I wanted the scent to have a little bit of ambiguity. I was attracted to scents in the last couple of years like Alien by Thierry Mugler and Black Orchid from Tom Ford. They’re too strong for me to wear all the time, and I didn’t want to them to be [copies], just to have a hint of ambiguity like they do. It’s sophisticated, but it’s not alienating my main group of people. The patchouli heart gives it ambiguity and this thing called cashmeran is really cool. It has this real curve ball in it that I think is sophisticated but still supersexy.” She added, “You can’t buy anything that makes you who you are, but you can highlight what you’ve already got inside you. I want this particular perfume to highlight the power that’s already inside of you.”

In July 2012, Coty acquired Perry’s fragrance license from Gigantic Parfums and, in an unusual move, continues to sell both scents launched under Gigantic. Steve Mormoris, senior vice president of global marketing, American Fragrances, for Coty Prestige, said, “She’s incredibly talented, and we are expecting great things from Killer Queen. We believe this is a top-10 launch.” Renato Semerari, president, Coty Beauty, agreed, “She’s brought the same passion and creativity she brings to her work into the creation of this fragrance. We look forward to developing her line of signature fragrances and establishing her as a leading beauty brand.”

“When I was launching Meow, [many] people following me on Twitter couldn’t order it because they couldn’t find it,” said Perry. “Thankfully, I have a lot of people all over the world who are interested in these fragrances, but they didn’t have the accessibility to them.…Coty has the distribution to do that.”

She also acknowledges that Coty’s multifaceted expertise in fragrance, color and skin care afford her opportunities in the future. “I’m a product whore,” she said. “I have a [beauty] regimen that spans an hour and a half, and nothing goes out of order.” She chuckles and admits that’s hard to do “if you’re sleeping over at a new boyfriend’s house.” But no new categories are imminent. “I wouldn’t say never on anything, but my heart isn’t drawn to that area just yet,” said Perry. “I’m really excited for the newer, bigger, better launch of my fragrances.”

The jewel-shaped bottle — inspired by a queen’s scepter — is rendered in red and gold and rests on its side. A gold crown with a crest created for Perry and containing figures of cats, a music clef and hearts and daggers tops the bottle.

“One thing I was really inspired by was Jean-Paul Gaultier’s fragrances, time after time after time,” said Perry. “There was the snow globe [Fragile], he was doing a bust [Signature], he was doing this or that. But he always did something that made me want to keep the bottle as a keepsake afterwards. I felt cool if I had one on a shelf in my room, even if there was no juice left in it. That inspired me. There isn’t any point for me to put out something that doesn’t stand out — because that is so not like me.”

Eaux de parfum in four sizes — 0.5 oz. for $20, 1 oz. for $39.99, 1.7 oz. for $49.99 and 3.4 oz. for $59.99 — will be offered, as will a 6.7-oz. body lotion, $25, and a 6.7-oz. shower gel, $25. Killer Queen will launch in August in about 3,000 U.S. department and specialty store doors. Globally, the scent will be sold in about 20,000 doors and in more than 50 countries, said Mormoris. There will be a Web site for the fragrance, as well as Facebook and Twitter campaigns. At press time, Perry had more than 38.7 million followers on Twitter. “I’m very particular about my Twitter. I like Facebook, and I use it and I appreciate it, but it’s mostly just to let everyone know what’s going on, what’s coming up. My Twitter is like a smorgasbord of things I like, things I don’t like, what I want to say, what I want people to hear, if I want to be funny or retweet, talk to my fans and have impromptu Q&As. It’s also a way for me to announce things, to share things. It’s like picking up the phone to your closest friend, because it’s so easy and so direct.”

Print advertising, shot by Tim Walker, breaks in September fashion, beauty and lifestyle magazines. TV advertising, which is slated to begin running Aug. 24, was shot by Jonas Akerlund. Both feature Perry and the cheeky tag line “Own the throne.”

Fashion? “I would like to [branch into fashion], but this circus act can only juggle so many balls,” Perry said with a laugh. “It’s to be determined, but we’ll see how it goes. It’s a long process, and I want to find the right place for me. There are a lot of people I really look up to in fashion — [like] Alice + Olivia and The Row — and I like that price range, too. I love what Victoria Beckham did, but I also have to figure out with myself what actually is the market I want to be in. Is it a high fashion market or is it an accessible market? Nothing is [currently] being created; there aren’t even sketches on the table, nor a contract.” She fondly recalls the light-up dress she wore to the 2010 Met Ball: “That was true punk,” she said. “And when I woke up really hung over the next day, I saw I was on WWD’s cover.”

While Perry played coy about her upcoming album (“I’m still working on it! You’re Women’s Wear Daily, not Rolling Stone!” she said in a mock-severe voice), reports are that it will be more “mature” than Perry’s earlier pop confections, and could include songs inspired by Perry’s ex-husband, Russell Brand, and cowritten with songwriter and pal Bonnie McKee.

“Everything is a conversation, that’s all I can say,” said Perry. “I’m not saying I’ll be good at all of it, but I’m going to swing.”