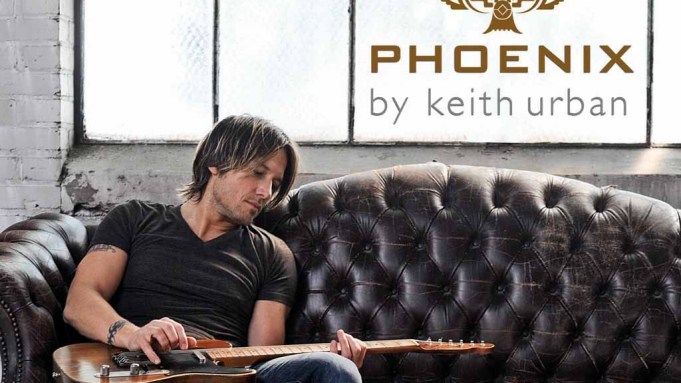 “Who’d have thought I’d be calling Women’s Wear Daily at any point in my life?” said Urban, 43, at the beginning of an exclusive phone interview from the Nashville home he shares with his wife and fellow Aussie Nicole Kidman and their two young daughters, Sunday Rose, three, and Faith Margaret, seven-and-a-half months.

The name of his fragrance clearly references Urban’s past, present and future, and is also a nod to the Hopi Indian thunderbird tattoo on his left forearm, one of four visible tattoos Urban has. “The thunderbird obviously has close ties to the phoenix — the symbolism of the phoenix,” said Urban. “I’ve always loved symbolism and mythology, the symbolism of the phoenix being something that succumbs to the challenges and burns in the fire, but then is resurrected from the ashes and rises up from the ashes even stronger than before. The ‘what doesn’t kill you makes you stronger’ story of the phoenix is something else that I think fits really well with a man’s cologne. Certainly, I can relate very strongly to that — going through hard times and coming out the other end of it much, much stronger for the experience.”

Urban has never shied away from discussing addictions in his past, which he has said included cocaine and alcohol — nor has he failed to credit who helped him get and remain sober after several attempts: his wife, Kidman. Urban calls Kidman and their daughters the center of his world. Touring, he notes, requires “an enormous amount of energy —physically, mentally, emotionally. I’m very blessed to have such a great home life and family. I can come back here and fill up my well, and it’s full by the time I hit the road again,” he said.

Urban is currently on the 50-city-plus Get Closer 2011 tour, and once it’s over plans to get in plenty of family time before turning his attention to the next project. “The way in which my wife and I tend to do things is we try to thread it all together,” he said. “We don’t think in terms of ‘Well, we’re going to work really hard for six months and then take three off.’ Life is so unpredictable. We try to do some work, then have some family time, then do some work, then do more family time. We try and thread our summers like that as well. When the tour finishes, that’s always sort of a bittersweet moment; it’s kind of sad to see the end of a tour when it takes so long to put them together. But then the decompression that happens after is an amazing feeling. It’s quite euphoric. And I get to devote all my time to my family. Even being sleepless, there’s a different sort of [mind-set] — it’s not irritating to be sleepless with these two little girls. I can be physically quite tired, but still have this gratitude and euphoric glow about the way I feel about life now. And it never used to be that way before I had a family.”

Urban also points out that the Phoenix moniker allowed him to avoid naming the fragrance directly after himself. “The last thing I want to make a man do is: When someone asks him what he’s wearing is for that poor man to say, ‘I’m wearing Keith Urban,’” he said. “That just seems really awkward to me. I wanted to allow a man the dignity to respond with something that is a little more appropriate. Not too hoity-toity, not too chic and metro, something that’s got a nice, masculine simplicity to it. I felt Phoenix fit that really well.”

Deciding to do a fragrance was an easy decision, said Urban, given his lifelong affinity for scents. Before creating his own, Urban said his tastes “ran the gamut.”

“I wore Brut, and then I wore Calvin Klein Escape for Men for a long time,” he said. “More recently, it’s been a lot of the Tom Ford scents, as well as Dolce & Gabbana and Dior fragrances.”

While he admits that his tastes run toward luxury scents, Urban was determined to create a fragrance that would be both affordable and accessible to his fans. “I grew up with a lot of AM radio in the late Seventies — FM didn’t come to Australia until the early Eighties,” he said. “I think that it created a commerciality in me, about the way in which I make music and create. I’m interested in things that have more appeal than to just a couple of people. I think to go from that in the songwriting process wasn’t much of a stretch in the cologne area.”

Urban chose Boom LLC — an 11-year-old company that develops custom brands for the fragrance, bath, color, cosmetics and skin care categories for clients such as Abercrombie & Fitch — as his licensee because of their willingness to “allow me to create it from the ground up,” he said, explaining how he began the creative process by first bringing things he loved to Boom and then to International Flavors & Fragrances Inc. to start putting together all the notes he liked. Leathery notes were his favorites. His firm ideas didn’t go unnoticed by Boom: “Keith had a real vision about how he wanted to put his name out there from the very beginning,” said Rebecca Killian, executive vice president of Boom LLC.

The development process was a revelation, he said. “The colognes that I gravitate toward have a masculinity to them, but there’s a sensual side too,” said Urban. “I don’t like the word unisex, because that’s not what this fragrance is, but there are elements of that softer side. It’s not too rugged and not too soft — it’s somewhere in the middle ground. And I wanted to make sure that the scent would have longevity in the course of a day. Everybody’s skin is different, so that was one of those learning curves for me, as was me saying ‘I want this, and I want that,’ and them saying, ‘This is the actuality of that specific thing.’ It was like someone who’s never made a record before. Theoretically, you get what it takes to go into the studio and make a record. But the actual process can be very different.”

The leathery gourmand juice, which Urban created with IFF’s Loc Dong, has top notes of blackberries, cognac and plum suede accord; a heart of dates, dark chocolate, fir balsam and musk, and a drydown of cashmere woods, tonka and amber gourmand, which imparts a hint of leather. The heavy glass bottle has vertical lines intended to represent guitar strings along the back, with an etched phoenix on the front and a weighted cap with a brown leather accent. The outer carton is of leather-textured paper with an embossed phoenix. Cologne sprays in three sizes — 1 oz. for $24, 1.7 oz. for $35 and 3.4 oz. for $48 — will be sold.

In total, the scent will be sold in about 7,000 doors globally, including mass market doors in the U.S., at Shoppers Drug Mart in Canada and at David Jones and Target in Australia. In most markets, the scent will be launched in mid-September. While Urban and Killian declined to discuss sales projections, industry sources estimated that Phoenix could do upward of $10 million at retail in its first year on counter.

Urban is promoting the fragrance at his shows by scenting the concert venues and distributing scented tattoos. He admits he wasn’t initially sold on the idea. “Boom presented all these ways of which we could issue samples at the concerts and I got a little cringed with that,” said Urban. “I stand on the corner of art and commerce, as a lot of artists do — and sometimes I feel like situations want to push you further up into the commerce avenue, and I like being right on the corner. I wanted to get this fragrance to people without it feeling jarring and out of place [at the concerts]. A lot of people ask about my tattoos, and I thought, ‘We can just put this thing in a tattoo and give it away.’ That seemed like a really cool, original, practical way to go about it for me. Standing at the door and handing out [traditional samples] felt a little like a swap meet.” In addition to the thunderbird, Urban’s tattoos include “love,” on his right wrist, “Nicole” with a tribal band, which circles his right bicep and an eagle on his left shoulder blade.

Urban is also giving people the opportunity to purchase the scent on his fan Web site, keithurban.net, this month, giving them a jump on the retailers. “I have the greatest fans in the world — I know every artist says that, but I actually do,” he said with a laugh. “I wanted to give them the first inhale of it.”

National advertising for Phoenix will break in October fashion, lifestyle, men’s and music books. Two shots will be used: one of Urban on a brown leather couch shot by Jean-Philippe Piter, and a second of him playing an electric guitar shot by Max Vadukul. Boom plans extensive radio advertising and an equally extensive social-media campaign, said Killian.

Urban said he has a yen to do additional fragrances. “I hope this one allows me to do more, because it was a process I really, really enjoyed. It’s a little like making a record — the first one was a crash course in a lot of things.” And the next one may be a women’s juice, he said. “We have been working on a women’s scent, and I hope we get to release it,” he said. “I’m fortunate to have someone really close to me who is very good at these things.” That would be Kidman, who, among other things, was once the face of Chanel No.5. “[Nicole] has been helping me quite a bit in that area, so I think it’s just a matter of time before we can release the women’s one, as well.”

His future endeavors may well stretch past music and fragrances, although he emphasizes that any new projects have to feel authentic. “For me, it’s got to come from what I naturally do,” he said. “The cologne was such a natural extension of my lifestyle. If I were going to do some sort of an apparel thing, it would have to be based on my lifestyle. I wouldn’t do it just so I could have some sort of little clothing empire. I’ve always been a fan of the right cut of things, and the way fabrics are. I’ve always worked very closely on my merchandise to make sure we have really soft, comfortable shirts, because I can’t stand those stiff, boxy, cheap-ass concert shirts that you get on tours. I’d rather maybe make a little less on the shirts and make sure that they have quality, that people want to wear them, that you feel good when you put them on.

“As you can tell from my big long answer here, it probably is inevitable that I will do a clothing line,” he said with a laugh.