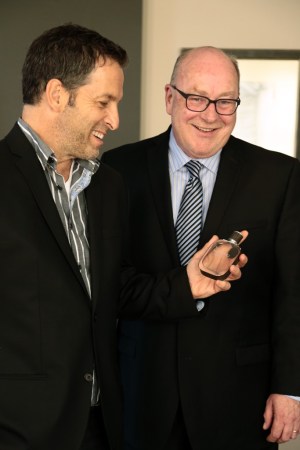 Evolution is what you make of it.

That proposition is woven into the positioning of Kenneth Cole’s men’s fragrance, fittingly called Mankind. “The challenge we all deal with everyday is: how do we understand the universe as we see it and how do we relate to our audience, our friends, followers and customers?” the designer said during an interview earlier this month. “How do we relate to them not just in the sense of where they have been but where they are going and how do we talk to them in a more modern and relevant manner? The fragrance is meant to speak to that Renaissance guy. He is accomplished but humble, he is strong but sensitive. He’s got a very clear sense of…where he is, where he’s going and how he’s going to get there. He’s very much focused on looking good but also doing good.

“Today, everybody curates their own audiences. So everybody’s got this social platform, if it’s not Facebook, it’s Twitter or it’s Instagram or Pinterest. They define themselves, they bring together all that which inspires them, and they aggregate it all in this one place. Then they aggregate an audience; they accept you or they don’t. They let you follow them and they identify you in return, and they introduce themselves and update themselves everyday. In effect, everybody now is their own brand. Our hope now is that you will allow us to be part of your brand. In a sense of being themselves, they want their fragrance not to arrive before them and to linger after they are gone.”

That message is meant to be carried through the fragrance’s marketing campaign, which will embrace the digital world in the form of a Mankind microsite. The page will serve as a hub, carrying video content, campaign imagery, a blogger sweepstakes contest and a Man Up for Mankind contest.

Cole’s new licensee, Parlux Ltd., is developing various aspects of the campaign, but one of the more unusual features is an online test that humourously measures how much a participant has evolved, showcasing the results an illustration of an ape. “You see the ape becoming a man as you answer the questions,” said Donald J. Loftus, president of Parlux Ltd. and executive vice president of Perfumania Inc. “One question is: ‘Your girlfriend calls up and says she’s sick and she can’t go out tonight. Do you 1) Take her a bowl of chicken soup; do you 2) go out with old friends, or do you 3) call an old girlfriend?’”

Loftus noted that the tag line of the fragrance campaign, which is meant to be very tongue in cheek, is “Join the Evolution.” “Your ape will either grow more hunchbacked or erect,” he added, noting that there will be local hero contest, with prizes like a donation to the winner’s favorite charity.

The fragrance also represents an evolution for Cole. It’s his 10th men’s scent, and his first effort under Parlux, which also is new ownership. “We call this the new Parlux,’ said Loftus, who added that this is the reconstituted company’s first designer fragrance. Cole’s fragrance license was last held by Coty, which originally acquired it from LVMH Moët Hennessy Louis Vuitton.

The fragrance was developed at Givaudan by Claude Dir, who has since moved to Mane, working with Jennifer Mullarkey, fragrance developer for Parlux Ltd. The theme of evolution was built into the formula. Mullarkey said, “In past freshness was a key element [in Cole fragrances]. For this one we wanted to push the envelope. It is an evolution, continuing on this modern freshness, but bringing in this underlying warmth and richness that is probably the furthest we’ve gone for a Kenneth Cole fragrance. That’s what the turning point here is and the evolution.

“The fragrance is an aromatic woody. When we are talking about freshness we are talking about cardamom, tarragon leaves, zesty ginger and a little splash of pineapple,” she continued. “So you have this fresh aromatic element. That leads into a more masculine element of cedarwood, vetiver root and cinnamon and then this rich warm sensuality. That comes from sandalwood, oak moss, tonka and then of course your skin musk.”

Cole designed the bottle with the help of Chad Lavigne. There will be three fragrance stockkeeping units, priced $44 for a 1-oz. eau de toilette, $54 for a 1.7-oz. size and $72 for a 3.4-oz. version. The six-sku line will be rounded out by a 6.7-oz. hair and body wash for $18, an aftershave balm for $40 and a 2.6-oz. deodorant for $22. In the U.S., the fragrance will be shipped in February to a distribution of 2,500 doors. Loftus also said that a European country is being considered, and its identity will be disclosed at the Tax Free World Association meeting in Cannes, France, later this month.

While no one would talk dollar figures, industry sources estimate Mankind has a first-year U.S. sales target of $18 million to $20 million at retail.