The Story of Unbreakable by Khloé and Lamar

Khloé Kardashian and Lamar Odom were determined to develop a unisex fragrance together. 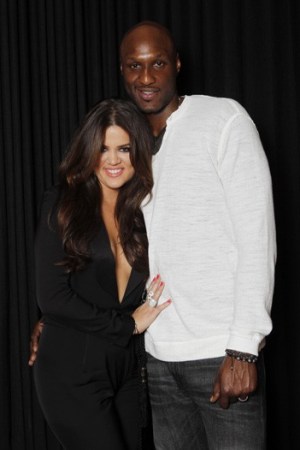 Don’t tell Khloé Kardashian and Lamar Odom they can’t do something.

The headstrong married couple — she a frank reality star never afraid to offer opinions or expose parts of life often hidden behind doors (like getting a botched bikini wax) and he a professional basketball player groomed on the courts in Queens who’s been instrumental in the Los Angeles Lakers’ last two championships — aren’t likely to take no for an answer.

About a year ago in a meeting with Kardashian’s and Odom’s fragrance license holder, Lighthouse Beauty, to discuss the idea for their perfume, Odom declared his desire to create a unisex fragrance with his wife and didn’t get a warm reception. “Lighthouse Beauty was like, ‘Absolutely not. No celebrity couples have ever done a unisex scent before,’ ” recalled Kardashian during Unbreakable by Khloé and Lamar’s launch party Monday evening at The Redbury Hotel in Hollywood. “And Lamar said, ‘This is absolutely what I want to do. I don’t want to do what everyone else has done.’ Lamar was more into it when he was told no celebrity couples have done it.”

Turns out maybe Odom was onto something. Definitely there was a risk that a unisex fragrance could alienate both men and women used to fragrances delineated by gender. But the unisex concept had the upside of providing a point of difference in an oversaturated fragrance market suffering from a flood of celebrity fragrances. “People responded well to me and Khloé, and our energy, and I thought the timing was perfect for us to do this together,” said Odom.

Lighthouse Beauty chief executive officer, Philip Zellner, has come to understand Odom’s point of view on the appeal of a unisex product from him and Kardashian. Retailers “are actually accepting it and very open to it,” he said. “They are welcoming the uniqueness of it because it is something that hasn’t been done, and change is good. The industry can get stale sometimes, and this is a new idea.”

The first two deliveries of Unbreakable by Khloé and Lamar, which is available in a 3.4-oz. eau de toilette spray for $45 and a 1-oz. spray for $30, that entered Perfumania stores in time for Valentine’s Day sold out, according to Zellner. After an exclusive with the retailer is over, he said Unbreakable would roll out to 2,500 doors before the year is out and “has the potential to do as well as” Kardashian’s sister Kim’s namesake fragrance. Industry sources projected that the Kim Kardashian by Kim Kardashian scent, which hit the market last year and is sold at Target and Macy’s, would generate roughly $50 million in first-year retail sales. Chicago-based market research firm SymphonyIRI Group data shows that sales of the top 20 women’s fragrances in mass market retailers, supermarkets and drugstores excluding Wal-Mart increased 0.3 percent to nearly $311 million, and the top 20 men’s fragrances in the same distribution dipped 1.76 percent to slightly under $193 million.

Unbreakable’s sales are certainly not the easiest bucks Lighthouse Beauty will ever earn. The around 11-month process of composing the fragrance wasn’t a walk in the park. The trouble was that Lighthouse Beauty, working with perfumer Lisa Popoli from Givaudan on Unbreakable, had to nail down a scent that didn’t repel either women or men, explained Zellner. “Obviously, a man doesn’t want to wear anything that is too feminine and a woman doesn’t want to wear anything that is too masculine. So you have to find that happy medium,” he said.

Kardashian worried that the happy medium wouldn’t be found. “Towards the end, we were like, ‘We’re never going to get it.’ Maybe that’s why people don’t do it, because it’s just not there. We really were nervous,” she said. “Then, finally, we started mixing things, and we were like, ‘We’re getting there.’ When we did this combination — what Unbreakable is now — we did a lot of dark chocolate elements, and the dark chocolate does pick up male pheromones and women pheromones. It is kind of muskier on a man, but lighter and more citrusy on a female.”

Unbreakable by Khloé and Lamar has notes of nutmeg, bergamot, orange, geranium, jasmine, dark chocolate, cedarwood, amber, sandalwood and musk. The clear glass bottle is emblazoned with the fragrance’s name and a graphic inspired by a tattoo the couple shares of their first initials, and contains an architectural conical cap.

Photographer Walter Chin snapped pictures of Kardashian and Odom that cover the boxes and will be in print advertising, which Zellner said remains in the planning stages but will break in the next several months. A sampling campaign doling out hundreds of thousands of samples at stores and events has already begun.

The Kardashians, of course, are themselves an unparalleled marketing machine. “Khloé & Lamar,” which will make its debut Sunday on the E network, is the latest installment of a Kardashian reality programming franchise that has scored high cable ratings, especially with coveted female viewers from 18- to 34-years-old, since “Keeping Up with the Kardashians” premiered in 2007. The shows have become powerful platforms to promote the Kardashians’ many product endorsements, and the development of the Unbreakable fragrance is woven into the story line of “Khloé & Lamar.” Kardashian divulged, for example, that audiences are going to see a fight with Odom over Unbreakable’s cap that she called one of the couple’s first big fights since their wedding, on Sept. 27, 2009.

“He didn’t like a cap that I picked, and I had a major, major bitch fit,” said Kardashian. “But it wasn’t about the cap. It was [about] when we were trying to come up with it, he’s at practice, so I’m trying to make decisions without him to make it easier, and it never works.” Ultimately, she continued, Odom’s preferred cap won out — and it was for the best. “We’re very good at meeting at the middle. I love the cap that we have, but I was just so frustrated about the other stuff,” she said.

Obviously, “Khloé & Lamar” viewers won’t just be watching for tales about the fragrance. They are tuning in for a peek into the famous couple’s private moments — and Odom and Kardashian believe there’s a lot to learn about them besides what people observe on the basketball court or read in magazines. “Lamar’s the craziest, funniest person,” said Kardashian. “He dances and sings, and is totally nuts.” Kardashian’s mood swings are also exposed. “The other day I cursed myself out. He thinks that’s sexy, and any guy would run away from that,” she said. Odom agreeably chimed in, “Her having an attitude is probably what attracts me to her the most.”

Odom and Kardashian aren’t fazed by the poor history of married couples on reality TV. (Divorce lawyers may be as happy with reality programming as viewers, with the breakups of the likes of Jessica Simpson and Nick Lachey and Jon and Kate Gosselin padding their wallets.)

“If you’re going to live your life by the numbers and statistics, then you should stay by yourself and be a loner because for the normal person with a nine-to-five regular job, marriage isn’t working out,” said Odom. Kardashian said, “If there are cracks in your foundation, with a TV show or without, you’re going to find out, and with a TV show you find out faster. I’m not a big superstitious person. I don’t have a fear of that stuff.”

As for the future of the brand, Odom and Kardashian are laying the groundwork with the show and the fragrance; Kardashian asserted the pair wouldn’t sign onto projects they aren’t “150 percent passionate about.”