The executive is also to introduce a new fragrance line called Addictive State of Mind. 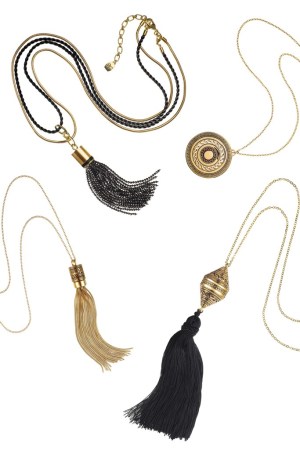 PARIS — A beauty conundrum Kilian Hennessy set to solve is how to make perfume visible.

“We are living in a world where things that are invisible don’t exist,” said the executive, referring to the plethora of images on everything from Instagram to Facebook. “Perfume is an accessory in the same way shoes and handbags are. But it’s an accessory that is not visible.”

That’s set to change, however, with Kilian Jewelry — a line of scented necklaces and bracelets — due out starting midmonth.

It marks a break from the well-trodden business strategies involving either a fragrance brand branching out with makeup and skin care or with ancillary products.

“The question for me was: Can I invent my own business model?” he said, reiterating his brand’s tag line, “Perfume as an Art.”

“I want to bring excitement into the world of perfume,” he said. “So I had this crazy idea two years ago.”

Dream became reality with The Jewels of l’Oeuvre Noire, a capsule line of four necklaces for women, each one coming in 18-karat-gold plate and pure rhodium. There’s an onyx bead tassel necklace (whose cord is microencapsulated with one of six By Kilian scents), plus two other tasseled models and one with a locket. Each involves a cage system made of perforated metal that holds a ceramic piece onto which fragrance can be applied.

The Leathers of l’Oeuvre Noire are four bracelets — in a selection of five scents — for men in either brown-and-gold or black-and-silver finishes. Their fragrance is said to last up to one year. Hennessy designed them all. Tassels have appeared on By Kilian fragrances’ boxes, and the metal shield design, another leitmotif on the brand’s packaging, is on some of the jewelry, as well. “It’s always essential shapes,” he said.

The jewelry is set to launch Sunday in the By Kilian boutiques in New York and Moscow, plus online through bykilian.com. Its rollout will include London’s Harrods and Bergdorf Goodman in September and the upcoming Kilian boutiques — in Paris; Lugano, Switzerland; Doha, Qatar; Seoul, and Dubai — through yearend.

Hennessy would not discuss sales goals, but industry sources estimate the jewelry could generate $1 million in retail revenues during its first six months.

And the line won’t stop there; he plans to launch fragranced rings and earrings for the holiday period.

Hennessy is also gearing up for a fall introduction of a new collection of fragrances targeting men, called Addictive State of Mind.

“I wanted to work on the theme of addictions,” he said, adding it’s a counterpart to By Kilian’s Garden of Good and Evil collection. “I thought it would be great to work around three smokes.”

Intoxicated takes its cue from the scent of Turkish coffee. Created with Givaudan’s Calice Becker, it includes notes of green cardamom, nutmeg and powdered cinnamon.

Smoke for the Soul gives a nod to cannabis, with notes of eucalyptus, grapefruit, cardamom and mate tea, plus accords of tobacco, birch and cashmere woods. It was concocted with Firmenich’s Fabrice Pellegrin.

The scents come in black and silver refillable bottles.

The new line is due out Oct. 15 in the U.S., U.K., France and Russia, before being introduced in the rest of the world.

Each 50-ml. spray will retail for $270. Reminiscent of a vintage cigar holder, the scent’s outer box is of wood and bronze-finished metal.

Industry sources estimate Addictive State of Mind should make $10 million in retail sales during its first three months on the market.

In 2015, Hennessy plans to launch a scented home collection.