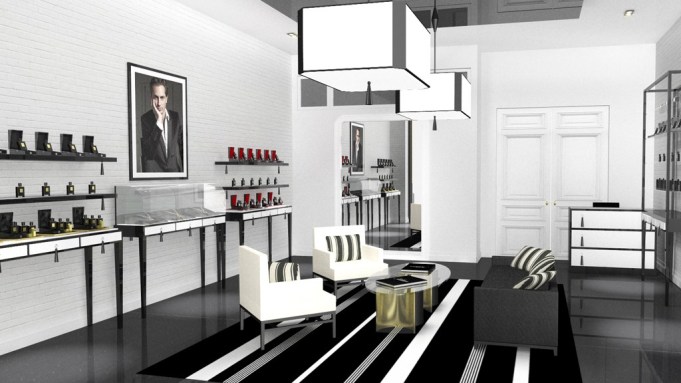 Kilian Hennessy has bottled up the Big Apple for his first freestanding store in Manhattan.

The 450-square-foot unit — slated to open in late November at 804 Washington Street in the Meatpacking District — will stock his brand’s new scent: Apple Brandy by Kilian New York.

“It’s a bit of a wink to the Big Apple and cognac,” said Hennessy, referring to his family’s historic business.

The boutique will have a look similar to the first Kilian location, which opened last November in Moscow’s Crocus City Mall.

“[However,] I wanted every store to have a bit of the feeling of the location,” he added, explaining that in the New York shop, some brick will remain exposed.

While Hennessy would not discuss sales projections, industry sources estimate the store could ring up $400,000 in its first 12 months.

Apple Brandy is the first of a series of bespoke scents “inspired by the spirit, the essence of the city” where he opens a boutique, Hennessy said.

“We are probably going to open in Seoul by the end of the year,” he explained, adding that in the first quarter of 2014, shop openings are expected in Dubai, Abu Dhabi and Doha in Qatar. “My goal is to open 10 [freestanding stores] in the next three years.”

These will likely be in cities such as Los Angeles, London and Paris.

“Ideally, I would love Dubai Duty Free,” he continued.

By Kilian today is sold in 200 doors worldwide, where Hennessy said it generally tops overall fragrance brands’ sales. And the business keeps growing. By the end of August year-to-date, By Kilian’s revenues were up 72 percent.

Industry sources estimate By Kilian will generate $50 million in retail sales for 2013.

Other upcoming projects include e-commerce in the U.S., which will launch officially next Thursday.

On Oct. 1, By Kilian will introduce the scent Playing with the Devil. Then, one month later, it will come out with the Shanghai 1920 limited edition, including a minaudière with one 50-ml. fragrance (of which there is a choice of five) that retails in France for 195 euros, or $256 at current exchange.