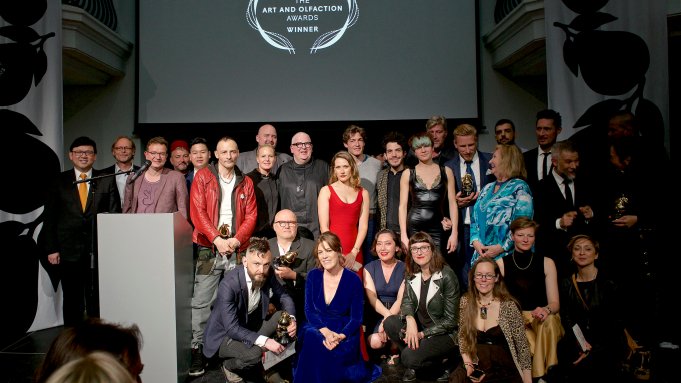 BERLIN — “What I smelled was courageous, creative and brave,” said judge and perfumer Andy Tauer, addressing the crowd at Saturday’s Art and Olfaction Awards. The Swiss niche perfumer was on hand to help deliver prizes for the event’s fourth edition, its first ever away from home.

The awards are a program of the Los Angeles-based nonprofit Institute for Art and Olfaction, which connects and supports independent perfumers and artists, and educates the public about the craft and magic of scent.

This year’s diverse group of finalists came from Europe, the Asia-Pacific region and North America. “We aim to treat their work with respect, regardless of marketing budgets,” said Institute for Art and Olfaction founder Saskia Wilson-Brown, explaining the Awards’ policy of ethical and blind judging procedures.

The winners in the artisan category, for perfumers with their own brands, were Dallas-based Claire Baxter for Sixteen92 Bruise Violet, and Pissara Umavijani for  Mélodie de l’Amour from her French-based Parfums Dusita.

Fathom V from Beaufort London scooped one prize in the independent category for creative director Leo Crabtree and perfumer Julie Marlowe. The other went to Berlin’s J.F. Schwarzlose for Altruist by perfumer Véronique Nyberg.

The German capital is also home to the winner of the Sadakichi Award for experimental work with scent — Wolfgang Georgsdorf’s Osmodrama with Smeller 2.0, a complex system for playing scents that was decades in the making.

A newly created prize, the Contribution to Scent Culture Award, went to a clearly delighted Christophe Laudamiel, who also served on the judging panel with niche notables including Luca Turin, Michael Edwards and Mandy Aftel.

Artists, perfumers and researchers gathered to discuss the conceptual considerations and practical challenges of working with smell, from collaborating to collecting and curating olfactory art to scent storytelling with virtual reality. The wide-ranging discussions touched on the growing fields of niche perfumery and olfactory art, and where they both intersect and part ways. “There is a bit of a split in the field,” commented curator Ashraf Osman. “There’s the scent of art, and the art of scent.”

An example of the former was Dutch designer Leanne Wijnsma who presented her project Smell of Data, a Sadakichi Award finalist, which envisions adding a smell warning to data leaks. It is modeled on the way olfactory cues were developed to protect against dangerous yet odorless gas leaks. Singer Daniela Gesundheit of the band Snowblink, who also performed at the summit and awards ceremony, talked about singing in tandem with a scentscape — to a blindfolded audience. Also, fragrance innovation specialist Olivia Jezler and perfumer Andreas Wilhelm discussed moving fluidly between industry and independent projects.

Friday’s summit was part of Wilson-Brown’s mission to build mutual support and a sense of community for this broad ranging group of creatives who may work at the margins of the fragrance industry, deep within it, or completely outside of it. To that end, she’s decided to further her reach, and will open an arm of the Institute for Art and Olfaction in Berlin.

The presence of innovators here like Ravat, Georgsdorf, Escentric Molecule’s Geza Schön, and the Grand Dame of scent art, Sissel Tolaas, makes a strong case for the expansion. Even New York-based Christophe Laudamiel operates a satellite lab in the city.

“Berlin has the same culture of freedom of innovation and ‘anything goes’  that I find in Los Angeles,” Wilson-Brown said. “So it felt like a really natural fit for our ethos at the institute and the awards.”