Lanvin is going back to its roots with its newest women’s scent, called Me. 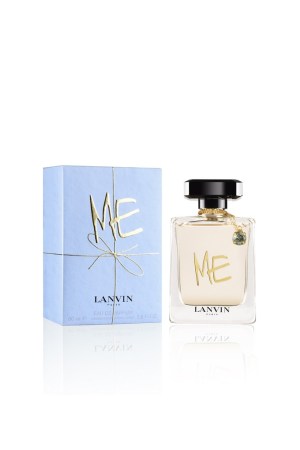 PARIS — Lanvin is going back to its roots with its newest women’s scent, called Me.

“For me, fragrance is a history,” said the label’s creative director, Alber Elbaz, who conceived the project with Lanvin’s fragrance licensee Inter Parfums SA.

Philippe Benacin, chairman and chief executive officer of the company, described Me as “more fashion-related, high-end and worked. It is a new step for us; it is a next level.”

Originally photographed by Steven Meisel for the fashion side of Lanvin’s business, the print ad for Me features model Iselin Steiro kissing her own reflection in a mirror.

“It’s of a woman who thinks of herself,” who is hedonist but not egoist, explained Benacin. “In the communication we want to put forward a lot of sensuality and elegance at the same time.”

IFF’s Domitille Bertier concocted the floral gourmand juice. Its top notes include mandarin and blueberry, while in the middle there are tuberose and rose absolute notes. The base is comprised of licorice wood and sandalwood notes.

Me’s introduction is to take place on April 1 in regions including Europe and Asia. Benacin said it’s an “important launch” in the U.S., where the scent will first be carried exclusively in Nordstrom.

Inter Parfums executives would not discuss sales projections, but industry sources estimate Me will ring up 40 million euros, or $51.3 million, in first-year retail sales.

Inter Parfums has held the Lanvin fragrance license for almost 10 years. It’s been “extremely successful” in markets such as France and Asia, according to Benacin. The franchise includes scents such as Arpège, Éclat d’Arpège, Jeanne Lanvin, Jeanne Couture and Marry Me.