A true millinery maestro, Stephen Jones' creations are worn by stylish women and on the catwalks of designers such as Dior, John Galliano and Marc Jacobs. 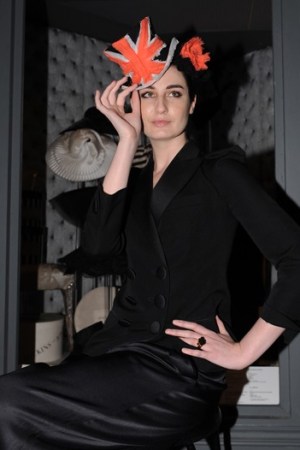 It’s no surprise that Stephen Jones wears his beret at a jaunty angle. A true millinery maestro, his creations are worn by the world’s most stylish women and seen on the catwalks of designers such as Dior, John Galliano and Marc Jacobs, among others. In 2008, he dipped his nose into the fragrance world, when he teamed with Comme des Garçons to create a scent, and in February, Jones unveiled Hats: An Anthology, an exhibition he curated in collaboration with London’s Victoria & Albert Museum. Here, his musings on creativity, the common weal and whose heads he’d love to hat.

HOW DO YOU DEFINE BEAUTY?
It’s one of the most elusive things on the planet. Like luxury, as soon as you try to define it, it evaporates. Beauty can be a beautiful woman, a beautiful man, a beautiful child or beautiful clouds in the sky. It’s also fragile. As soon as we try to examine it, we can destroy it. Beauty can be very transient. Beauty may not only be about grace and purity, but it can be the reverse. Who is to say a bride is more beautiful than a Goth girl going out on a Friday night?

WHAT INSPIRES YOU?
Everything. Life. I never stop being inspired. It’s important to be aware that you can be inspired by anything. If anything is ugly, it’s the closing off of someone’s mind to accepting different things and being infl uenced by them. The blank wall or a white piece of paper allows my mind to accept inspiration.

HOW DO YOU NURTURE YOUR MIND, BODY AND SOUL ON A DAILY BASIS?
I try to forget about myself. If you concentrate less on yourself, you can be inspired. President Obama is changing the idea of personal responsibility as opposed to the idea of ‘I’ or ego. The idea of a group effort or the common good has been unfashionable for a long time.

HOW DOES WHAT YOU DO RELATE TO BEAUTY?
Hats beautify people. People often wear hats to have a good time, if they’re relaxed and when they’re happy. It pulls them out of themselves. Hats can make somebody feel beautiful.

HOW DO YOU DEFINE CREATIVITY? HOW DO YOU CHANNEL YOUR CREATIVITY?
Creativity is quite simple. It’s just a form of expression. Creativity is being able to express something often through a physical thing. If creativity is too studied, it loses its freshness or innocence and soul.

HOW WOULD YOU DEFINE YOUR STYLE?
It needs to excite the person wearing it. It needs to be fun and hopefully have an elegant humor.

WHAT’S YOUR MOST MEMORABLE CREATION?
Making hats for the Princess of Wales was an exciting time for me. Also, the 2004 Christian Dior spring Haute Couture Egyptian collection was an amazing time. It was a nightmare technically, as [the hats] were incredibly difficult to do.

WHAT’S YOUR FAVORITE FASHION SHOW EVER AND WHY?
The Galliano fall/winter show in 1994. There were only about 17 looks. It was a pure vision of creativity.

WHAT’S THE BEST BEAUTY TIP YOU’VE LEARNED WHILE ON THE JOB?
I remember asking the research director of Shiseido what was the most important thing in beauty. He said ‘genes.’

ARE YOU HIGH MAINTENANCE OR LOW?
I’m fairly low maintenance. I use Shiseido Men’s moisturizer, which is the exact right balance between oilfree and oily. The only place I’ll have facials is Mario Badescu in New York. All the others seem too therapeutic. Badescu is just straightforward. I love Kiehl’s shaving cream, and I always wear a fragrance. Apart from my own, I wear L’Instant de Guerlain, which is unusual for spring. It strikes a weird balance between very traditional and somehow modern.

DO YOU HAVE A MOTTO?
I don’t have one, but the first hat in the central case of the exhibition has a milliners’ crest, which I invented. It reads Creo Manus ab Britannia, or Handmade in England. I’m all about handmade, and I’m most certainly from England—for better or for worse.

IS THERE ANYONE YOU’D LIKE TO WEAR YOUR HATS?
Elizabeth Taylor. She wore one of the most gorgeous hats in the world in the film The V.I.P.s. She has such a hat face, although she doesn’t really wear them now. And Michelle Obama—she could wear a hat. I don’t think she’s a hat person, but I’d love to meet her one day and have her wear a hat.