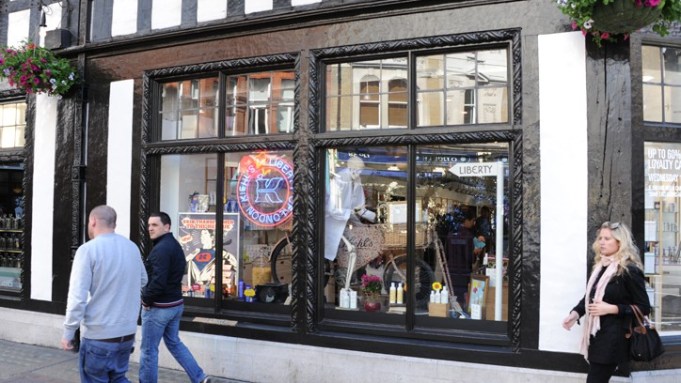 Liberty, the London department store, has given its beauty hall a makeover.

However, in keeping with the store’s 89-year-old Tudor Revival building, the facelift has been a subtle one. The space, which has doubled in size to 5,000 square feet, now boasts arty details, such as colorful Hungarian tiles set into its wooden floors, a hand-painted peacock mural by artist Kerry Lemon on one of the walls and chandeliers made from lamp-shades in Liberty fabric. And thanks to shelving having been cleared away from the windows, the hall is now flooded with natural light.

“The whole trick of Liberty is to look like it was bought with one eye from the top floor to the bottom,” said Ed Burstell, Liberty’s managing director. “You don’t want to walk from one floor to the other and it to be jarring. It has to be seamless, but at the same time [each department] has to be separate.”

The new department has also welcomed a host of new labels into the space. They include niche brands — which Liberty is known for carrying — such as Hourglass Cosmetics, which is exclusive to Liberty in the U.K., alongside Dermalogica, Colbert MD, Sachajuan hair care and Aromatherapy Associates. But, the store has also brought in well-known brands including Trish McEvoy, Decleor, Chantecaille and Bobbi Brown.

Burstell said the criteria for buying a label is that they’re “not overly distributed brands, they’re brands with passion around them and integrity and authority — as we are.”

Gina Ritchie, beauty buyer at Liberty, noted that since she and Burstell began to update the offering in the beauty hall when she joined the company in 2009, she’s focused on brands’ quality. “For example, bringing in Tweezerman. Those we felt were the best tools, so we brought them in,” she said. “We replaced the brand that we inherited with Mason Pearson hairbrushes, so when you come to the department, you can never be disappointed with anything because we have picked the best.”

The store’s eclectic collection of fragrances will remain, housed in its own room, as will its room devoted to Diptyque’s candles. Two fragrance houses, Byredo — which is exclusive to Liberty — and Maison Francis Kurkdjian also have their own counters. Now, the hall carries 35 beauty brands, which include Laura Mercier, Eve Lom and Kiehl’s.

Burstell said that beauty makes up 14 percent of Liberty’s overall sales, compared with the figure of “under 10 percent” that he said it used to represent before he joined the business in 2008. Following the revamp, he expects the area to represent 20 percent of Liberty’s sales and generate between 18 million and 20 million pounds, or between $29 million and $33 million, over the next 18 months, up from the 10 million pounds, or $16 million, it generates now. “I hope that we pick up lots of new customers,” said Ritchie. “We have obviously a lot more to offer because we’re going to be bigger. I think the core Liberty customer [will stay]. People love this store and they shop here for life. [But] the new customer I am fascinated to see.”

And to draw customers in, the store will be holding events with U.K. magazine titles, such as asking Harper’s Bazaar’s U.K. beauty director Newby Hands to advise customers in the store. Meanwhile, a Liberty magazine called Beauty will launch later in June, and over the next six months, the department will also open five treatment rooms, which different brands will be able to use. That adds to a Margaret Dabbs Sole Spa foot care spa, which opened on Liberty’s lower ground floor last year. “We’ll be doing [services] in really different ways than anybody else,” said Ritchie. “It’s about bringing those brands to life.”