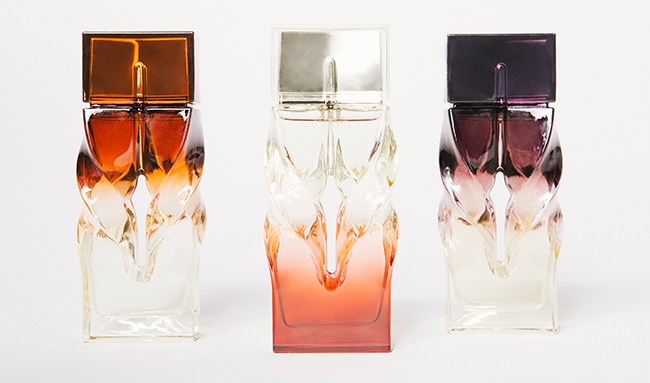 People talk about taking journeys of discovery. But for Christian Louboutin, creating his first collection of fragrances was more like an odyssey.

Working with no brief and no limits — of finance or time — he sniffed submissions, pursued variation after variation of formulas, tweaked and tweaked for nearly three years. A total of 30 perfumers offered 120 competing visions.

In the end, it boiled down to three fragrances, which are being launched today. Distribution numbers about 115 retailers around the world, including 65 Louboutin stores, plus e-commerce.

“Everything that is new that you do is an experience,” Louboutin said. “You need to think on an entire experience. Why would anybody need another fragrance; why would anyone need a new pair of high-heeled pumps in black? It’s not just the object but the entire adventure. You have to think of the journey of that thing on your body because that’s going to live with you and you are going to live through that too,” he said. “It’s an important thing.”

Robin Burns McNeill, chairman of Batallure Beauty — the joint venture co-owner, along with Christian Louboutin SA, of Louboutin’s beauty company — was impressed by the shoe designer’s grasp of perfumery. “He really has a nose,” she said. “When smelling submissions, he would smell blindfolded because he didn’t want to be influenced by anything but his nose. He was very clear and articulate.”

Burns-McNeill, who has worked with some of the best minds in beauty, noted, “He approaches a project like this in such a unique way. He amazes me — his thinking and his logic and who he collaborates with, what inspires him and the extraordinary result.”

He can also be daring. Who else would enter the beauty world through the tiny category of high priced nail polish, brandishing a $50 price point? He did, with his highly reflective nail enamel with its arresting packaging design, which became part of the founding DNA of the luxury beauty house that Louboutin has been building since that launch in 2014. What followed was a $90 lipstick in 2015 that doubled as an objet d’art. This summer, an $85 Loubilaque Lip Lacquer was unveiled. Now, a lot is riding on the  fragrance launch, since it may prove to be the most powerful move yet.

The company does not break out figures, but industry sources estimate that retail sales of the lipstick in the first year approached $20 million. Market sources speculate that the retail target of the three fragrances, with a price point of $275 each, could climb as high as $50 million to $60 million.

What came out of years of lab work was three feminine fragrances, each with a distinct and different personality. Positioning revolves around personal remembrances of vivid emotions and inspiration, rather than on concepts or ingredients stories, as is often the case.

The first scent, Bikini Questa Sera (literally “Bikini Tonight,” in Italian) is designed to capture the moment when a day at the beach turns toward twilight but the sensual feeling of heat lingers. “You had a moment of pleasure and you want to keep it,” Louboutin said, describing the change in light from daylight to dusk as transforming from the dog to the wolf. “The sun has gone, but it is not yet the moon” Louboutin said. “It is a very transformative moment because you go from something very visible, something very warm, domesticated and proper to your wolf. The night allows you to be a little bit wilder.”

The scent has tuberose, jasmine and sandalwood.

The second scent, Tornade Blonde, which does not refer to a blonde woman but a trail of golden light, is meant to evoke feelings of desire. “I was in Portugal and this girl passed very, very quickly so I could hear this type of laugh and I could see her very, very quickly. By the time I looked at her, she had passed already,” Louboutin recalled. The formula has botanical notes of cassis and rhubarb and also rose. It is meant to be floral yet animalistic, with notes of cedarwood and sandalwood.

The third fragrance, Trouble in Heaven, was designed as a scent or provocation. He described the portrait of that fragrance as a woman who “was more often like a Middle Eastern singer. I would say green eyes, white skin and dark hair. It corresponds to a voice, a deeper voice.”

He continued, “It’s a moment where the woman is in charge and she could feel very flirty, but totally in command — or you can be more like a hunter. It’s more the hunter.”

One of the ingredients for Trouble in Heaven that he found intriguing was iris, because there is variety that is double color, purple and yellow. “It is very beautiful, but there is something a little disturbing, dangerous,” he said. Other notes include tonka absolut, patchouli and oriental amber.

Trouble in Heaven and Bikini Questra Sera were created by Pierre Negrin of Firmenich, and Tornade Blonde was done by fellow Firmenich nose Olivier Cresp.

Turning to the bigger picture, Louboutin says he sees fragrance as defining “individuality and intimacy” that can reveal a woman’s inner person. His goal is to allow women to express themselves and “enhance their femininity in a classical way.”

It is so personal, he maintains, that he is always hesitant to give a woman a perfume. “It’s such a strong thing for a woman that it’s almost like asking her to change her personality,” Louboutin said. “I don’t know any woman who would be able — even very much in love — to change her fragrance. It does not exist.”

Burns-McNeill noted that the DNA of these fragrances is a sharp departure from decades past when brands told women what they should feel. “We’re not doing that,” she said. “Everything about the story of these fragrances is a rougher interpretation because Christian feels that women are so different and complex in different times of their lives, different ages; he doesn’t feel he ever should be describing a fragrance that is perfect for this woman [or] that woman.

“You tell the world what inspired you, which is what he is doing, and it’s more for women to discover and make their own decision.”

The fragrances are not only individualistic but potent. The juices have perfume-quality concentrations of 28, 25 and 24 percent. One quality he was looking for was for the fragrances to strike a sharp, definite ping, as in music, that would make notes reverberate, so the scent would linger.

Catherine Roggero-Lovisi, the New York-based general manager of Christian Louboutin Beauté, drew a parallel with Louboutin’s signature red shoe sole. “When a Louboutin woman walks away you have this flash of red that is the memory left behind. For us, the fragrance is a little bit [the same]. It is an image that is frozen in the memory, which is her scent. This is the trace that she leaves behind,” Roggero-Lovisi said.

As an example of Louboutin’s organic, natural way of thinking, he did not seek out a typical packaging designer to make the bottle, but an architect. He chose Thomas Heatherwick from the London-based Heatherwick Studio, who designed the torch in the London Olympics. “(Louboutin and Heatherwick) wanted and objet d’art, they wanted something that was timeless, they wanted something that was respectful of the juice within,” said Roggero-Lovisi, adding that the bottle size is 80 ml., instead of the standard 75 ml., because the proportions looked better in the larger size. Louboutin also wanted a bottle reminiscent of a trophy that a woman could be proud of.

“I wanted to work with an architect,” Louboutin said, “who had never been doing anything around beauty around fashion…to start really virgin.” He also wanted an artisan by nature who could work with organic lines.

The designer said he was taken by the Olympic torch because despite being a large piece of architecture, and very technical, it was “almost like an open flower.”

Louboutin asked him to create a bottle for a fragrance that “you would want to have around you all the time.” He also wanted a design that would allow the juice to circulate like blood and had an image of a ribbon twisted into an infinity symbol.

His final request: “It needed to be feminine, so it couldn’t be square. I needed to see curves. I’m more of a round person, than a square person.”

He got it all.