The designer discussed the development of her debut fragrance at a personal appearance at Barneys New York's Manhattan flagship.

By Pete Born and Taylor Harris on December 11, 2012
View Slideshow 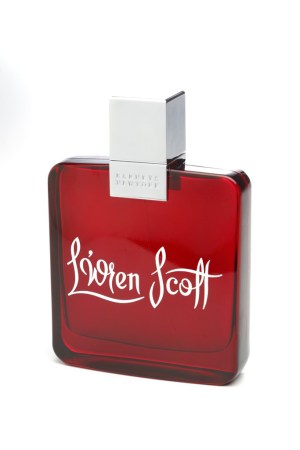 No one will accuse L’Wren Scott of simply slapping her name on a fragrance bottle; she rhapsodizes about scent with the fervor of a maven.

That was evident during an interview Monday in which she discussed the development of her debut fragrance being launched with a personal appearance at Barneys New York’s Manhattan flagship today as an exclusive billed by the store as “the premier of [its] designer fragrance collection.” The scent, called L’Wren Scott, is an eau de parfum priced at $195 for 3.4 oz.

Scott has been mixing her own essential oils since the day in Paris when she was hooked on Guerlain’s Apres l’Ondée at the age of 17. That scent triggered memories of the smells of fresh baguettes, oils in little jars and pressed flowers.

Later she remembers walking down the fragrant alleys of Mumbai, “where you couldn’t imagine smelling anything, but everything was incredible.” Her habit of dabbling with essential oils grew to the point where friends would buy little bottles of her concoctions “out of my purse.”

The memories of these exotic locales helped Scott develop her own olfactive philosophy, much like her fashion sense, which helps customers to develop an attitude and a mood simply by zipping up a dress.

“I play to the sensual and sexy side,” she observed, noting that fragrance can be more personal because it can trigger the wallop of emotional memory.

So when it came time to develop her first fragrance, Scott was ready. “I knew what I wanted,” she said, recalling the reaction at the first planning meeting. “Ralf was quite surprised,” she noted, referring to Ralf Schwieger, the perfumer with whom she worked.

In addition to the nature of the scent — a type of chypre — she demanded a colored bottle, so darkened juice would not show through clear glass, and a white cardboard outer box with bordeaux-colored lettering. The formula is spicy and sensual, opening with top notes of absinthe, star anise, coriander, mandarin and marigold, followed by a heart of tuberose, jasmine, geranium, curry and clove buds. The drydown is comprised of Brazilian patchouli, musk, leather, amber and moss.

While preferring the sensual and sexy, Scott is repelled by the overbearing, such as many of the fragrances of the Eighties. “I don’t think they should wear you, just enhance who you are,”she said.

The germ of her debut fragrance project began two years ago in conversations with Daniella Vitale, chief operating officer and senior executive vice president of Barneys. “[Scott] has been wearing her own bespoke fragrance for years, so it was a natural for her.

“We want to create one [exclusive fragrance] per year and really become collectors pieces,” Vitale said. “We are making very limited quantities and our next project will be a more dual sex collaboration.”

Scott said her scent will be sold exclusively at Barneys for six to eight months, then she expects to start broadening distribution into what is ultimately envisioned as a global business. “I could see doing more,” she replied when asked if she might do other fragrances in the future.

Nor is she ruling out the possibility of color cosmetics, considering that she already collaborated with Lancôme in 2010 on a holiday shade collection that sold out. She also does a range of nail enamel shades every season.

When Scott was developing her fragrance, she had plenty of testing volunteers among her office mates. When asked if her longtime companion, Mick Jagger, offered any advice, Scott replied, “He definitely noticed a lot of perfume testing going on.”

The designer feted her debut later in the evening with a Barneys-thrown dinner at The Carlyle. “I’ve always wanted to go into fragrance,” said Scott, looking sylphlike in a cabernet-colored beaded frock. Flushes of peonies and bottles of her scent, both on tables scattered around the room, were the same hue. “I think people are liking it. I’ve noticed some of the bottles going missing,” the designer said.

Guests — including Mark Lee, Ingrid Sischy and Hope Atherton — dallied around during cocktails, most attempting to keep their cool and not stare at Jagger, who was joined by bandmates Charlie Watts and Ronnie Wood. Others couldn’t help themselves.

“Mick Jagger just stepped on my foot,” one partygoer gushed. “My foot is famous.”

The rocker, clad in skinny jeans, a white oxford shirt, gray blazer and some interesting footwear — navy multicolored striped socks tucked into a pair of Nikes — stuck close to Ryan McGinley by the bar, occasionally exchanging glances with his ladylove across the room. Wood cloistered himself on a corner sofa while fiancée Sally Humphreys happily chatted away with Lisa Perry. Scott squeezed by guests to greet a late-arriving Daphne Guinness, who came lugging a pair of oversize headphones that ostensibly didn’t fit into her clutch. “She’s so tiny,” Annabel Tollman whispered to Scott after Guinness had departed.

Guests sifted out of the cocktail area — Scott had to duck her lengthy frame to enter the dining room courtesy of a low-ceilinged entrance — milling around the long cream-clothed table, atop which sat grand silver candelabras. Yvonne Force Villareal chatted with McGinley, while Jean Pigozzi had some trouble locating his seat. “We have to find our name don’t we?” he muttered, scouring the table for his place card. “I’m shvitzing,” said Jagger, who had already removed his jacket, shortly before becoming the first guest to sit, cueing others to do the same. Soon after, tablemate Perry enlisted husband and Barneys chairman Richard Perry to snap an iPhone shot of herself with Jagger.

After the first course was cleared, host Rachel Feinstein gave her remarks, recalling the first time she met Scott: “It really was love at first sight.” Scott chimed in, “Thank you Rachel for being my hostess with the mostest. I do have very mutual feelings for you but I’ll share those with you later.”

As the meal unfurled — a choice of steak frites or seared striped bass with saffron braised fennel — latecomers Martin Short and Lorne Michaels rolled in; some quick-on-their-feet p.r. gals pulled up two impromptu seats at the end of the table. Short hammed it up for his new dinner mates, while Michaels put in their order. “We’ll just have French fries,” he said. “And wine.”

Scott dropped by shortly after to say hello, eyeing their kiddie meals. “Look at this,” the designer said. “Dinner of champions.”