Her new signature scent, called Truth or Dare by Madonna, is being produced by Coty Prestige and will make its debut March 26 at Macy's.

By Julie Naughton and Pete Born on November 4, 2011
View Slideshow 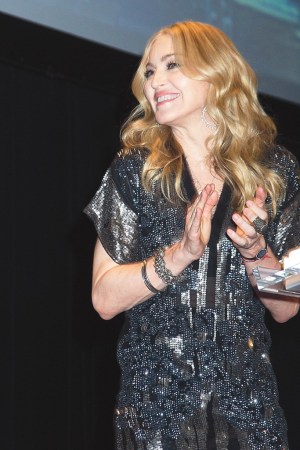 In the cosmos of celebrity marketing, one of the ultimate icons has finally been snared.

A decade after reinventing the Hollywood-driven fragrance category, Coty Inc. has signed a licensing deal with MG Icon to produce a Madonna signature scent. And in an unusually swift show of productivity, the new partners have already created a signature scent for the superstar, called Truth or Dare by Madonna. As WWD reported Thursday, the Coty pact is the first facet of an overall Truth or Dare lifestyle brand. MG Icon is a venture between the Iconix Brand Group Inc., Madonna and Guy Oseary.

The scent is, in the U.S., a Macy’s exclusive and will hit counters March 26. It will roll out to international markets beginning in May, adding up to approximately 20,000 doors worldwide, including the U.K., France, Asia, the Middle East and travel retail.

This confirms a market report that appeared in WWD on Sept. 14.

“I have always been obsessed by fragrance and for years wanted to create something personal that was an expression of me, but that other people could relate to as well,” Madonna told WWD on Thursday. “Something classical and timeless and yet modern. My oldest memory of my mother is her perfume. I carry it with me everywhere.

“She always smelled like gardenias and tuberose, an intoxicating mixture [that was] feminine and mysterious. I wanted to re-create this scent, but with something fresh and new about it as well. Something honest and yet daring — hence the name Truth or Dare.”

The Truth or Dare brand also takes its name from the 1991 documentary film of the same name, which chronicled Madonna’s life during her 1990 Blond Ambition World Tour.

“Over the past several years, I have been approached countless times to create my own brand,” Madonna told WWD on Wednesday, noting that she and daughter Lourdes Leon work with Iconix on the Material Girl lifestyle brand. “The timing is right and I have found great partners in Iconix, who can help translate my vision to reality.”

“She was always on my list,” admitted Bernd Beetz, Coty’s chief executive officer, who touched off the revival of the celebrity category in 2002 with the launch of Jennifer Lopez’s Glow by JLO. And Catherine Walsh, senior vice president of American brands, added, “It’s been a long time coming. How many rumors have there been?”

Both steadfastly refused to discuss the terms of the deal — except to say it is a standard licensing contract with royalties — or projected sales, although industry sources estimated that Truth or Dare could do about $60 million at retail globally from April through December 2012. About 35 percent of that figure is expected to be done within the U.S.

“There’s nobody bigger than Madonna, and she’s waited this long to do it, so we couldn’t be happier,” said Walsh, who said the scent is intended to be a signature scent for Madonna. “Truth or Dare is, and will become, a category. This is her fragrance. She has created this fragrance.”

Walsh emphasized that the superstar was deeply involved in every phase of the development, from fragrance direction to even merchandise fixturing in the stores and even the choice of gift-with-purchase. “She wanted to make sure the statement was the right statement,” Walsh said.

Beetz added that the development process involves bringing out the brand’s substance and Madonna certainly has it. “It’s great to be involved with someone of such substance,” he said.

Emily Bond, vice president of global marketing for celebrity fragrances at Coty Prestige, noted that preliminary talks between the pop star and Coty began this past spring, and that the company began preliminary product development before the deal was signed. Added Walsh: “We jumped and ran very quickly.”

Madonna worked with Givaudan’s Stephen Nilsen to create the white floral with a signature gourmand underneath — “that too is a fragrance which is light and dark at the same time,” said Bond. “Its lightness is in the floral top piece, and the darkness comes in with the background with the gourmand. We captured this duality.” The scent has top notes of gardenia, creamy tuberose and dewy neroli; a heart of carnal jasmine, benzoin tears and white lily petals, and a drydown of vanilla absolute, caramelized amber and sensual musk aura.

Madonna said, “We can be tricked by what we see and hear but not by what we smell. There is something primal and mystical about the sense of smell. It connects us to memory, nostalgia and the ability to dream and fantasize.”

As for the bottle, “Madonna really wanted it to be elevated, and we really believe the point of difference for this celebrity brand is that isn’t a celebrity brand. It’s an elevated brand around an icon,” said Bond.

The customer target for Truth or Dare is markedly different from the fast-fashion, junior-oriented Material Girl, which doesn’t have a fine fragrance. It is aimed at women from 25 to 45, “and our primary [target] is from 35 to 45,” said Bond, who said that a robust digital campaign will allow the company to cross-promote the fragrance with upcoming Madonna activities, including the new studio album she is said to be preparing for a 2012 release. She is said to be planning a tour around the new release.

Madonna will be featured in a global print, television, online and outdoor marketing campaign for Truth or Dare produced in collaboration with Fabien Baron of Baron & Baron, who directed “Sex,” her 1992 pictorial essay on sexuality. Mert Alas and Marcus Piggott shot the print ads. TV has not yet been filmed.

Baron also designed the gold logo for the fragrance, which consists of an M with a cross sitting on top of it. “The design of the bottle is meant to feel luxurious and iconic,” said Baron. “In Truth or Dare, there is naughty and nice. The white of the bottle and M symbol are links to truth, purity and spirituality, while the beading detail, which adds a tactile feeling, taps into the dare side and gives the bottle a raw edginess.”

After nearly 10 years of dozens of celebrity launches and almost as many dire predictions of the category’s demise, the business seems to be maintaining momentum, although with fewer — but much bigger — introductions. “This is a great category,” said Beetz, who pointed to next year’s introductions of not only the Madonna scent but also that of Lady Gaga.

“You have to follow the zeitgeist,” he said. “We have to be close to the consumer. It’s really working.”

He added, “It’s going to be one of the biggest events in the celebrity area.”