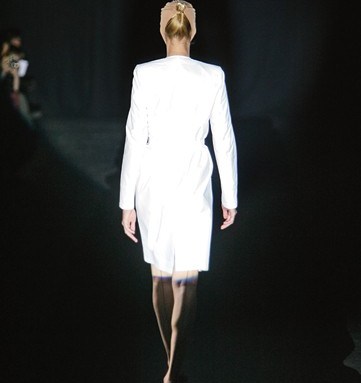 Given its Greta Garbo-like founding designer, Maison Martin Margiela’s first perfume, to be unveiled in Paris in October, is a subject of great curiosity and mystery, sure to prompt L’Oréal to take some new steps — clad in Margiela’s signature cleft-toed boots, perhaps? — in designer fragrance marketing.

“We are trying to do a real Margiela project,” says Giovanni Pungetti, Margiela’s chief executive officer, dressed in a rough-hewn leather jacket, faded jeans and white, vintage-looking sneakers that are among the Belgian designer’s signatures. For example, while there will surely be advertising — a first foray for the 20-year-old brand, Pungetti assures, “We won’t have a billboard in Times Square or Piccadilly Circus.”

Nor will the scent be based on patchouli, an earthy and heavy fragrance that has been wafting through Margiela’s unconventional, all-white boutiques since the mid-Nineties. “It would be too obvious,” he sniffs. The executive declines to give many details, but says the fragrance, an eau de toilette for women, is “not something in line with trends, which is very Margiela.” Indeed, the brand’s quirky and clever fashions range from vintage to futuristic, from rustic to synthetic, suggesting the fragrance could come from anywhere left field — albeit not too far. Fabien Baron, a close ally of L’Oréal, designed the bottle, in concert with Margiela’s creative team.

“We want it to be a very selective project, even if the business plan is ambitious,” Pungetti says. “Of course, we can’t do something too extreme.”

At the time of the interview, L’Oréal and Margiela were still defining the promotional effort behind the scent, due on counters in February or March, recognizing that traditional approaches wouldn’t work for a brand whose fashion-show invitation last season resembled a scratch-and-win lottery ticket, and whose idea of a holiday present ranges from all-white dice to a wishbone, painted white.

Next up will be a men’s fragrance, possibly as early as 2011, depending on market conditions and reaction to the women’s scent.

Margiela’s fashion business, controlled by Italian industrialist Renzo Rosso since 2002, has been on a strong growth track, having expanded its retail network and introduced an array of new product lines, from leather goods and eyewear to fine jewelry and men’s suits. Last year, revenues rose around 20 percent to 70 million euros, or $103 million at average exchange.

The house’s elusive founder and creative director recently reduced his day-to-day involvement in the business, but remains closely involved in the fragrance project, Pungetti says.

Pungetti credited the late Patricia Turck-Paquelier, international brand president of L’Oréal’s Prestige & Collection International division, for spearheading the project and articulating the brand essence within the conglomerate. “We are challenged to do something never done before,” she told WWD at the time the deal was struck. “The DNA of Martin Margiela is intimate and personal.

“The best tribute we could give to her is to be successful,” Pungetti says.

To be sure, the fragrance will bring an off-the-mainstream brand to the attention of a wider public. “There’s a lot of intelligent people in the world who don’t know us yet,” he says. “I love the idea of opening this little door.”