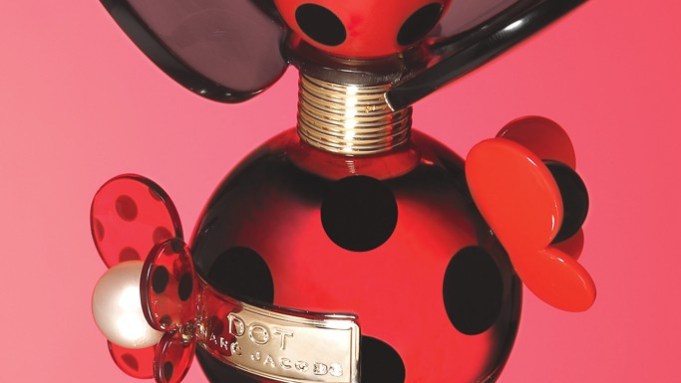 Marc Jacobs has built a fragrance empire by focusing on what he calls “his girls” — Daisy, launched in 2007, and Lola, which bowed in 2009.

Move over, ladies: There’s a new upstart in town, and her name is Dot. According to her creator, she’s charming, spirited and energetic and driven by a fanciful red bottle.

“We keep calling them sisters. Lola is Daisy’s sister, and now Dot is their sister,” said Jacobs, speaking with WWD during an interview in his SoHo studio earlier this week. “There’s beginning to be a sort of vocabulary [within the fragrance collection]; even within the variety, there’s a similar handwriting — something that just feels like us.”

Dot’s fanciful red bottle, which resembles a ladybug with butterflies alighting on it, “just seemed right to me,” said Jacobs. “I asked myself, What would this Dot be? And for me, it would be something that was chic, something that was charming. A dot is timeless and a pattern I always love, and round shapes are always beautiful. I liked the idea of these hybrid butterfly-ladybugs, which suggest a sort of free spirit and femininity and playfulness. And, of course, ladybugs mean good luck.” As well, Jacobs said he has long felt strongly about the classicism and elegance of a polka-dot motif, a recurring pattern in his collections and a major focus of his fall 2011 ready-to-wear line. “One design that I always go back to in some way is the dot,” he said. “I felt like this was something I’d never get tired of, and I’ll always find a new way to interpret.”

He’s practical enough to have flankers (stepsisters?) in mind, too: “I felt this bottle would open itself up to many, many permutations and we can have a lot of fun with it. The visual is always very important.”

Jacobs wanted the scent, which he created with Firmenich’s Annie Buzantian and consultant Ann Gottlieb, “to feel like it was coming out of this bottle,” he said, noting that the juice was intended to be, like the bottle, charming and spirited. It has top notes of red berries, dragon fruit and honeysuckle; a heart of jasmine, coconut water and orange blossom and a drydown of vanilla, driftwood and musk. “There’s a juicy, lush quality to it because it felt like the right spirit for this bottle,” he said. “It’s almost like a butterfly or a ladybug landing on a leaf.”

In the U.S., Dot will be carried at about 3,300 department and specialty store doors beginning in July, and it will also launch in the U.K. in July. The remainder of global markets will get the scent beginning in August, said Lori Singer, group vice president of global marketing for Coty Prestige.

Print advertising, featuring Codie Young and shot by Juergen Teller, will break in September fashion, beauty and lifestyle magazines, noted Claire Fermont Langlais, senior marketing director for Marc Jacobs fragrances. Shot in the Maldives, the image is of a wide-eyed Young in a field of lush greenery. “It’s suggestive of a young, contemporary spirit which is still open to interpretation by the person who would buy it,” said Jacobs.

As first revealed by WWD earlier this week, Jacobs is also working with Sephora to do a color cosmetics collection with a yet-to-be-determined launch date. “Sephora has such a modern sensibility,” said Jacobs, adding that the retailer’s approach to making a luxury product that is appealing to a young and contemporary market is a match with his own philosophy. “It was an inspiring first meeting, and that gets me excited — when their enthusiasm matches my own.”

Jacobs said he sees his endeavors as “another opportunity for design; it’s another opportunity to make a series of choices and to project a spirit,” said Jacobs. “But it will be women out there who decide if it’s good or not. I just put all my heart and soul and all my energy into basically everything that I work on, and I always feel that the product has integrity because there is that energy and passion in it. I’m not a perfectionist — I don’t think we ever get anything perfect. But I do believe, within the time we have to do something, that we get things as best as we possibly can, and by the time I’m ready to let them go I’m really proud of what it is that we’re putting out there.”

The designer noted that he’s not yet done building his fragrance empire with Coty, welcome news to Singer, who noted that Jacobs’ stable of fragrances grew 37 percent in the U.S. in 2011 alone. But give Jacobs a breather first.

“For now, my head is in my next [rtw] collection, and the wonderful and colorful world of cosmetics,” he said. Any previews of the rtw collection? Jacobs laughed. “I never know what it’s going to be until the first girl’s on the runway,” he deadpanned. “It changes up until the last minute. It’s a process, not a recipe. It starts somewhere and ends up somewhere else.”