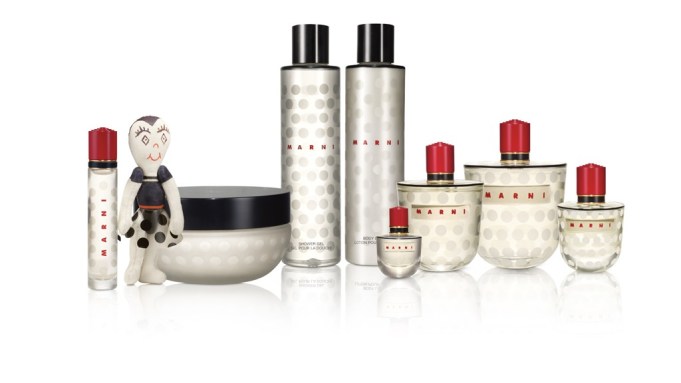 Marni and its licensing partner, the Aramis and Designer Fragrances division of the Estée Lauder Cos. Inc., are preparing to launch the Italian fashion house’s first women’s fragrance in February. It has clearly been designed to appeal to a Marni consumer craving innovation.

“The perfume reflects Marni’s fashion, certainly,” said Consuelo Castiglioni, Marni’s creative director. “Because it’s a perfume that’s quite individual, that doesn’t evoke anything in particular. It’s for a woman who dresses for herself, who doesn’t follow trends but is sophisticated and also maybe a little eccentric.” That individuality also applies to the design of the flacon, which was inspired by an old bottle that Castiglioni discovered in a flea market 20 years ago. The shape of the bottle is a sharply different silhouette than is usually found in most fragrance flacons, more like a fashion design. “I wanted a bottle that was kind of traditional, that is, one that lasts over time, like the clothes we make, which last and you can still wear two or three years from now. It isn’t seasonal. I think this bottle reflects our concept — you want to keep it. It also has the dots, which are part of our world, and a play on proportions with the cap. These elements are also important in our fashion.”

Veronique Gabai-Pinsky, global brand president of Aramis and Designer Fragrances, BeautyBank and Idea Bank at Estée Lauder, said, “Marni is all about a very discrete confidence.” She pointed to the design of the fragrance’s outer box, which juxtaposes textured and vinyl surfaces, plus a combination of white and beige with red lettering.

To prepare for developing this product, Lauder conducted a consumer survey that revealed that the one thing users of designer fragrances want is innovation in the fragrance’s juice. To satisfy that desire, Castiglioni suggested a fragrance she had worked on years before as a fashion project with Givaudan perfumer Daniela Amdrier, which was unusual in that it eschewed the staples of most commercial scents — floral and fruity notes. It was a blend of spicy and woody notes, which Gabai-Pinsky praised but thought was a bit raw. Lauder added a dark, intense rose oil to inject voluptuousness. That effect was moderated with incense. “It’s very modern and bold,” Gabai-Pinsky said.

Marni’s design aesthetic dovetails with Lauder’s strategy of putting together a stable of designer fragrance brands — Donna Karan, Michael Kors, Ermenegildo Zegna, Tory Burch, Tommy Hilfiger and Coach — that “represent a higher-end proposition with an aspirational value.” She added, “We want to build scale for the long term.” Her aim is the sweet spot in the market, fragrances of 100 ml. that cost more than $100. That segment represents only 5 to 7 percent of the global business, but the category has shown the strongest growth over the last few years. The fragrance’s price points are true to this strategy. A 65-ml. eau de parfum will retail for $105 and a 120-ml. size will be priced $155. A 30-ml. size is being contemplated for later. One of the most eye-catching features of the line is the $50 purse spray, which comes with a fabric “Huggy” doll. The line is rounded out with 200-ml. body lotion, shower gel and body cream, also a deo-fragrance.

Gabai-Pinsky said her goal is to establish the brand with a new proposition of high-end design and take the time to connect with customers to establish a “very fruitful long-term relationship with every consumer.” Gabai-Pinsky declared that she is not interested in wide distribution, but rather a high level of sales with a very focused door count. The launch will involve only about 2,000 doors around the world in a universe of about 25,000, or 10 percent of the total. In the U.S., Saks Fifth Avenue will have a six-month exclusive and in other markets, retailers — department stores and perfumeries — will enjoy exclusives or very select arrangements, often consisting of flagships. The purpose is to provide more space and service than is usually given a fragrance on launch.

The battery of promotional weapons includes devices such as sampling and direct mailers, designed to reach out to consumers. The print ad, featuring model Raquel Zimmermann and photographed by Nick Knight, will appear in one magazine title, the global editions of Vogue around the world. That is another example of the intense focus of this project. Gabai-Pinsky did not break out figures, but industry sources estimate that the first year sales target for the launch is $25 million at retail, a figure that is expected to climb $50 million to $75 million within three years.