The multitalented Mary J. Blige on self-acceptanceand the personal journey that inspires her Grammy-winning music, philanthropic efforts and new scent.

By Julie Naughton and Pete Born on June 18, 2010
View Slideshow 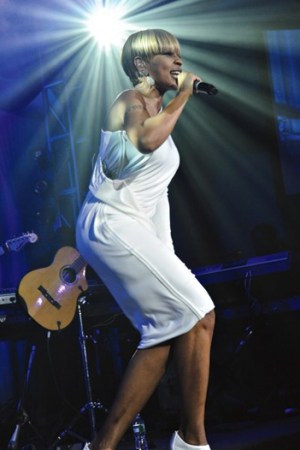 Nine-time Grammy Award winner Mary J. Blige is as devoted to her fans as they are to her. To empower disadvantaged women, she created FFAWN, the Foundation for the Advancement of Women Now; to foster the next generation, she mentors students at the Women’s Academy of Excellence in the Bronx. Her latest project? My Life, a signature scent named after her 1994 breakthrough album of the same name. Here, the superstar on beauty, confidence and branching out.

How do you define beauty?
Beauty is you not being afraid of who you are. Whatever that is, that other people are not satisfi ed with, as long as you’re satisfi ed with it, you’re going to cut through as beautiful to everyone. Because that means from the inside, you accept [yourself ]. To me, I look like, uh. But if I accept it from the inside, I look like, wow! On a regular day, I’m like, “You look OK.” With the makeup and hair and all that, I’m like “You look good!”

So you are attracted to the makeup part?
The makeup is the fun part because it’s a beautiful asset to who you are already. You’ve just got to be able to accept who you are, know who you are, and makeup will be the cherry on the cake. And that’s beauty to me. Selfacceptance. Inner beauty is gorgeous. The makeup and the clothes are great, but mean nothing if you can’t accept what you see at home. I forget it sometimes, but I need to keep saying it and remind myself that’s how I feel.

What does my life represent to you?
The name My Life comes from me wanting people to see what was going on in my life. During the time I was building my fan base, I was crying out for help, because I was going through so much. Turns out they were crying out for help, because they were going through so much, too. Four million women said, “Mary, we’re going through it, too, but you’re helping us by calling on us.” And they helped me. So I wanted [the fragrance] to be something special for my female fans. It’s a special tribute to us as women, and who we are and how far we’ve come. My fans and I are smart now. We know we’re smart now, but we didn’t know it then. We know we’re beautiful now—we didn’t know it then. We’re educated now—we didn’t know it then. We’re soft, we’re edgy, we’re all those things. And I wanted this perfume to represent every female’s everyday life.

What was the fragrance creation process like for you?
It was new to me. I’ve never done it, but it was so much fun because I have a keen sense of smell. I knew exactly what I wanted and would ask for an incense smell, a musk smell, a wood smell. I also wanted fl orals, but edgy fl orals. Every day they would bring me blotters to test. After a while, everything started to smell the same, so I had to pull back. I took the perfume, and tried it on myself around Christmas. My aunt Pam [Pamela Baxter, chief executive offi cer of LVMH Perfumes and Cosmetics] came to our house, and I said, “Pam, I love it, but something’s causing me to hate it. What is that smell—there’s too much of it?” Pam said it was wood. I got on the phone right away and said, “Take the wood out!”

Why was it important to you to be involved in the development process?
In 1994, I wouldn’t have known what was in it because it wouldn’t have been in my mind to pay attention. Since I’ve evolved and changed my life, I pay attention to everything. I don’t dig and pry—that’s not what I do. I’m not a nosy person. But the things that are for me to learn, I learn them. I have to be involved. When your name is attached to something, and it’s not good, that’s your name. So I prefer a good name rather than vanity and riches.

Are you shy?
I am shy. That’s why I like to make sure I’m prepared. If I’m stumbling and fumbling and stuttering and not knowing what I’m speaking about, it bothers me later. Being prepared gives me the confi dence that will cut through the cameras. This [project] is something new—people have never seen me in this light, as an entrepreneur. My ambition is to constantly let people see me in another light—to see me as a philanthropist with the [Foundation for the Advancement of Women Now], to see me as a businesswoman and entrepreneur with Carol’s Daughter.

Why is FFAWN so important to you?
I was a victim of abuse; my mom was a victim of abuse. Every woman in my neighborhood when I was growing up was a victim of physical abuse. All my life, as a child, I saw women screaming at the tops of their lungs, women running out of their houses naked trying to get away from their husbands. I almost didn’t want to give myself a second chance, but I did. I vowed as a child—when I saw my mom and all those women being hit—I refuse to see another woman hurt like that. I can’t do it. I see their self-esteem go down, they just don’t care anymore, they look horrible, and I’m in the music business—I have to do something about it.

What services does FFAWN provide?
We go to work saving lives and giving women a second chance. We opened the Mary J. Blige Center for Women in Yonkers [N.Y.], where I saw all that [abuse]. We have a GED class. We have a childcare system, because the hardest part of being a mother and trying to get a job was trying to fi nd a babysitter, when my mom was raising us. We have a computer room where you can get your résumés together and go online and see what’s out there. I want them to have confidence. I learned that confidence really could save a life.

Have you ever thought of going into fashion?
Yes, but I don’t want to do clothing just because everyone else is doing it. I want to do it right. I’ve had meetings and stuff like that. But I don’t think everybody’s goal is my goal. The goal is to make sure that people are comfortable and fl y. What good is your beautiful dress if you’re not comfortable in it? I believe in comfort. Your shoes have to be comfortable or else you’re not going to be able to think. This is a woman’s thing.

You recently did a cover of Led Zeppelin’s “stairway to heaven.” are there other songs you’d like to cover?
There are so many songs I’d like to make over, and so many songs I would never, ever touch—ever! Not in a negative way, but some things you can’t do, or you shouldn’t do. Certain things are best left as the classic that they are.