It shouldn't be easy to follow in the footsteps of No.5. But in 33 years at Chanel, master perfumer Jacques Polge seems not to have broken a sweat.

By Alexandra Marshall on May 20, 2011
View Slideshow 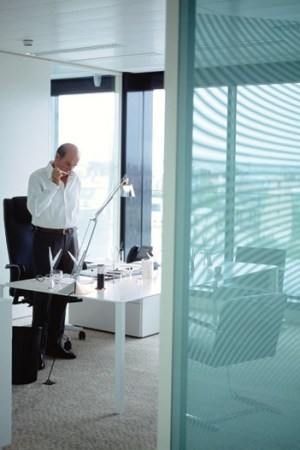 Jacques Polge, master perfumer at Chanel, is rare among leading noses, both for his longevity and track record. Upon arriving at the house in 1978, he was only the third perfumer in Chanel’s history. A few years later, he produced Coco, which has since become iconic, and he’s followed with a string of other successes like Allure, Coco Mademoiselle, the Les Exclusifs range, and last year’s Bleu, which should keep the house in top-five sales seemingly for eternity. Perched on the highest floor of the company’s headquarters in Neuilly, where he rules an in-house lab— one of the few left in perfumery that both creates and manufactures—Polge shares his view from the top.

How have you seen the business evolve since you joined Chanel in 1978?
Unfortunately, I’d say perfumes have become trivialized today. There are too many! It’s become so easy, everyone is launching one. But they’re also trivialized where they’re sold, or when you open a magazine now, it’s full of perfumes. We try to fight against that here, but we’re also directed by the waves of the market. That’s just how it is. Also, now we only speak of global perfumes. There used to be an American perfumery that had different criteria than in France. Traditionally in France, good taste meant having some discretion. In America, and I’m speaking in broad strokes here, the idea was more that perfume was something expensive, and so you should really smell it. Today, brands have replaced national traditions, and brands do their fragrances for the whole world.

Has your creative process changed a lot?
I’m not sure it’s changed, but I know more now about Chanel and where I think we’re going than when I joined. It’s something I feel much better about than I used to. Our creative strategy is always to look within the roots of the company, and when I started, the only fragrance we were really selling was No.5. Now we have Coco and Coco Mademoiselle and others, too, so that’s great. But here, every new fragrance has to be different, and occupy a space where there is no fragrance. So the process is always new. And we’re constantly trying to find better and newer raw materials, ones that only we have.

What was the last new ingredient that blew your mind?
We’ve found some new musks that are very interesting, and we are working a lot at the moment on iris, which is a very important ingredient in No.19 Poudré. We have our plantations in Grasse, with rose and jasmine, and we’re trying to find new qualities in those. But we’re also trying to reproduce what was done 40 years ago, that nobody does anymore. Iris, for instance, is a very special product. It has a long processing time. You plant it. Then you remove the roots and dry them for three years to augment the irone, or the scent principle. Then you put it through some other processes so that only the purest part remains. No one does that anymore, because no one has the time. Sourcing iris is also difficult. So much of it comes from China now and it has a different scent. In this way, it’s not that we’re always doing totally new things, we’re also maintaining the artisanal side, and doing what no one does anymore. That combination gives us a result that no one else has.

And with your lab, you have greater control. You are somewhat unique in that, no?
Though Monsieur Beaux created No.5 in 1921, the company has had a fragrance arm since 1925. Since then, Chanel has always created its own products. In that sense it’s unique. There are other companies now that have their own labs, like Dior, and Hermès. Then there are others who closed theirs, like Lanvin. Guerlain has their own, but they haven’t made every single scent there. We buy products from firms like IFF and Firmenich, too, of course. There are lots of ways of working. But I can say we’re the only company that has both had its own lab and made all its own scents since the beginning.

What’s a perfumery trend you don’t love?
Those fragrances they call “marine scents.” I’ve never liked those. They discover two ingredients that people say smell like the sea, but to me, the sea never smelled like that! “Trend” is a difficult word. We don’t want to follow trends as much as create them, but it’s true that perfumes are very allied to fashion and fashion dictates trends. We had minimalist fashion at the same time that perfume started to return to very pure florals like L’Eau d’Issey and Estée Lauder’s Pleasures. Perfumes do follow fashion.

Even if they’re supposed to stay relevant for much longer?
Absolutely. The complicated part for us is we have so much to choose from. Monsieur Lagerfeld does six collections a year and we create a totally new perfume, not a variation, maybe once every 10 years.

Speaking of trends, you have avoided unisex entirely.
I find unisex interesting, but it’s true, it’s not a direction that we have taken. That said, there’s been a considerable evolution of what we call feminine scents and masculine scents. None of that is as simple as it used to be. How much masculinity do we put in a feminine fragrance, and vice versa? That changes. Sycomore, one of the Les Exclusifs, has lots of vetiver, and vetiver has usually been considered a masculine scent. Though it was conceived as a women’s fragrance, a lot of men are wearing it, too. If I had wanted to make it for men, I’d have done it slightly differently, but I’m pleased as long as people like it!

Do you believe in mentors?
When I was young, there were older perfumers and professors who impressed me a lot, but I wonder if it’s possible to have a mentor, really, in this métier. There’s no nose that resembles another. I’d say we have affinities for each other. It’s a small world. Then again, my son now works for IFF, developing fragrances for other fashion houses, and I have helped others start, as well. If I find someone I think seems intelligent, I’ll push them to do fragrance. Someone who works well, works well. I don’t want to make a comparison that sounds pretentious, but Pablo Picasso would have been a success at whatever he did. He could surely have been a great banker.

How do you know when a scent is finally finished and ready to be released?

It’s never finished. Sure, at one point you have to stop, but if they let me…let’s just say I can easily imagine a perfumer working on the same fragrance his whole life, like the painter Pierre Bonnard, whom they caught at the museum trying to retouch his canvasses. In another sense, perfume is never done because we manufacture our catalogue constantly, and we use a lot of natural ingredients, so we also have to control a lot for consistency. And then if we find a new raw material that complements something we already have, maybe we’ll do a variation. In that sense, a finished perfume isn’t ever really “finished” either. We had Coco and then 10 years later, Coco Mademoiselle.

What’s your favorite fragrance not created by you?
I will never denigrate my confreres, but I’m not going to advertise them, either! That said, we all love the first perfumes made by the great houses, like Guerlain or Coty, because that’s the beginning of it all. There’s a type of conversation that happens in perfumery. When Coty did Chypre de Coty, Guerlain did Mitsouko. If we try to name all the fragrances with a relation to Shalimar, we’d be in the hundreds. I will say there’s a perfume by Schiaparelli that’s now gone called Shocking. I worked for the company that made it before I was at Chanel and it still interests me. It has a lot of patchouli and every time I work with patchouli, I think of it.

What about favorites among your own?
I’d say Allure for women, because it’s very simple and when I smell it on a woman it’s very pleasant. It has great potential, though unfortunately, I’m not criticizing, but the company doesn’t push it compared to others. You can’t push them all. I’m also very fond of Égoïste. It’s a perfume for men like no other because of that accord between spice and sandalwood. It was derived from Chanel’s Bois des Îles, a women’s scent, and it wasn’t a big success, but I think people remember it.

Do you have to protect your nose? If you have a cold, do you not show up for work?
No, I’m here! I take no precautions. When we’re sick, of course, we’re handicapped, but oddly there are some things you smell then that you don’t when you’re well. With a little experience, a perfume formula is something you can read, too, like a musician can read music. Also, I don’t take precautions because though I might propose perfumes, it’s everyone else who judges them and makes them a success. You have to guard against becoming too specialized.

You studied poetry. Do you see a connection in that to what you do now?
Perfume is a poetic form. It’s a language that uses neither words nor images, and yet it’s one everyone can speak in their own way. [Jean] Cocteau said, “I sculpt the invisible,” and that’s an idea that works for me, too.

What do you do to relax?
Nothing at all! Relaxing is important.

How do you work within the pressure of a massive enterprise and stay creatively free?
You’d better stay free! You know for me, ultimately I don’t see an opposition between commercial and noncommercial. Good perfumes are perfumes that sell. I have no problem with that. But at the same time, you have to start with a perfume you love. Even if no one else does, at least you do!

What’s something a perfumer should never be?
Sure of himself.

Why?
Being sure of yourself and doing creative work is a fatal combination. You always have to doubt.

Though he studied literature and English in Aix-en-Provence, not far from where he grew up, Jacques Polge turned away from academia to study at the Roure perfumery school under Marcel Carles. He moved to New York three years later, to work for Roure-Bertrand-Dupont (the company that would become Givaudan.) Two years later, in 1978, he became the head perfumer at Chanel. Since then, he has created 26 fragrances, with two more out this fall: a women’s scent for the limited edition Les Exclusifs range called Jersey, in honor of one of Coco Chanel’s favorite fabrics, and No.19 Poudré, a rethinking of the original No.19, with added notes of iris.