He and his daughter Anaïs have developed a niche perfume line, called Akro.

PARIS — How can the notion of addiction be morphed into fragrance? Firmenich master perfumer Olivier Cresp and his daughter Anaïs met the challenge, with the creation of their line of scents, called Akro.

The moniker is a riff on the French word for addict, “accro.”

“We noticed especially…the young generation of people around 30 years old is going out at night and trying quite a lot of things, such as weed, cigarettes, whiskey or beer,” said Cresp, who has been the creator of blockbuster perfumes such as Thierry Mugler’s Angel, Paco Rabanne’s Black XS and Nina Ricci’s Nina. “So [Anaïs] said: ‘Would you be able to work on addictions?’

“I said: ‘Well, not all the addictions, of course,’” explained Cresp. “But most of them. It took me over two years to realize the fragrances. The jury I had in front of me was tough,” he said, referring to his family, adding: “I didn’t want them to be disappointed.”

Anaïs Cresp, an architect and designer, insisted that there be six perfumes for the launch. Each is genderless.

“When she was working and living in London, she said: ‘I want something underground, a bit black, rock ‘n’ roll,’” explained Olivier Cresp. “That was the main starting point.”

Olfactively, it was a cup of joe. “Everyone in the world has coffee five, six, 10 times a day,” he said.

So the scent Awake was born. It includes notes of Santos coffee, green cardamom, Italian lemon and Haitian vetiver. 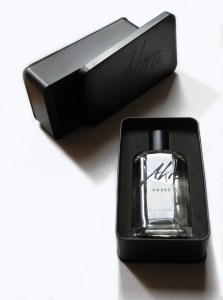 “[There’s] addiction to alcohol. I could have worked on gin, but I prefer to work on whiskey because you have more facets to evoke,” said Cresp. The result was Malt, with whiskey, rum, leather, seaweed and patchouli notes.

“Then I’ve been working on black, dark chocolate,” he said. Fittingly, Dark became the name of the perfume, with cocoa, dark chocolate, cinnamon, hazelnut and vanilla notes.

The Night perfume — with notes of Bulgarian rose, cumin, saffron and agar oud — is based on sensual and sexual moments nighttime can bring.

Akro, with a 100-ml. eau de parfum bottle retailing for $160 and 2-ml. versions also available, began selling in late 2018 online in France and the Jovoy boutique in Paris. It then rolled out to a few locations in Belgium, Eastern Europe, Saudi Arabia and Italy.

In the U.S., it’s carried at Luckyscent in Los Angeles and online, while next up is a rollout elsewhere in the Middle East, Russia, the U.K. and Asia. The idea is to maintain tight distribution, such as just 100 stores in 10 countries ultimately.

Olivier Cresp has enjoyed the total freedom this project has offered, but it’s come with a fear factor, too. “I’m starting again,” he said. “I am working without a net, which was hard, you know.”