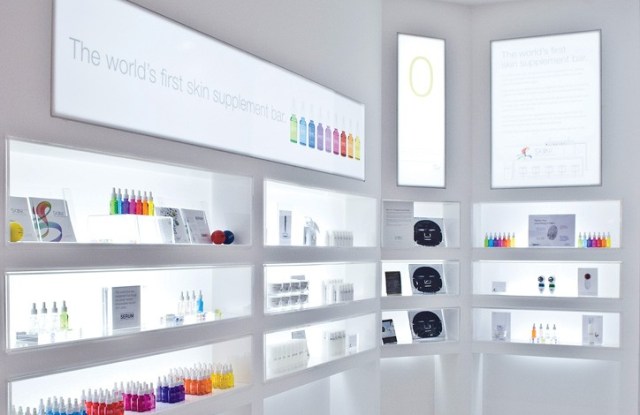 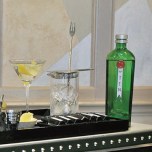 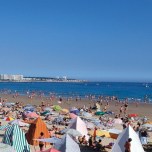 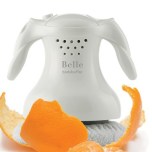 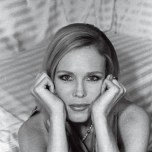 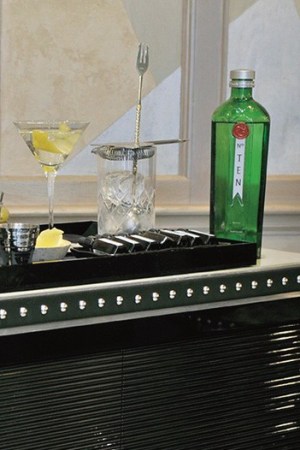 Vividly colored flacons line the sleek white walls of Skin Inc. Supplement Bar, but this establishment doesn’t concoct cosmopolitans and gimlets. Instead, the Singapore-based retailer, started by ex-marketing executive Sabrina Tan, serves up personalized cocktails of skin serums. Working under the tag line of “lose the hype and gain the science,” Tan tapped a Japanese research and development firm to formulate nine fragrance- and paraben-free serums, loaded with seaweed beads encapsulating active ingredients such as collagen, coenzyme Q10 and hyaluronic acid. At the store, customers are given a skin analysis and then are custom-formulated a trio of serums dubbed My Daily Dose for around $143. Decanted into brightly colored vials, the blends aim to treat a myriad of complaints, such as uneven skin tone, sensitivity, acne and aging. Thus far, four Skin Inc. bars have opened in choice Singapore locations—the latest is in the new Ion Orchard luxury retail mall— and the concept went international in April with Bars in Vietnam and Brunei. In-store treatments, such as facial peels and anticellulite therapy, and body products were recently added to the lineup, too.

Next: A unique twist on cocktails at London’s Connaught Bar >>

James Bond famously prefers them shaken, but cocktail connoisseurs in London like their martinis served with a flourish—as well as a fragrant and flavorsome twist. The Connaught Bar, a cozy hot spot in the chic Mayfair hotel, recently introduced a martini trolley, which involves the classic cocktail being whipped up on a mobile Art Deco–style drinks cabinet by a white-gloved mixologist next to guests’ tables. Guests are presented with a selection of seven homemade bitters, which they smell before having them incorporated into their drink. With flavors including lavender, coriander, cardamom, ginger, grapefruit, licorice and vanilla, the bitters could easily be mistaken for a miniature fragrance organ. “We wanted to create a cocktail with a difference,” says Santino Cicciari, the bar’s manager. “With everything you order, there is a ‘wow’ factor.” The martinis, priced from $23 to $46, are stirred in a Japanese crystal jar, which was conceived to conserve freezing temperatures, and are served in engraved crystal glasses—and have quickly become the Connaught’s most popular cocktail.

Next: The ultimate summer job >>

Note to all job seekers: The French seaside town Sables d’Olonne has teamed up with Garnier and is now accepting applications for the ultimate summer job: Sunscreen applier. As part of a promotion called “Operation Creamers,” an ad to recruit young people appeared in the local and national press on April 12. Within five days, the event’s organizers received more than 500 video applications. A town spokesman admitted that a lot of the videos were funny, but said hamming it up isn’t enough to secure the gig, which will pay about $6,735 for six weeks of work. “Candidates need to be very motivated and serious about their mission,” he said, explaining the job entails distributing free Ambre Solaire samples, giving sunrelated advice and rubbing sunscreen onto the backs of vacationers. There should be an ample audience. “People will never do without sun,” said a Garnier spokeswoman. “Sun is the happiness pill.”

Former Vogue cover girl Nancy Donahue is following in the footsteps of model-cum–beauty entrepreneurs such as Iman with a new device she says will eradicate cellulite—once and for all. “When I was modeling in my 20s, I had more cellulite than I do now,” laughs Donahue, now 52, whose modeling heyday was during the late Seventies and early Eighties, when she did “a ton” of editorial for magazines such as Vogue, Harper’s Bazaar and Glamour. After she retired, she moved to Boston, where she became a chef and personal trainer, and today teaches yoga and Pilates. Several years ago, she discovered a massage device for relieving soreness and edema, and discovered it improved the look of dimply skin, too. Based on it, she developed the HoneyBelle Body Buffer, which uses “random orbital oscillation” to stretch and break the dermal bands around fat cells that cause cellulite. It is meant to be used on dry skin twice a day for five to 10 minutes and results are supposed to appear in 30 days or less. Currently, the $395 device is available online; plans call for distribution to expand to upscale spas, salons and specialty stores as early as May or June, with first-year sales expected to reach $7 million.

Beauty and the Beautiful Game

Come June 11, all eyes will be on South Africa, as the 2010 World Cup kicks off. South Africa isn’t just a soccer paradise, however. With a floral kingdom ranked as the third most biodiverse in the world next to Indonesia and Brazil, the country is also a treasure trove of natural ingredients. Rooibos, aloe ferox, marula and fynbos are just some of the plants indigenous to the country that have made their way into beauty formulations. Here, four standout homegrown lines.

Africology
The eco-friendly Africology range is made from 100 percent natural essential oils and plant extracts. Its star ingredient is aloe ferox, which is touted as nature’s answer to Botox and is found only in the Cape region, where it grows in the wild. It is blended with marula and olive oil extracts in Africology’s star product, Aloe Ferox Serum ($30), which claims to instantly lift and plump the skin.

Charlotte Rhys
One of the country’s best known luxury bath and body brands, Charlotte Rhys recently launched an antiaging skin care range to coincide with its 10th anniversary. The Spa Serum ($55) contains a cocktail of antioxidants, cyclodextrin complexes and lyposystem formulations, and claims to work directly on the basal layer of the epidermis, stimulating skin repair, improving elasticity and increasing collagen production.

Theravine
Developed in the heart of the Stellenbosch Winelands, TheraVine fuses science and nature, and draws primarily on the extract of the local Pinotage grape. The line’s star product is UltraVine Rich Collagen Cream ($64), which contains trylagen (a peptide and protein combination) blended with shea butter, sandalwood and lavender.

Environ
Created by local celebrity plastic surgeon Des Fernandes, Environ harnesses the powers of vitamin A to combat aging and the damaging effects of the sun and environment. The Ionzyme C-Quence range combines vitamin A with antioxidants, while the recently launched C-Quence range purports to refine the surface of the skin and reduce uneven skin tone.

Next: A video game for aspiring hair stylists >>

First, the salon world busted onto the reality TV scene. Now, the professional hair care industry is entering virtual reality with a video game that allows aspiring stylists to hone their skills on a Nintendo Wii. Making its debut at last month’s America’s Beauty Show in Chicago was a new video game, “Busy Scissors,” a hairstyling-simulation game published by Little Orbit LLC. The game takes place in a Hollywood salon and a player succeeds by meeting the needs of his or her demanding clientele with the goal of ultimately rising from the position of junior assistant to salon owner by perming, coloring, shampooing, cutting and styling clients’ hair to their liking. The game’s developer, Manifest Oranj, spent months at a Toni & Guy Academy, using the stylists and educators there as a template. Little Orbit also teamed up with Unilever, Tigi’s parent, to feature virtual items from its Bed Head, Tigi Pro and Tigi Colour product lines that are used in the styling of hair throughout the game.