The collection of 11 scents is influenced by Japanese traditions and ceremonies. 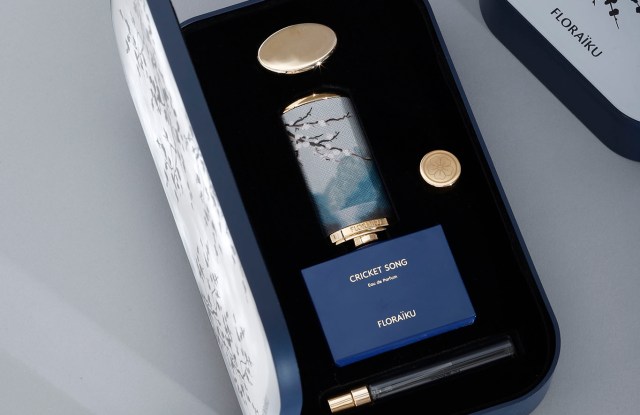 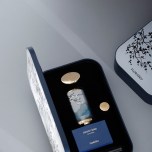 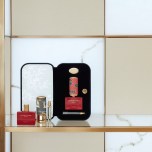 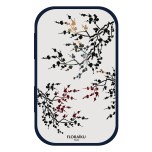 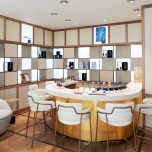 Call it a haiku to fragrance.

This week, Floraïku launched exclusively with 11 fragrances at Harrods in London with a 270-square-foot space in the retailer’s extended Salon de Parfum. Designed by India Mahdavi — who created the Memo Paris flagship in Paris — the space has a wooden floor inspired by Japanese tatami mats, gold leaf wrapping a “ceremony bar,” brass and white leather chairs and white marble and straw panels.

“We found that the names of perfumes are very important, almost as important as the fragrances themselves. Some people might forget that. You have to dream with the name; it has to be something that makes you start to smell,” Clara Molloy said, noting that the brand is influenced by Japanese traditions and ceremonies, although Japanese olfactory references weren’t inspirations for the actual juices (save for cherry blossom and Genmaicha tea notes found in two of the scents).

Alienor Massenet, a senior perfumer at Symrise, created seven of Floraïku’s fragrances — “I See the Clouds Go By,” “Cricket Song,” “First Dream of the Year,” “One Umbrella for Two,” “My Shadow on the Wall,” “Sleeping on the Roof” and “Between Two Trees” — and Sophie Labbé created the remaining four (“I am Coming Home,” “The Moon and I,” “My Love Has the Colour of the Night” and “Sound of a Ricochet”).

The range of eau de parfums are separated into three “ceremonies” — Secret Tea and Spices, Enigmatic Flowers and Forbidden Incense — containing three scents each, as well as two fragrances that Clara Molloy referred to as “Shadows” (“Sleeping on the Roof” and “Between Two Trees” are the Light and Dark Shadows, respectively). Each bottle is emblazoned with a haiku written by Clara Molloy, who took creative license in the writing process.

For example, the fragrance “I am Coming Home” contains a haiku that reads: “Shivering lights far away. Tonight. I am coming home.” The “big rules are there,” Clara Molloy said of the poem, which is printed on three lines just like a traditional haiku, although each line doesn’t contain the seven, five and seven syllables that are supposed to constitute a haiku.

Clara Molloy said Floraïku is a departure from the decade-old Memo Paris range, which has a portfolio of 26 scents.

While there is one parallel between Memo Paris and Floraïku — “I’m there, I am the link. I design both. There must be something about me in both,” Clara Molloy stated — the brands embody something entirely different. With Memo Paris, the baseline was “the destination,” she said, whether this meant someone walking or traveling in a boat or train. The philosophy behind the first brand is a long journey, where every part is interesting in some capacity.

“You shouldn’t go too quickly, but we believe in movement. You get ideas when you walk. Many people will tell you that you’ll get new ideas when you walk; it’s the moment that your brain breathes. New oxygen [forms] by meeting people that are different from you and seeing other places and ways of doing things, of thinking, of religion, of everything…of seeing the unknown and what’s different from you,” Clara Molloy explained.

“It’s finding your place of grace. Somewhere around the world there is a special place waiting for you,” she continued, comparing Floraïku to sitting at the top of a summit where one can sit, contemplate and “see calm. [With Floraïku], you are exactly where you want to be. It’s a sensation of peace and calm.”

Massenet, who was formerly the exclusive perfumer for Memo Paris and created the most recent Eau de Memo, said she transformed the ritual of tea into a scent by creating fragrances that are more “poetic” than ones she’s formulated for Memo Paris. She compared the three scents in the Enigmatic Flowers group to Eau de Memo, which is an intense fragrance with leather and suede notes juxtaposed with a bouquet of fresh citrus notes such as grapefruit, bergamot and orange.

“The idea was to have that leather because leather resembles traveling and the suitcase and all that. Floraïku is more rounded and the smell is simpler, maybe less contrasted,” Massenet said. “But when I say simpler, to make something ‘simply’ in creation is very difficult. All the ingredients need to be extremely well dosed. It’s a different way of formulating.”

Similar to Memo Paris’ price points, Floraïku costs 250 pounds for a bento box containing a 50-ml. bottle of eau de parfum, a 10-ml. travel vial and a canvas wrapped travel atomizer case with brass cap (the travel atomizer case doubles as an oversized cap for the full-size bottle). Refills are 146 pounds for a 50-ml. bottle and a 10-ml. travel vial. Customers are also able to customize their bottles with a metal seal affixed with little Japanese icons, as well as their initials.

Clara Molloy’s attention to detail is meticulous, from packaging to elements of the welcoming ceremony.

Each travel atomizer case is wrapped in treated canvas — which is printed on the same canvas as Louis Vuitton’s accessories. Each scent is printed with artwork inspired by symbolic Japanese motifs, from the eggplant to Mount Fuji. The Molloys then commissioned artist Victoire Cathalan to create prints based on each of the 11 canvas cases, which are displayed around the space in Harrods.

Rollout will be selective — as the “retail theater” aspect of the brand requires a certain amount of space and staff to convey the Molloys’ vision.

Take the welcoming ceremony that occurs when customers enter the boutique. Once someone is seated at the bar, a “ceremony master” immediately gives them a warm hand towel and serves them a Japanese-style tray with a cup of custom Floraïku tea (flavors will change seasonally) and a green tea biscuit printed with a haiku. From there, a second tray is placed in front of the guest that contains slots for fragrance blotters so they can smell each scent by family. After a brief overview of the brand, each “ceremony” is introduced in the following order: Secret Tea and Spices, Enigmatic Flowers and Forbidden Incense. Consumers are asked to select their top three and place them in the “shadowing” portion of the tray before the final step of the ceremony, which is the reveal of the Light and Dark Shadows. The Shadows are the brand’s version of layering, but there is a twist. The founders strongly urge fragrances not be sprayed on top of one another, but adjacent to each other on one’s arm (or wherever one wishes to wear scent).

Despite Memo Paris being sold exclusively at Harvey Nichols in the U.K., Harrods is the exclusive global launch partner for Floraïku and will remain the sole retailer to carry the brand in the U.K.

“We don’t want to open distribution for Memo Paris. We have the opportunity to be somewhere else with another brand. Instead of being everywhere like other brands, we did something new,” Clara Molloy said, adding that the goal is to build a house of four or five brands, not all of them being fragrance.

Following Harrods’ rollout, Floraïku will launch in high-end department stores over the next year. John Molloy was vague about which retail partners he and Clara are working with, but said a “New York department store” will open a shop-in-shop in 2018.

Similar to Memo Paris, which operates a freestanding store in Paris and is soon opening boutiques in Moscow and Dubai, Floraïku will open stores where subsidiaries in local markets exist or where there are existing Memo Paris shops. Floraïku will have a more selective distribution than Memo Paris, which is sold in close to 400 doors throughout 30 countries.

“We’re trying to look at a disruptive approach at how we do this. Rather than go to hundreds of stores in the world — niche has been getting wider and wider in distribution — we want to have depth and have bigger stores and partners,” John Molloy said.