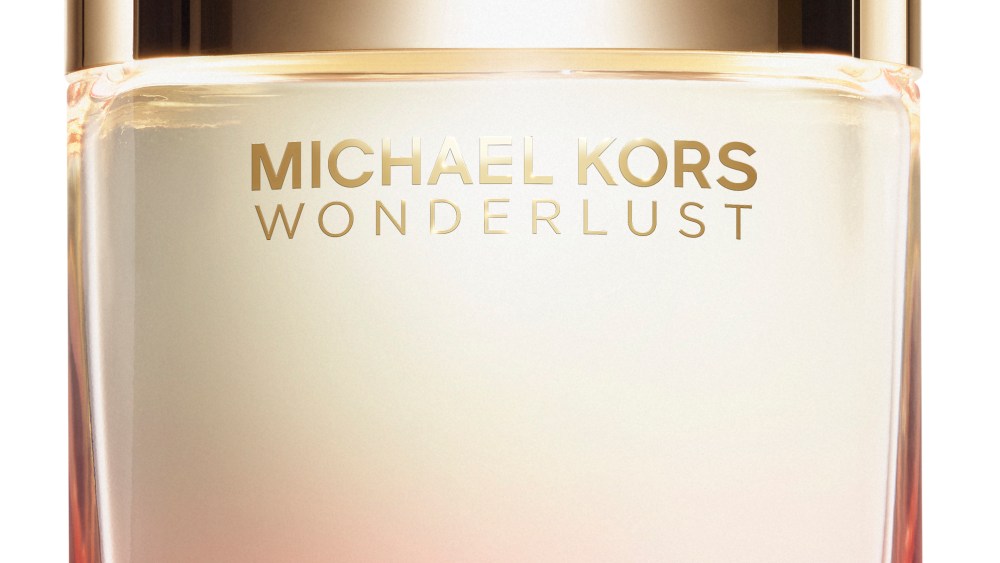 With the upcoming launch of his new Wonderlust fragrance, Michael Kors has certainly not wavered in his belief that what the fashionable youth want is to take off for exotic locales.

A play on the word “Wanderlust,” meaning the strong desire to travel, this will be the first major scent introduced by the designer since the Michael Kors Collection of Sporty Sexy Glam came out in 2013. The fragrance — which will retail for $62 to $108 and includes a $28 rollerball option, a $38 body wash and $48 lotion — will go on sale in early August.

The concept of “escape” is central to the Wonderlust story, Michael Kors told WWD. This story, he elaborated, includes a corresponding ad and video campaign depicting the face of the scent: a gold, sequined-dress-clad Lily Aldridge, in an unknown far-flung locale. She is escaping from a yacht into a small speedboat with her paramour, Dutch model Wouter Peelen, into a rose-fueled sunset.

“If you were on that yacht, you would be drinking a good rosé,” Kors said of the tie-in between campaign and the design of the bottle, a coral ombré with a gold neck and cap.

“I love the rose color; it’s the first grab for most of our girls…and the ombré effect of bottle and box, [has] this effervescent that would come from a good, pink champagne. It has that attitude,” Kors said. “In this instance, there is a girl who is at a party and says, ‘Lets get the hell out of here.’”

Daniel Annese, global brand president of Aramis and designer fragrances at the Estée Lauder Cos. Inc., confirmed that Wonderlust is the largest launch this season for the division. He said Kors’ fragrance business has grown more than fivefold in the last four years.

He declined to give projections, but an industry source said retail sales for Wonderlust’s first 12 months are expected to hit $60 million. The Michael Kors fragrance portfolio — composed of six permanent fragrances as well as limited-edition scents — is said to be a $300 million business.

Wonderlust will be distributed in more than 12,000 doors globally, including 800 freestanding Michael Kors stores.

A corresponding teaser campaign will go live on digital influencers’ social media channels today to generate buzz, with an official reveal occurring in early August on the brand’s own social platforms. The campaign, shot by Mario Testino, will hit online outlets and September issues in August, and TV spots will start to air on network and cable stations during the holiday season.

Annese said the goal with Wonderlust is to reach a broader audience than the company has in the past. With previous scents, such as the Sporty Sexy Glam trio, roughly 70 percent of sales were generated in 2013 in the U.S.

“As we have built the Michael Kors business, more than half the business is now generated in international markets. As people discover the fashions, they are discovering the fragrances,” Annese said.

For Wonderlust, the executive expects about 60 percent sales to come from international markets and 40 percent from the U.S.

Michael Kors agreed. He said the most significant evolution his fragrance brand has experienced is an uptick in its global appeal.

“It used to be that it [a fragrance] was specific. This fragrance is great for the American market, or this is great for the Middle East, or ‘They are going to love this in Europe,’” Kors said, adding that women had a lot more rules with fragrance when he was starting out, such as wearing only a particular kind of scent.

But people now realize it’s about mood, he said. It’s about the same woman who has a lot of moods, and the designer hopes Wonderlust appeals to one of them.

Trudi Loren, senior vice president of fragrance development at the Estée Lauder Cos., called the fragrance a “new territory” for the designer. The hope is that the scent appeals to American consumers, a global market and Millennials.

Created in partnership with Firmenich by perfumers Aurelien Guichard and Honorine Blanc, gourmand (a synthetic note with “edible,” sweet qualities) was mixed with the dianthus flower to give Wonderlust the feel of an almond milk that’s been blended with a “spicy, creamy floral.”

She said the almond milk accord on top (the fragrance’s signature) is followed into heliotrope, the heart of the scent. The base note is benzoin, a natural resin hailing from Thailand that Loren described as warm and “cinnamon-like.”

“Really, it’s the ability to bridge the gap between the North American and international markets with something that’s floral and oriental, but with that gourmand piece that is important for the younger consumer,” Loren explained, noting that out of the top 30 fragrances in the U.S., 42 percent are floral. In international markets, she said, florals are less popular and orientals, or amber fragrances, perform better at retail.

“I’ve never done another thing that had anything kind of gourmand touch to it at all,” Kors said.

Typically, when the designer thinks of gourmand, he’s reminded of things like bubble gum, which is why he’s never used the ingredient in any of his scents thus far.

“It can get very sticky sweet to me and our girl quite likes to experience, but the idea of edible fragrance isn’t in her wheelhouse,” he said. “But to be able to take a gourmand situation and have an oriental and merge it all together makes it very Michael Kors. What I do is always a bit of a yin yang.”

The designer said he’s the first to pair a beaded dress with saddle shoes or a sable coat with torn jeans. And fragrance is no different.

“I wanted something that’s feminine, [and] not in an insipid way, [but] in a streamlined, modern way. It’s the same way with the gourmand. The almond milk has something delicious, but not edible or sticky,” the designer continued. “Our girl is looking for a way to experience and have fun but stay within her world.”

The designer also loves to have plenty of company. Kors and an entourage of 16 global influencers — including Garance Dore, Margaret Zhang, Linda Tol, Jeanne Damas and Veronika Heilbrunner — is scheduled to arrive in Greece for a three-day trip toasting the launch of Wonderlust. They will share candid images and videos of their trip to Amanzoe, a resort on the eastern Peloponnesian peninsula, with their combined millions of social media followers.