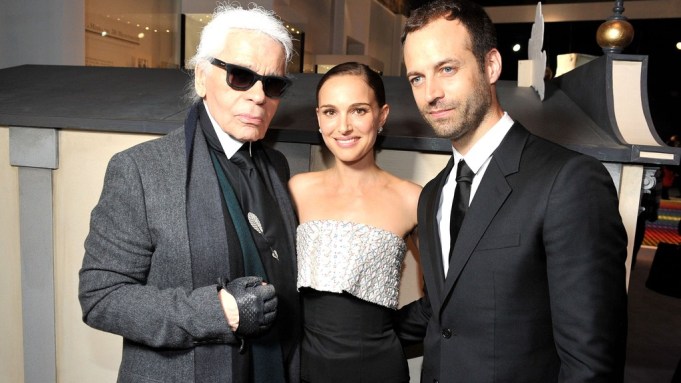 “It is also an homage to Christian Dior’s sister, Catherine Dior, [who was in the Resistance] and deported during the Second World War and who has become a muse for the artists who worked on the codes of Miss Dior and the fragrance,” explained Hervé Mikaeloff, the show’s curator.

Fifteen female contemporary artists from around the globe and working in different media, ranging from painting to sculpture to installations, were given carte blanche to create large-scale works inspired by Miss Dior. Mikaeloff said they each had a different interpretation but shared a global vision.

Chinese artist Liang Yuanwei’s oil painting, which kicks off the show, is evocative of the Miss Dior dress with thousands of embroidered flowers that was made by Christian Dior for the launch of the fragrance. “There is an optical illusion that is rather astonishing,” said Mikaeloff.

Each artwork is accompanied by a reference to what part of Miss Dior inspired it, like its name, bottle or houndstooth packaging.

To accompany Yuanwei’s work, for example, is the dress by Dior.

Iranian photographer and filmmaker Shirin Neshat took a cue from Natalie Portman, who fronts Miss Dior fragrance advertising. Neshat’s black-and-white film of the actress — in an old, looming house and on a deserted beach, with a preponderance of blurry images — is set to music specially composed by Johnny Azari.

“It’s like a reference to a silent film, a surrealist film — to films by [Luis] Buñuel — an epoch that was also important for Christian Dior because he made numerous exhibitions on surrealism,” said Mikaeloff.
Springboarding from the Miss Dior flacon, Brazilian sculptor Maria Nepomuceno conceived a colorful installation replete with beads, plastic and crochet.

“They asked me to think about houndstooth,” she explained. “I thought it would be really interesting to take two systems, one that I had developed in print form that was a rainbow kind of roll of color, a kind of split fountain of color, and then take the houndstooth and superimpose that. [There were] some interesting kinds of surprises. It’s much more optical than I thought.”

“I work with nature anyway — the structure of nature, usually the structure of space and light and perception — so I wanted to make something that was like a rose but then also certainly my own work and something more like a deconstructed rose,” she said.

Her piece involves a steel structure and dichroic film, which is colorless but separates color out of white light, so the sculpture changes hue according to the angle it’s being viewed at or the light at various times of day.

French artist Carole Benzaken likened the creation of a scent, with its numerous olfactive layers, to that of a sculpture. Her work includes a bottle with blown glass branches (done with Stéphane Rivoal) that are symbolic of fragrance spreading in space.

“A perfume speaks about three-dimensional architecture,” she said.

There are also seven glass blocks reminiscent of the Miss Dior cap on which Benzaken created backlit images of tree branches in three layers — made with ink, pencil and paint — like a fragrance’s top, middle and base notes.

One part of the exhibition — held on a mezzanine — presents works from artists who inspired Dior, notably during the period when he owned an art gallery on Paris’ Rue La Boétie from 1928 to 1934. There, he showed oeuvres by Salvador Dalí, Pablo Picasso and Alberto Giacometti.

At the show, too, are rare photographs and some outfits ranging from emblematic couture to the dresses Dior’s current women’s designer, Raf Simons, created for Portman.

Portman, Sophie Marceau, Karl Lagerfeld and Benjamin Millepied were among VIPs who gathered Wednesday evening at the Grand Palais for a cocktail party to fete the opening.