Groupe Clarins-owned brand is banking on the appeal and differentiation potential of its sustainability initiatives. 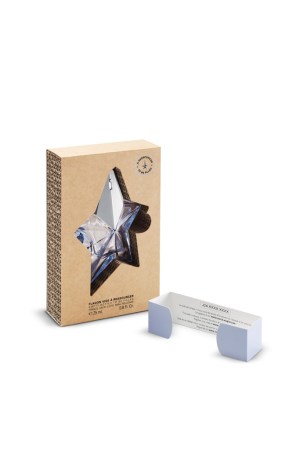 PARIS — Groupe Clarins-owned Thierry Mugler is banking on the appeal and differentiation potential of its sustainability initiatives with the expansion of its La Source fragrance fountain concept.

A new quadruple Source, which will launch in 4,000 sales points worldwide this year, is to initially offer Angel Eau de Parfum, Alien and Womanity — for the first time available in the fountain — and will add Angel Eau de Toilette as its fourth option beginning in September. In the U.S., the new La Source will be exclusive to Sephora, starting in April.

“We feel it’s very much in the trend of what consumers expect today, because it combines economy and ecology,” Clarins Fragrance Group president Joel Palix explained.

The brand’s Angel fragrance has been available in a refillable format since its 1992 launch, allowing consumers financial savings of around 40 percent as well as waste reduction.

Some 44 percent of Mugler’s French fragrance sales stem from the Source, said Christian Courtin-Clarins, president of Groupe Clarins supervisory board. An international share was not available, but Palix said it is “significant.”

Courtin-Clarins continued, explaining that while biodiversity and environmental protection have always been important to the group, part of the reasoning behind Angel’s original bottle being refillable was the high cost of producing its star-shaped bottle. “From constraint comes creativity,” he said.

True to Mugler’s sustainable standpoint, existing fountains will be recycled for use in emerging markets like Asia and South America.

The new fountain will be rolled out across all 11,000 Source doors over a two- to three-year period.

Alongside the launch, Mugler is introducing what it claims are the selective market’s first-ever empty bottles, to fill and refill. These are housed in a code-breaking corrugated cardboard box. “It’s very impactful in a perfumery environment,” Palix commented. They will generally be offered free of charge with the purchase of the fragrance.

“Most of our competitors are busy launching new fragrances. We don’t launch many fragrances, we launch every five, 10 years, and in the meantime we build our existing fragrances,” he said.

Clarins executives declined to give sales predictions. However, according to industry sources, La Source does around $200 million in retail sales worldwide annually, and the incremental business could lead to a sales increase of 10 percent in 2013.