Narciso Rodriguez is headed back to the fragrance counter with a new women's brand due this spring. 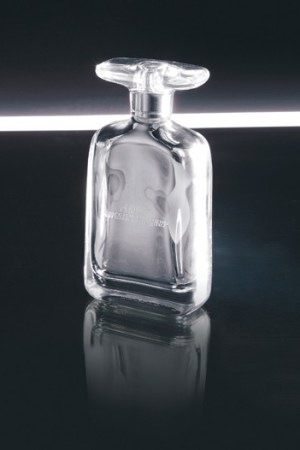 Narciso Rodriguez is headed back to the fragrance counter with a new women’s brand due this spring. Essence, the designer’s second fragrance franchise, will be launched in March in the U.S. and globally in April, in limited distribution.

This story first appeared in the December 19, 2008 issue of WWD. Subscribe Today.

“I wanted to create something that reflected the house, but something fresh and new,” Rodriguez said during a recent interview at the Gramercy Park Hotel here. Rodriguez’s first fragrance, an eau de toilette dubbed For Her, made its debut in fall 2003, and an eau de parfum version was launched in fall 2004. His sole men’s scent, For Him, was launched in 2007.

“Essence is very sexy but has that crisp, clean, pure quality of sunlight,” continued Rodriguez. “It’s a bit of a collage — the iris, rose and amber that I love — and how you can layer these things over the musk and create that feeling of joy. It’s about a different facet of a woman. As there is day, there is night,” he said, referring to the difference between the two brands. “This is a great reflection of that. Essence is quite pure, fresh and sexy, where For Her is more seductive,” he said, implying that the original scent is geared more for evening. “This is a clean take on that same girl.”

While many designers supplement their launches with numerous flankers, Rodriguez has long preferred a more restrained plan. “I value the slow- and-steady approach, especially with something like fragrance, where you really need a great deal of time to think about it and develop it and refine it,” he said. “I’m interested in creating things that are lasting, that have great substance and thinking behind them. They’re based in design and craftsmanship.”

The Essence juice, concocted by Firmenich’s Alberto Morillas, is a floral, powdery musk with notes of iris powder, rose petals and benzoin balm built around a heart of modern musks. Musk is the designer’s signature note and has appeared in all of his scents in one form or another. “I love [musk] so much for its beautiful qualities, its rawness and its sensuality,” said Rodriguez.

The bottle, a rounded glass with a mirrored core, was created by Rodriguez and designer Ross Lovegrove. “It’s an idea that started with For Her. I loved the idea of duality, that you have to get close to someone to know what they are on the inside. The packaging for For Her was that: there was this very mysterious black bottle encased in another classic bottle. Now that idea has been reinvented for Essence and made very modern and very sensuous by this futuristic but very accessible and very tactile bottle. It’s not some fabricated version of futurism. It’s modern beauty.”

While the fragrance’s official global on-counter date is April, the scent will actually bow in the U.S. on March 1. The U.S. is getting a one-month jump because Rodriguez is an American designer, noted Eric Henry, chief operating officer of BPI globally.

Other global exclusive engagements of varying lengths will be at Harrods in the U.K., Galeries Lafayette in France and Lane Crawford in Hong Kong.

Eventually, it will be available in close to 50 countries in which Rodriguez’s scents are already distributed, said Henry.

Advertising, featuring Catherine McNeil and shot by Inez van Lamsweerde and Vinoodh Matadin, will run primarily outside the U.S., although the visual is expected to be used in Saks Fifth Avenue promotional efforts. More effort in the U.S. will be placed on the brand’s Muse program, which involves individually hand-selling fragrances to clients via personal service and deluxe sampling. “Narciso Muses build the business person by person, store by store,” said Munafo.

“The product is the key to success, but the other 50 percent is the people that make it happen,” added Henry.

Rodriguez, Henry and Munafo declined to discuss sales projections and advertising and promotional spending. Industry sources estimated that Essence would do upwards of $20 million at retail globally in its first year on counter.

As for the economy? “It’s almost a bit of an exciting challenge,” said Rodriguez. “Good things are born from hard times. For me, creating products, things that are more desirable, delivering things that are better made out of better fabrics that might even be more expensive — we’re not slashing prices. I think that’s the wrong strategy. Certainly, I hope women find this to be the antidote for hard times, that this gives them as much pleasure in this economy as it gave me creating it.”