Josie Natori is extending her feminine touch once more to fragrance with the launch for fall of Natori, her newest scent.

By Gillian Koenig on May 8, 2009
View Slideshow 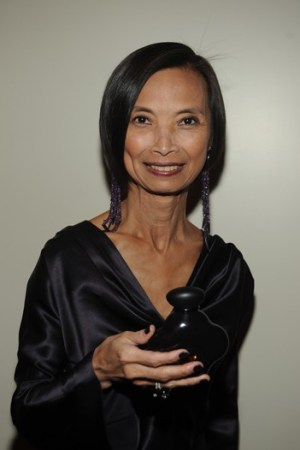 Josie Natori is extending her feminine touch once more to fragrance with the launch for fall of Natori, her newest scent.

“I wanted something sensual, something authentic,” said the lingerie designer during a dinner at her Upper East Side apartment. “I grew up with very rich fragrances. I detest anything citrus, and I hate sweet, but I wanted something you could keep putting on.”

Inspired by scents her grandmother wore like Joy by Jean Patou and Bal à Versailles, as well as the smell of peonies and jasmine from her native Philippines, Natori has been tinkering with the exotic scent on and off for the last 10 years.

“It’s a modern evolution of something I developed in the Eighties. We updated the original ingredients, and now we’ve perfected it,” noted Natori, who launched her original fragrance, also called Natori, in 1984. She embarked on that fragrance franchise without a business partner, and only about five years into her luxury lingerie company, which she cofounded with her husband, Ken, 31 years ago. “I jumped in without doing the homework,” she said of her first fragrance foray. The memory of the debacle was strong enough to register in her voice. “I didn’t realize you needed partners who are in the business and have the infrastructure.

“I always believed the concept of fragrance was right for the brand, but I had no idea what it took to get into the fragrance business from a financial standpoint,” said the designer, with a doeful laugh. In the mid-Nineties, she found the groove by working with Avon Products Inc. on another fragrance.

This time around, Natori has teamed up with Parlux Fragrances Inc. to produce, market and distribute the Natori fragrance line. Scheduled for an exclusive three-month launch at Saks Fifth Avenue beginning Aug. 3, Natori marks Parlux’s entry into specialty stores. The company’s portfolio includes celebrity scents from Paris Hilton and Jessica Simpson, as well as the more tightly distributed Guess, along with XOXO and Ocean Pacific. The big launches scheduled for summer are Queen by Queen Latifah on Aug. 1 and a new fragrance by Marc Ecko in September. “For the first time with the Natori launch we will be in the specialty store arena — Saks is a new retailer for us,” said Neil Katz, chief executive officer of Parlux Fragrances, which will also launch Nicole Miller’s fragrance this fall. “We’re targeting a 35-plus sophisticated person who may be involved with her lingerie.”

Said Natori of the partnership: “We are special to Parlux, different to them, and I love that. The commitment is there. Anywhere else we would have been one of 10.”

The designer and Katz declined to discuss numbers. But according to industry sources, Natori’s new fragrance could do $10 million in retail sales in its first year.

Natori worked with perfumer Caroline Sabas of Givaudan to create the sparkling floral oriental. Meant to balance the allure of the East and the modern elegance of the West, Natori’s top notes are of sparkling aldehydes, rose petals and dark plum; its heart is of ylang-ylang, purple peony and night-blooming jasmine, and the drydown is of black patchouli, mysterious amber and satin musk accord.

The scent’s rich purple flacon, which complements its amber-colored juice, was inspired by the lotus flower and designed by Dale Kan of Brandology. “It’s very tactile,” said Natori of the bottle. “We wanted it to be modern but authentic at the same time. The aubergine color is to give it depth.”

“I wanted to make Natori accessible to women who might not shop our lingerie,” said the designer, who noted she plans to add massage oil, soaps and diffusers to the Natori collection. Natori’s five in-house fashion lines — Josie Natori Collection, Natori, Natorious, Josie and Cruz — include home textile products in addition to lingerie. Earlier this year, the designer launched Natori Bath in partnership with Loftex USA, and Natori Eyeware with Zyloware.

The primary thrust of the distribution will consist of a three-month exclusive with Saks, complete with window displays. According to Katz, Parlux will probably spend an amount equal to about 40 percent of sales to build the Natori brand and execute advertising.

A print campaign features Natori’s purple bottle rising above a shimmering aubergine seascape with a rippling tide and is based around the concept phrase: Every day a new journey begins. Created by ad agency Avrett Free Ginsberg and shot by Yucel Erdogan in New York last month, the advertisement will target September luxury lifestyle books including Vanity Fair, Condé Nast Traveler and Town & Country.