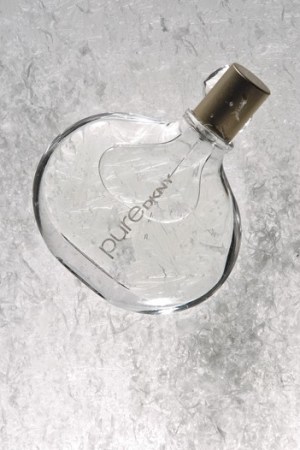 With PureDKNY, Donna Karan’s newest scent, the designer and her fragrance licensee are aiming to tackle both the natural and philanthropic worlds.

This story first appeared in the February 5, 2010 issue of WWD. Subscribe Today.

“We’re bringing a new fragrance to the world and plan to show how we can build a sustainable platform,” noted Veronique Gabai-Pinsky, global brand president for Aramis and Designer Fragrances, BeautyBank and IdeaBank at the Estée Lauder Cos. Inc., noting the DKNY franchise is one of the largest global businesses in the Aramis and Designer Fragrances portfolio. “We wanted to create a juice around one raw material, and we wanted ethical living to be at the forefront.”

That goal included a deal with CARE to source Ugandan vanilla, the central note of the fragrance. “CARE is excited to partner with PureDKNY on an initiative that will support women in Uganda, while also educating U.S. consumers about the important role women play in breaking the cycle of global poverty,” said Helene D. Gayle, president and chief executive officer of CARE. “CARE has been working in Uganda since 1969, and has a long history of helping women create their own small businesses through our Village Savings and Loan Association model. With PureDKNY’s support, nearly 1,000 women will gain new business skills through participation in this program, better equipping them to make lasting change for themselves, their families and their communities.”

The vanilla is also a boon to the scent itself, noted Trudi Loren, vice president of corporate fragrance development worldwide for Estée Lauder, who worked with Firmenich to create the scent. “Ugandan vanilla, which is a secondary crop for farmers there, has a creamy fluidity not found in vanilla sourced elsewhere,” she said.

In addition to the vanilla, the juice has top notes of dewdrop petal accord, lotus flower and Bulgarian rose; a heart of transparent jasmine, freesia and lush orchid, and a drydown includes white amber, creamy sandalwood and vanilla in water.

“PureDKNY speaks to the core essence of who I am and what I want to touch — the people and children I love, and being at one with nature,” noted Karan. “It’s about those little moments that bring you joy, pure and simple. Sometimes, those simple things are the hardest to find.”

Added Eileen Daly, executive director of global marketing for the scent brand: “The concept is that the city moves quickly every day — and this scent offers a moment of rest.”

The scent is being launched globally now, to be followed by a July rollout in the U.S.

While the executives declined to discuss sales figures, industry sources estimated PureDKNY could do as much as $120 million at retail globally in its first year on counter, with the U.S. expected to account for about $30 million of that figure. In the U.S., it will be available in about 2,000 department and specialty store doors.

The campaign will include both TV and print advertising ­— with Angela Lindvall as the face of the campaign — and print ads will break in September books, said Carol Russo, senior vice president and general manager of sales and marketing, North America, Aramis and Designer Fragrances. Russo and other executives declined to comment, but industry sources estimated that at least $20 million would be spent on advertising and promotion in the U.S. during PureDKNY’s first year on counter.