Mademoiselle Ricci is a women’s fragrance meant to embody the label’s romantic side. 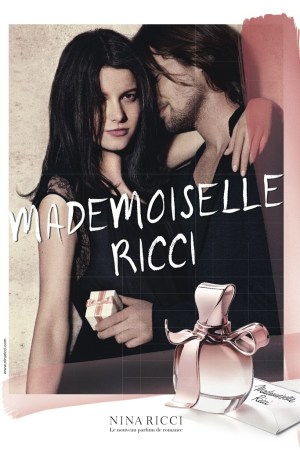 PARIS — Parfums Nina Ricci is about to launch Mademoiselle Ricci, a women’s fragrance meant to embody the label’s romantic side.

“It’s all about romance, about femininity, about elegance in a modern way,” he said of Mademoiselle Ricci, which is expected to have as its core target the 25- to 35-year-old set. “It’s about love — a declaration of love.”

To wit: The fragrance’s advertising video filmed by Johan Renck was created as a romantic comedy. Set in Paris at night, a young man (James Rousseau) proposes to his girlfriend (Tati Cotliar).

“It’s one of the most important places for [Nina Ricci],” said Albesa, referring to the City of Light.

The 20- and 30-second spots will be shown on television and in movie theaters. Mark Segal photographed the print campaign, which comes in single and double pages. The image features the couple, with the man holding a box — reminiscent of Mademoiselle Ricci’s outer packaging — tied with a pink ribbon.

Mademoiselle Ricci’s bottle is topped with what appears to be a metallic pink ribbon. It takes the same form as the Ricci Ricci fragrance, which was introduced three years ago and is Nina Ricci’s number-two scent brand — after Nina — ranking in the top 30 in its largest market, France.

The new fragrance’s name is a nod to the Mademoiselle Ricci fashion collection launched in the U.S. in the Sixties.

Mademoiselle Ricci will first be introduced in France on Aug. 6, followed by a rollout in other European countries, Asia, the Middle East and Latin America by September.

Puig executives would not discuss sales projections, but industry sources estimate Mademoiselle Ricci will generate 75 million euros, or $92.2 million, in retail sales during its first 12 months.