Celebrity Fragrances on the Move 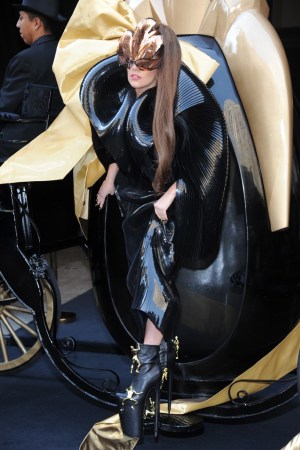 “This is pretty much the coolest thing, because I also do clothing — I love clothing, nails and fragrance, hair, makeup, all that stuff,” said Lavigne during an exclusive phone interview with WWD .“I was really excited about the Salon Effects Real Nail Polish Strips — especially since they’re superquick.

“I’ll be flying on a plane and be like, ‘S–t I need to do my nails,’” a candid Lavigne added in January. “I can do these on a plane; I’ve done them in the car. The designs that I came up with are my personal style and vibe — they’re rock ’n’ roll and fun and bright and colorful. You have sparkles and little stars — they are cute.…I think this offers self-expression, and it’s a really smart, versatile way to show your style.”

Two of the most talked-about, hotly anticipated fragrances finally came to market: Madonna with Truth or Dare in April, and Lady Gaga, with Fame — said to be the first black-tinted juice on the market — in August. Both are produced by Coty.

“The time was right,” Madonna told WWD in April of partnering with Coty Prestige. “I’ve been working off and on on various fragrances over the years, and [have been] approached by a lot of companies and have tried to create fragrances. They were always abandoned projects. I’ve always loved perfume; it’s always been a big part of my life. But every time I tried to create the scent I was looking for, it never reached the stage where I thought it was good enough or I was told that the ingredients would be impossible to re-create in a mass way. Then I’d say, ‘Let’s try and do a synthetic version,’ and it never smelled as good as I wanted it to. And if I’m not going to wear it, I’m not going to sell it. So, I finally was able to create, with my partners [MG Icon and Coty], a fragrance that I could stand behind.”

In her typical shock-producing way, Gaga told WWD of her scent, “I don’t think it really matters how it smells. I’m not trying to be funny, but I guess what I’m trying to say is that in the celebrity fragrance world, you’re buying a fragrance because you like the celebrity. So the challenge for me was to say that I’m going to create something that I think you would love if you didn’t like me. [Also,] it’s a nice and expensive way for Steven Klein and Nick Knight to take a big p–s on commercialism.…This is not me in the bottle — it’s an expression of me and my relationship to fame as a performer. The darkness stays inside the bottle and out comes only the beautiful parts of Fame.”

Adam Levine, who had in the past publicly disdained celebrity fragrances — he tweeted the following on March 5, 2011: “I also would like to put an official ban on celebrity fragrances. Punishable by death from this point forward.” — announced he is doing one for ID Perfumes. The project, a fragrance masterbrand called 222 by Adam Levine, is due out in May. “People do this to make money, I’m not going to lie to you,” he told WWD in March. “Obviously, there’s a financial part to this as well. But there are other things that come into play, too, and I’m not just going to sign off on something if I don’t love it. I want to tailor it to me as much as humanly possible.”

And then there was the story heard around the world (literally): the interview Katie Holmes gave to WWD in September, the first after her high-profile divorce from Tom Cruise. A personable Holmes — who is working with the Bobbi Brown brand as its first celebrity face and collaborator — talked about everything from Holmes & Yang, her fashion line with her longtime stylist Jeanne Yang, to how her Midwestern upbringing and crafts with her daughter Suri help keep her feet on the ground. “I spray-paint shoe racks, because, why not?” But she said with a laugh that said projects aren’t always successful: “I think, ‘Oh, I’m a great mom’ — and then it doesn’t really pan out the way I think it’s going to. But the intention’s there.” And while it might be expected that Holmes would hate the Fourth Estate — which basically stalked her after her divorce — she takes it in stride. “There are a lot of people with much bigger problems and who are less fortunate,” she told WWD. “I try to keep it all in perspective.”