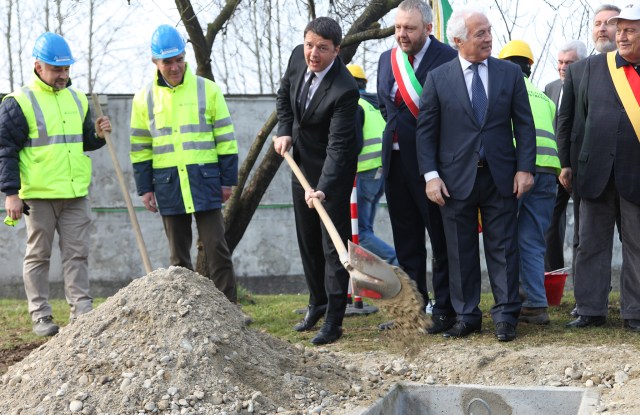 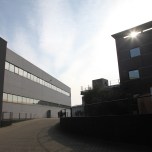 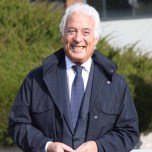 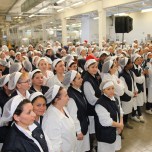 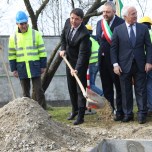 LODI, Italy — Before he headed to Milan for lunch with leaders of Italy’s fashion industry, Prime Minister Matteo Renzi stopped by this town about 25 miles away to lay the symbolic “first stone” of a plant expansion being built by one of the world’s leading perfume manufacturers, Industrie Cosmetiche Riunite.

During the ceremony, Renzi said the maker of luxury-brand fragrances embodies Italian business at its best and benefits brought forth by his administration’s government reforms.

Standing at a podium on the factory floor with a crowd of workers in crisp white lab coats on one side and a mass of photographers and journalists bundled in dark winter coats on the other, Renzi said that ICR hired 205 workers last year. After consulting with ICR chairman and president Roberto Martone, who stood next to him, the prime minister added that 182 of those workers owed their new full-time employment status to the Jobs Act passed last year, which provides employers tax breaks for new hires and makes firing them easier. ICR said it currently has over 500 employees.

Renzi called ICR “an example of the most beautiful Italy that continues to march forward” despite the country’s difficult economic climate, which his administration is making efforts to improve.

Renzi also unveiled new tax breaks planned in 2016 for business investments like ICR’s aimed at renovating production. Martone told WWD that the anticipated write-offs, which have not yet been passed, would impact roughly 3 million euros, or $3.29 million at current exchange rates, out of a total investment of 10 million euros, or $10.9 million, for the additional facility.

Martone and Renzi signed a document, tucked it into a cylinder and ceremoniously sealed it into a cement block bearing the plaque “first stone.” The gesture was purely symbolic since construction is well underway on the 100,000-square-foot expansion to ICR’s current 466,670 square feet of production space.

Set for completion in November, the new structure will enable the perfume maker to add new levels of automation and a range of services to create small-batch, deeply researched, exclusive scents now requested by the luxury market, according to Ambra Martone.

She is an ICR board member and daughter of the president, and works at the family firm along with her sister, Giorgia.

“Even big brands say that their customers are tired of products that are overly commercial,” said Ambra Martone. She added that the new breed of niche, super-luxury scents retail for $330 or more for 100 ml or 150 ml, and that ICR was in final-stage talks to produce new product.

“You don’t have the cats until they’re in the bag,” said Roberto Martone, although he revealed that ICR had just renewed a long-standing production agreement with Bulgari for another seven years.

Other brands with direct production agreements with ICR include Salvatore Ferragamo, Emanuel Ungaro, Pomellato, Collistar and Asprey. Meanwhile, ICR continues to manufacture perfumes for DSquared, Blumarine, Trussardi, Gianfranco Ferré and Custo Barcelona through its former marketing and distribution affiliate, Italian Fragrances, which holds the licenses for those brands. The Spanish Gruppo Angelini last year completed its acquisition, having already bought a 60 percent stake in 2013.