The super hot British-Irish boy band unveiled the new fragrance, called Our Moment, at the top of The Gherkin in London. 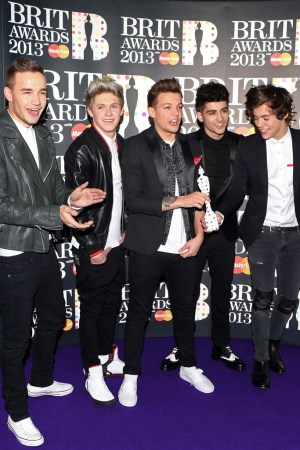 LONDON — The super hot British-Irish boy band One Direction unveiled its debut women’s fragrance in London Thursday at the top of The Gherkin, one the city’s most famous buildings. Called Our Moment, the scent is named after “Moments,” a song that appeared on the group’s first album, “Up All Night.”

The scent has been over a year in the making, and was in collaboration with fragrance company Firmenich. The juice has fruity top notes of pink grapefruit, wild berries and red currants. At its heart are floral notes of jasmine, freesia and frangipani, and the base is formed from creamy musk, sheer woods and white patchouli.

The band’s members, Louis Tomlinson, Niall Horan, Liam Payne, Zayn Malik and Harry Styles, are midway through their “Take Me Home” tour, and are just about to begin the U.S. leg of the tour.

“It’s not too strong and it’s quite sweet and subtle, rather than it being a bit more in your face,” Payne told WWD of the scent. “Too strong is not what any of us are into.” Given that there were five opinions involved in the creation of Our Journey, the band insists it was a dispute-free project. “We kind of just agreed on it,” said Tomlinson. “We’re all, like, into the same sort of thing. It was actually easy in that respect. The people we were working with were a great help. They were, like, making really good stuff, and we were, like, ‘That’s great!’ They gave us what we wanted.”

As for which scents the band wears, for Louis it’s Gucci Guilty, for Zayn it’s Dolce & Gabbana Light Blue, and Liam wears “something from Hugo Boss.” When they were younger, however, they all admitted to wearing Lynx (“Lynx Chocolate was the best,” said Payne) and dabbling in their fathers’ aftershave. “When you were a kid, though, didn’t you rob your dad’s?” asked Tomlinson. “I was big into robbing my dad’s. Always rob your dad’s! That’s the message I’m saying: Always steal your dad’s.”

The outer packaging is a pale pink and features the faces of band. The bottle is a faceted glass sphere that looks like a cut jewel, topped with a silver crown that houses a pink mesh flower.

“I hope it’s not one of those things they throw on stage, because those are going to hurt,” mused Payne. “Someone threw a box at me once and it hit me [on the arm], and I was thinking, ‘What if that just hit me in the face?’”

The license for the scent is owned by Eden Parfums, which is a subsidiary of Imperial Pharmaceutical Group and owned by chief executive officer Nayan Thakrar. Eden purchased the license from Olivann Beauty, a division of Fusion Brand Inc.’s luxury fashion division, in February this year, along with all the assets that had been developed before the sale.

Eden declined to comment on first-year sales projections, but industry sources said they expect it to make $120 million in first-year retail sales in an estimated 10,000 doors.

The fragrance will be supported by a television and online campaign directed by Vaughan Arnell, who is best known for the music videos he has made for the likes of Robbie Williams, George Michael, Jamiroquai and One Direction, among others. A print campaign will feature the same black-and-white images of the band members that appear on the box.

Given the band’s legion of young and digitally savvy fans, a digital marketing campaign will be central to the scent’s promotion strategy. “Digital channels are hugely important; the boys have huge numbers of followers through their own Facebook and Twitter feeds, so we’ll be using One Direction’s digital media to heavily promote the fragrance,” said Faye Langworthy, fragrance license manager for Modest, the company that manages the One Direction brand.

This project actually came about because a fan began a campaign on Twitter and opened a petition to get the band to launch a fragrance. “We knew about the campaign, and we thought, ‘Why not do it properly and put our names to it?’” said Payne.

There are more fragrances planned for One Direction, but the band could feasibly venture into fashion. What about a line of men’s clothes? “That would be cool! That would be quite sick!” enthused Tomlinson. “Something quite small. Or T-shirts; something quite discreet, though. Or jeans, a skinny fit in black, they’d sell.” “That’s all you wear,” quipped Payne.