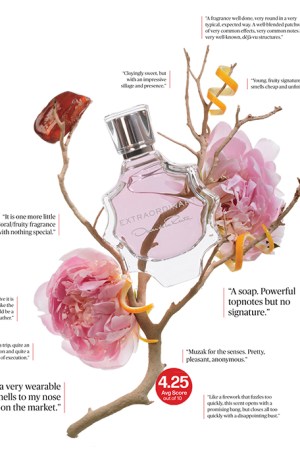 In an effort to place critical value on the contents inside a bottle of fragrance rather than the marketing machinery, WWD’s panel of experts directs its attention to Oscar de la Renta’s Extraordinary.

Panelists are given unmarked vials of fragrance to smell in a blind, impartial test. The fragrance will be scored on a scale of 10 (the ultimate) to 1 (forgettable), with an average score computed.

The judges, chaired by Michael Edwards, will make short critiques of each fragrance, which will be kept anonymous to ensure independent thinking. Scents being judged are new to the market and among the sector’s most promising. WWD will buy them at retail, like any consumer.

For the second edition of The Smell Test, our jury reviewed Oscar de la Renta’s Extraordinary, which was the first fragrance produced by the fashion house’s new licensee, Inter Parfums Inc. The scent, developed with a one-year lead time, was created at International Flavors & Fragrances Inc.

The Verdict: The verdict on this fragrance has some judges pointing out a gourmand characteristic and others noting a fruity, youthful feeling. But most said the formula did not fulfill its early impression. Terms like “common effects” were used. One judge allowed that a sense of sameness was “not necessarily a bad thing — this scent is a good summary of Macy’s perfume department.”

“Cloyingly sweet, but with an impressive sillage and presence.”

“A soap. Powerful topnotes but no signature.”

“Like a firework that fizzles too quickly, this scent opens with a promising bang, but closes all too quickly with a disappointing bust.”

“This is a very wearable gourmand. Smells to my nose like many others on the market.”

“Quite a trip, quite an impression and quite a feat of execution.”

“Although not hugely innovative it is pleasant and for those who do like the Big Gourmand Perfumes this would be a good alternative for hot weather.”

“It is one more little floral/fruity fragrance with nothing special.”

ABOUT THE TEST AND JUDGES: This is a blind test, panelists are given vials of unidentified scent to judge impartially. Each of them gives a score ranging from 1 (forgettable) to 10 (unforgettable) and the numbers are computed into a final grade. The judges, led by chairman Michael Edwards, also make critiques, which are unattributed to encourage candor. The most promising scents are picked for judging in an effort to find and showcase excellence. WWD buys the products at retail, like any other consumer. The esteemed judges are: Michael Edwards, author of “Fragrances of the World” and “Perfume Legends”; Paul Austin, chief executive officer of sensory storytelling agency Austin Advisory Group; Jean-Claude Delville, senior perfumer at Drom; Karen Dubin, founder and ceo of Sniffapalooza; Victoria Frolova, fragrance industry analyst and Bois de Jasmin editor; Christophe Laudamiel, master perfumer at DreamAir; Nathalie Pichard, owner of training and evaluation agency Topnotes; Chantal Roos, cocreator of Roos & Roos Co.; Luca Turin, biophysicist and perfume critic for arabia.style.com, and Kevin Verspoor, founder of PerfumeKev LLC.