Live in Love is the designer's first new scent in a decade and his first major move since regaining control of his beauty trademark. 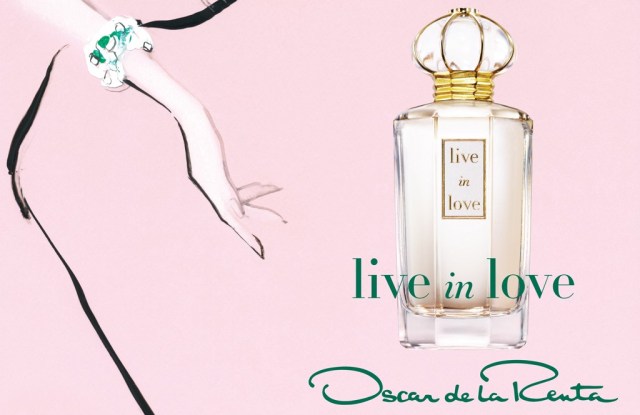 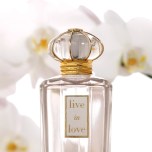 Serendipity is still at home on Seventh Avenue.

When Oscar de la Renta was searching for a name for his new women’s fragrance, it popped up in front of him one day in his sample room. There it was — Live in Love — tattooed on the arm of Raffaele Ilardo, director of the company’s ateliers. Suddenly, de la Renta had the name and the concept for one of the most critical fragrance moves of his career. Live in Love, which is set for an Oct. 15 launch in the U.S. and Canada, will be the first new scent to come out of the design house in a decade and the first completely new project to emerge since de la Renta wrested ownership of his beauty trademark from L’Oréal in a court battle last year.

Led by Alex Bolen, chief executive officer of the fashion house, de la Renta has been edging back into the fragrance game. The first move came prior to Mother’s Day with the introduction of Esprit d’Oscar Eau de Parfum — an eau de parfum version of the classic Oscar fragrance that had made a huge splash in 1977 as one of the first big American designer scents.

Having reentered the market, it is now time to up the ante with a completely new scent under the Oscar umbrella. This new launch is expected to provide a key step to implement Bolen’s plan for putting the Oscar beauty business in synch with fashion and accessories. “We see a lot of opportunity right now with this fragrance,” Bolen said. “We’ve been pleased with the response to Esprit d’Oscar. It’s a fairly recent introduction but we’ve launched it globally and the sell-throughs on a small scale are very good right now, and there’s a lot of excitement around the world in international markets, as well as here in the U.S., about this new launch.” He declined to discuss numbers, but industry sources estimate that Esprit d’Oscar is doing about $7 million in retail sales, which is fairly good for a brand extension. Live in Love, however, is thought to have a first-year retail target of $15 million on a worldwide basis, with plans to grow the volume in subsequent years.

Bolen noted that the Oscar fashion business has gone through a globalization in the last six or seven years, being transformed from 5 percent of the business done outside the U.S. to 35 percent conducted overseas. “And that’s in the context of a very much-expanded U.S. business,” he noted. “We want to take advantage of the increased visibility of our brand internationally. This is very much a global launch for us. We are focused very importantly on markets in Europe, in the U.K., both domestically and at travel retail.”

The duty free market has seized Bolen’s imagination, and not just for fragrance. Once again, he wants to synchronize all parts of the business. “It is a tremendous opportunity…not just for fragrance and beauty but for our company, for our accessories business, jewelry, shoes, bags. Travel retail is a big opportunity. We are working on a travel concept for Oscar de la Renta, not focused on fragrance and beauty but really about our brand and how we approach the travel customer, whether it’s in a duty free context or in a resort context or both. There are a lot of people who are our customers when they’re at home that we’d like them to be our customers when they travel.”

So much so that de la Renta will host a cocktail party on the beach in Cannes, France, Sept. 19 during the Tax Free World Association convention. The U.S. launch in October will be done in conjunction with Lord & Taylor and Belk’s, while The Bay will introduce the fragrance in Canada.

The European markets — the U.K., Germany, France and Spain — will get the fragrance in the February time frame, Bolen said.

During a recent interview, de la Renta talked about what a slippery task it is to come up with an unusual name, a relevant positioning and a fresh presentation. In his lightbulb moment, when he realized the name was staring at him from the arm of his head tailor, the designer was stunned.

“I said, ‘My goodness, what a great name. I’m sure that has been registered by 100,000 people,’” De la Renta recalled thinking at the time. The designer paused, then asserted, “This is about how you embrace life — you live in love. It’s not a person, it’s loving life, it’s loving the life you live, what you give, what you have received.”

He then explained his approach to fragrance. “What you have to do is to try to do something that you can somewhere, somehow make yourself…sort of different from what everybody else is doing,” he said. “At the very end, what counts is not really the bottle or advertisement and how it’s presented. Our principle thing was to create a new fragrance that a woman will fall in love with.”

De la Renta added that a second goal was to create a compelling visual presentation “in a manner that will get attention.”

Live in Love is a green floral that was created in conjunction with fragrance expert Ann Gottlieb. She worked with two perfumers from International Flavors & Fragrances — Jean Marc Chaillan and Carlos Benaim.

Michele de Bourbon, senior vice president of marketing and sales for the fragrance division, acknowledged that the market is flooded with florals, but what makes this scent different is its greenness. One of the top notes, ginger orchid, adds brightness and a hit of freshness, since it’s coupled with bergamot. Those two notes are meant to merge with the lushness of hyacinth, green muguet and galbanum. Florals are at the heart— jasmine Sambac, orange flower and rose. The base is formed with white woods, musk, amber, sandalwood and cedarwood.

The bottle was designed by de la Renta with the eight faceted sides meant to represent the different aspects of a woman’s life.

But perhaps the most pronounced departure for the fashion house — and the industry — is in the advertising. De la Renta described most advertising in the fragrance market as a blur in its sameness. He confessed not being able to remember which model pitched which fragrance. “I am not exaggerating,” he said. “I remember the name of the girl, but I don’t remember whose brand was she advertising.”

So de la Renta decided to go back to an era of much more style and glamour — the Fifties, Sixties and Seventies — when advertising came out of an artist’s pen and brush. The Live in Love ad is a high fashion illustration done by British artist David Downton. It is scheduled to run in the November editions of Vogue, Allure and Cosmopolitan magazines. The company did not furnish figures. But industry sources estimate the advertising outlay at more than $3 million. The advertising effort will be coupled with a campaign on social media, utilizing all of the design house’s platforms on Facebook, Twitter and Tumblr, where Oscar has a blog.

Bolen concluded, “Again, we have to figure out a way to differentiate ourselves, a way to stand out. We hope this is it; I think this is it.”