Asked if he and John Galliano will work together again, the designer had only positive things to say about his previous experience. 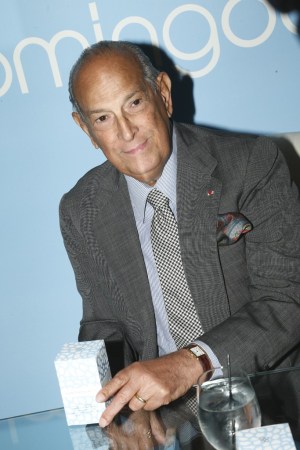 “Right now, I don’t know,” de la Renta told WWD Thursday at a personal appearance at Bloomingdale’s 59th Street flagship to promote his newest fragrance. “I would love to, but a lot of things have to happen. But we will see. He’s a great guy and we have a great, great time together.”

De la Renta had only positive things to say about working with Galliano. “He came to the collection when probably 75 percent of [it] was already finished, but you know it’s so good when you have an eye that silently challenges you,” he said. “It’s sort of like a match to see who is going to outdo the other, which is very important. I’m not a loner in the sense that I like to be surrounded by people.”

He was certainly that at Bloomingdale’s, where hundreds of customers turned out to see him. The appearance generated what industry sources estimate to be upwards of $5,000 worth of business that day. According to insiders, the scent’s foray into Bloomingdale’s could add $500,000 in retail sales by the year’s end. Surrounded by starry-eyed shoppers and store employees alike, de la Renta, who signed bottles, gave photos ops and met with consumers for about 45 minutes on the fragrance floor, was noticeably in his element. The designer took his time meeting with virtually everyone in attendance. “You know, when I first came to New York the [best] place to be was at Bloomingdale’s,” he said. “It’s a full circle. I have come back. I feel that I am reborn. I never look back. I always look forward, but I have good memories.”

At the event, customers could purchase one of 50 limited-edition gift boxes, each $150, which contained a 1.7-oz. bottle, a scented candle, a deluxe mini version of the wedding day-inspired scent along with a trial-size vial and charm necklace. “I think Oscar represents great style, great consistency through the years, great sense of fashion and a great sense of integrity,” said Michael Gould, chairman and chief executive officer of Bloomingdale’s. “And I think that combination is unbeatable.”

The launch, according to de la Renta, is a celebration of the expanding world — and distribution — of all things Oscar. “[The world of Oscar] is growing,” said the designer, who introduced a home line in January and will be launching his ready-to-wear collection at Bloomingdale’s in the next few months. De la Renta, who is also about to reveal his new bridal and resort collections, said while he loves designing, he isn’t so fond of category monikers. “I hate [the name] ‘resort’ — the name of the collection has to change. There are two collections, pre-fall and resort, which have totally meaningless names. We move on, so names have to move on too. Today people buy clothes because they want to buy now, wear now. You don’t buy clothes specific for a resort. You buy clothes because you fell in love [with them], you like it and you bought it.”