By Susan Stone and Melissa Drier on July 1, 2011
View Slideshow 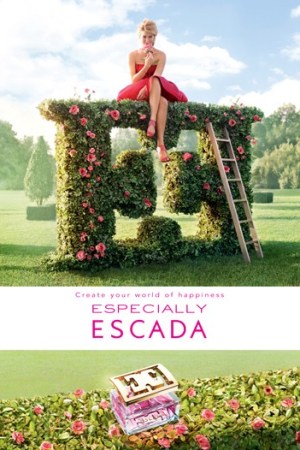 Berlin — The bloom is on the rose for Procter & Gamble Prestige and Escada. The German fashion house’s newest scent, Especially Escada, marks the first release from what is described as a strong partnership between the two entities.

P&G Prestige is positioning the signature scent as the new cornerstone of the Escada range, a rebirth in line with the regeneration of the Escada brand, which was both rescued and rejuvenated through its 2009 post-insolvency purchase by Megha Mittal, daughter-in-law of Indian steel billionaire Lakshmi Mittal.

First launched in 1976, the fashion brand, known for its jubilant embrace of color, appears to be both back in the pink, and firmly in place on the red carpet. Escada gowns have lately appeared on Hollywood starlets like Rosario Dawson and Lea Michele of “Glee” as well as Princess Victoria of Sweden. On the catwalk and at retail, the brand has aimed to stick by its heritage of quality and upbeat sensuality, yet enhance it with an approachability, and even affordability via price positioning and broader entry-level offerings, all moves that help attract younger buyers.

To bottle the essence of the new Escada, the two firms worked together closely to identify what the fashion house stands for, coming up with “cool glamour and modern elegance,” said Luigi Feola, vice president of P&G Prestige. The company hopes Especially Escada will resonate with luxury shoppers looking for a post-economic crisis return to sophisticated fun.

Especially Escada has notes of pear and ylang-ylang and a heart of rose, rounded out by musk base notes. The pink-tinted eau de toilette comes in a heavy rectangular glass bottle topped with a shiny gold interlocking double-E cap in 30-, 50- and 75-ml. sizes, priced at $46, $62 and $84, respectively. Especially Escada body lotion and shower gel in 150-ml. versions are priced at $35 and $30, respectively. Body care items and product boxes are in vivid pink with gold accents.

At first blush, it seems that the rose-centered scent moves away from the flirty, seductive gourmand confections that constitute Escada’s latest entries to the Me range, Desire Me and Absolutely Me, which are fronted by actress Olivia Wilde.

“It’s a shift in scent equity towards something perhaps more elegant,” said Will Andrews of P&G’s Fragrance Creation Team. “If you think about the equity of Escada, it is elegant, it’s luxurious, it’s glamorous, but it’s a happy brand as well.” While rose may be a classic flower, the pear is intended to add sparkle, invoking a rose garden with a ray of sunshine hitting it, explained Andrews.

In a print campaign shot by Mark Seliger, Refaeli channels an almost wholesome high femininity. Clad in modest but vivid gowns — Escada of course — she perches atop and embraces a blooming topiary version of the double-E Escada logo; the tag line is “create your world of happiness.” In addition to the ads, which will run in magazines in Europe, the Asia-Pacific region, and the U.S., the company also plans what it calls an “unprecedented” interactive digital campaign, along with special in-store supporting materials.

Feola said launch activities are just the beginning for the scent, intended to be the hallmark of the house. “It is our intention to sustain this new fragrance over time. We are not going to launch and leave, and move onto the next initially. We are about creating classics,” said Feola. “And this is going to be definitely the case for Especially Escada.” The kind of close coordination with Escada management forged through this project will also continue for future projects, he said.

The Escada name has been steadily present in the market, with the brand’s limited edition summer fashion fragrances making regular yearly debuts, and bringing in solid sales. “Consumers love it,” noted Feola, pointing out that 2010’s edition, Taj Sunset, turned in double-digit growth over the previous year’s offering. He anticipates mutual promotional benefits between the new release and the seasonal flankers.

Especially Escada will hit counters globally in August and entry into the U.S. market will be in September. Industry sources estimate Especially Escada could generate $100 million in global sales in its first year.

Escada’s offerings in the beauty realm may blossom further. In an interview with WWD last year, Megha Mittal said she sees future opportunities in extending Escada’s product line. There’s no specific plan now, she said, but brand extension could include cosmetics to flank the Escada perfume business.