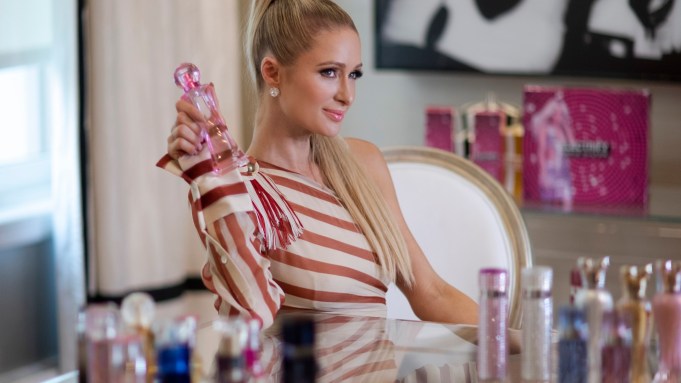 Called Electrify, the scent is meant to capture the rush Hilton feels when she is DJing.

“Electrify was inspired by nightlife, me DJing, and just being on stage and performing in front of people and that amazing feeling I get where I feel like I’m electrified,” Hilton said during a wide-ranging business interview at her Manhattan apartment.

She has also branched out into other categories, launching a skin-care range that’s set for a store rollout in Asia, making tech investments, and opening Paris Hilton retail stores in the Middle East and Asia. In all, Hilton now has 19 product lines.

At her New York loft — which is decorated mostly with large-scale photos of herself, plus Terry Richardson’s The Paparazzi Machine and homewares from John Derian — Hilton is in between engagements. She’s supposed to post her first YouTube episode at 2 p.m. — “oh, s–t, let me just post this really quick” — and is eating a By Chloe burger and Juuling as she whirls around the full-floor apartment, reapplying lip gloss and fixing her own bronzer between shoots. Her dog, Diamond Baby, a chihuahua with a hanging tongue and sideways gate, is there, too, soaking up all the attention she can get.

“She’s a queen, she does whatever she wants,” said Hilton, who asked if it was OK for Diamond Baby to be lifted up onto the white leather sofa. She said that the spirit of Tinkerbell — her chihuahua that died in 2015 — is alive and well inside Diamond.

In front of the WWD photographer, Hilton is a pro — joking in a one-shouldered Monse dress about how she practices posing in front of the Paparazzi Machine piece, which flashes just like real paparazzi, before she goes out at night — but on video, she is more reticent. “I get shy,” she said.

It’s hardly what one would expect from one of the founding stars of reality television — Hilton spent five years filming “The Simple Life” — but says that version of herself was a character.

“I’m an Aquarius, so I’m a naturally creative person, and I’m also a workaholic,” Hilton said. On top of her product empires, she’s got a real estate business and is said to be the highest-paid female DJ.

“The first product I ever released was my perfume. It was such a huge success that I started expanding my empire. I now have 19 product lines, everything from skin care, makeup, perfumes, handbags, sunglasses, clothes, jewelry, lingerie, homewares — basically, every type of product you could think of,” Hilton said.

“I have 25 fragrances. When I was a little girl, I always thought I would have one perfume. I had no idea I would have 25 one day,” she said.

Her latest fragrance, which launches Sept. 30, is housed in a translucent neon pink bottle with a disco ball cap, and contains notes of Scarlett Apple, Turkish Rose and Sandalwood. It’ll be sold at Perfumania, which owns Parlux, the business that holds Hilton’s fragrance license, and at other retailers globally. Industry sources expect that it will bring between $4 million and $5 million in the first 12 months, and that Hilton’s collective fragrance business is likely to do $100 million in fragrance sales for 2019.

Many of Hilton’s customers are also her fans, and her brand is said to do especially well in Latin America, the Middle East, Australia and in North America. Fans share pictures of her products on social media, Hilton said, and she goes above and beyond to make sure they feel appreciated, especially at personal appearances.

“I take time with each and every single person who comes, even if they say it’s going to be a two-hour appearance. I’ve been at places where I’ve stayed 10 hours until literally the mall has to close because I want to make sure every person who came gets to meet me and gets to talk to me,” Hilton said. She calls her fans “the little Hiltons” and said they’re like her little brothers and sisters.

In Netflix’s “The American Meme,” Hilton says she’s so close with her fans that she lets them stay in her home. Asked if that was safe, Hilton said that “all little Hiltons are really good.”

Her fan base spans the globe, as does her product empire. Hilton has 45 retail locations in the Middle East and Asia, which she said are essentially replicas of her home, down to the chandeliers and the wallpaper. They sell her products, including fragrance, jewelry, handbags and shoes, and have selfie stations for shoppers to share their experiences.

Next up is taking things “to the next level,” Hilton said. That means more launches — a skin-care device, a third book, a YouTube film and 100 retail stores across Asia for her skin-care line Paris Hilton ProD.N.A. — are all in the works.

For ProD.N.A., Hilton recently launched a $46 Gold Peel-Off Mask that contains natural alpha hydroxy acids from sugar cane, Vitamin E and Willow Bark. Hilton claims the line, which is centered around micro algae, is what has kept her skin looking so young.

Outside of the beauty realm, Hilton is also breaking into tech.

As a teenager, she was very into Street Fighter, she said. “I would be in Malibu and go to Pizza Hut and just be on the Street Fighter game during the summertime, so I was obsessed with that,” Hilton said. “Then, about seven years ago, I went over to Shanghai and had a bunch of meetings with all the biggest virtual reality companies and started developing my Paris Hilton Virtual World, and I just became even more obsessed with it because it’s the future.

“It’s going to be the new social media,” Hilton continued, describing herself as a “huge undercover nerd.”

“This is the future, where people are going to actually be in their living room, but feel like they’re in Ibiza in a club and meet someone from around the world, and also buy products and integrating…the shopping aspect of it as well,” Hilton said. “You could either buy it virtually, or you could actually buy. So it’s another platform for people to shop.”

Paris Hilton is Making Her First Outside Beauty Investment: The Glam App