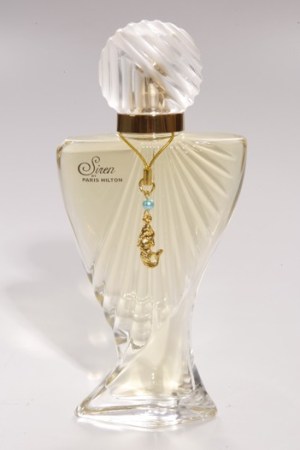 Paris Hilton is playing seductress with her newest scent, called Siren, and licensee Parlux Fragrances Inc. is hoping the hotel heiress’ act is one that consumers haven’t tired of.

This story first appeared in the June 22, 2009 issue of WWD. Subscribe Today.

Due out next month, Siren marks the sixth women’s scent in the Paris Hilton fragrance franchise, whose annual worldwide retail sales are estimated to be about $200 million. Executives declined to discuss sales figures or advertising spends for Siren, but industry sources indicate the company is aiming for a wholesale volume of roughly $20 million for the first year.

Department store distribution for the mermaid-themed scent will approach about 2,000 doors, including Macy’s, Belk, Bon-Ton, Boscov’s and Stage Stores.

Neil Katz, chairman and chief executive officer of the Ft. Lauderdale, Fla.-based Parlux, said the Paris Hilton business continues to “remain strong,” despite one of the bleakest fragrance markets in decades. “We don’t know how serious the economic downturn is,” explained Katz. “The recession, as it affects retail sales overall, is impairing our ability to predict whether or not the businesses will be maintained.”

But he remained unfazed about the Paris Hilton business, crediting the tabloid princess’ business savvy. “She’s head and shoulders above so many other celebrities because of her connection with consumers, but also her connection with the paparazzi,” said Katz. “They appreciate that she takes the time to answer their questions, and pose for them. Paris understands the role they play in her business.”

Katz said he anticipates Hilton will make four to five in-store appearances this year on behalf of her fragrance franchise. The print campaign, shot by Mark Liddell in Los Angeles, features Paris as a mermaid with a sequin golden tail against a backdrop of ancient ruins. Advertising is scheduled to bow in all major books in July.

Siren, created by Honorine Blanc with Firmenich, has top notes of juicy mandarin, apricot nectar, and frangipani, with a heart of honeysuckle, coconut orchid and water lily. The drydown consists of vanilla beans, sandalwood and creamy musk. The sculpted glass bottle is designed to represent the tail of a mermaid with pleats that twist around to mimic a splash.