Three years after the launch of its 13th pillar fragrance, the brand is celebrating its updated positioning with a new “flagship” scent. 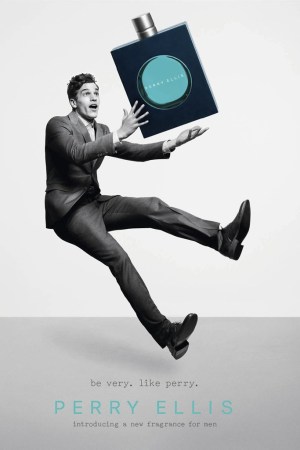 If Perry Ellis and Falic Fashion Group have it their way, this summer will be “Very Perry.”

Three years after the launch of its 13th pillar fragrance, Perry Ellis is celebrating its updated positioning with a new “flagship” scent, Perry Ellis.

“He [Ellis] always wanted to make clothing that was stylish and witty and never wanted fashion to take itself too seriously,” said Perry Ellis’ vice president of marketing, Matt Cronin. “There’s always a sense of levity to his work.”

With the goal of preserving its heritage while injecting a touch of spontaneity, the Perry Ellis brand was revamped in fall 2012. With a new slogan, “Very Perry,” and graphic sign-off, a dot found on everything from the inside lining of Perry Ellis shirts to brand advertising and imagery, the brand is looking to add its latest fragrance to the mix. To wit, the scent’s square metal bottle aims to integrate the graphic, with a die-cut area revealing the teal-colored juice.

“This is the first fragrance that we have been able to fully launch from bottle design to the [juice] itself to the imaging [that is] reflective of the new positioning,” noted Cronin. “We’re targeting men between the ages of 25 to 45, which is also the target for the brand itself.”

The man himself, Perry Ellis, inspired the concept for the namesake scent, which was created by Givaudan’s Claude Dir. The fragrance opens with top notes of bitter orange, cardamom, coriander and clary sage; a heart of fir, mint, cedarwood and lavender, and base notes of sandalwood, patchouli and white moss wrapped in tonka bean, amber and musk. “Perry Ellis for men represents the new generation of free-spirited, modern men who have confidence in whatever they wear,” said Jerome Falic, chief executive officer of Duty Free Americas, which owns Falic Fashion Group. “We developed the fragrance with a focus to offer the perfect complement to the Perry Ellis man’s fashion ensemble.”

The Perry Ellis eau de toilette will be carried at 436 stores nationally, including Macy’s, Dillard’s and Boscov’s, beginning Aug. 1.

While executives declined to comment on projected sales, industry sources estimate that Perry Ellis could do $4 million in sales in its first year on counter.