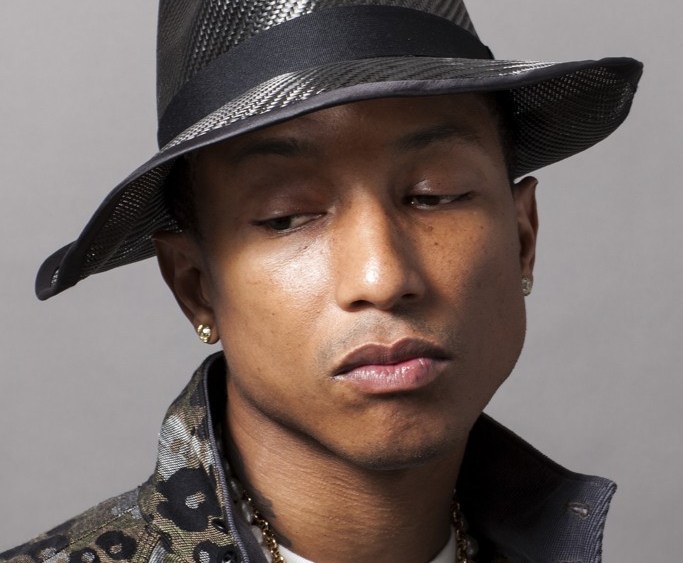 LONDON — Pharrell Williams, whose neck is draped with “remade” Chanel pearls and jewels, and who admits to wearing “some women’s things, too,” was never going to take the traditional route for his first fragrance, a unisex scent called Girl.

“There should be no lines — I learned that from Comme des Garçons,” said Williams during an interview in a sparse and sunny conference room at Dover Street Market’s offices here. “Hence, Girl — for girls and boys. We just found another way to say unisex,” added Williams, whose scent, a collaboration with Comme des Garçons Parfum SA, will launch in London on Sept. 1.

The 41-year-old Williams’ thinking wasn’t always avant-garde — at least in the field of fragrance. The multitalented musician and serial collaborator, who released his sophomore album earlier this year, also called “Girl,” said he started his fragrance journey with Polo by Ralph Lauren, the mainstay of the young and aspirational American male.

“The basic Polo fragrance when I was young was kinda cool to me,” he said. “And then I had this weird thing with [Christian Dior’s] Fahrenheit, because it was just so different, and it stood out — juxtaposed to the rest of the fragrances. And then I didn’t wear fragrances for about, maybe 15 years.”

The experience that finally turned him was bumping into Sarah Andelman, the founder and creative director of Colette in Paris.

“It was maybe four or five years ago at Art Basel — she gave me a hug, and I was like ‘What is that?’ and she told me, Wonderwood. And from that moment on I was just in love with what Comme [des Garçons] did,” said Williams.

His diverse collaborations may be in all different fields, but the reason for pursuing them is always the same.

“When I do a collaboration with brands, I do them with notable masters, so that I can experience the true purpose of collaboration, which is to learn. So I only work with masters,” he said. “We had the best nose in Paris, I was working with the best brand — Comme des Garçons is your favorite designer’s favorite brand — so there was not much of a struggle, because I was working with the masters of the artistic universe.”

Williams continued: “I work with all the masters because it allows me a crash course into not only who they are as people, but into their art form, and their craft. So that’s pretty cool.”

His restless desire to learn — and to appropriate — extends beyond his official collaborations.

Williams’ main requirement for his own Comme fragrance — other than that it be unisex — was that it smell woody. “I was enamored by [Comme’s] ability to deliver wood to the masses in the way that they have,” he said.

The fragrance features top notes of neroli, lavender and white pepper; middle ones of iris, styrax and violet, and base ones of vetiver, patchouli, cedarwood and sandalwood.

It will launch at Dover Street Market London on Sept. 1, and roll out to the U.S. on Sept. 5. It will be sold at all Dover Street Markets — in Tokyo, London and New York — and at Sephora, via an exclusive partnership, in the U.S., Canada and France.

The bottle, logo and packaging have been designed by House + Holme, featuring bold, cartoonish artwork by the artist Kaws — a friend of Williams’. The 100-ml. bottle is priced at $135, while a 10-ml. travel size version costs $30.

Adrian Joffe, chief executive officer of Comme des Garçons Parfum, said he hopes the new fragrance will generate $10 million in retail sales in the first year. “That’s a lot more than we normally do, but this, we think, should be quite successful.”

Joffe said it was quick getting the fragrance off the ground. “We did the deal, and then we got the perfume in 14 months. I think it was about six tries, so we met about five, six times. He really knew exactly what he wanted, it was quite easy,” said Joffe, adding that Williams had zero doubts about his approach to fragrance.

“I said to him: ‘Are you sure you don’t want to do a proper celebrity fragrance with a huge company, with massive advertising?’ I told him the way we do it, how we do mostly prestige fragrances; it’s not going to be cheap; we use good quality ingredients, and we don’t have so-called, very commercial fragrances. And he said he wanted to do a high-quality, high-image, prestige perfume. He said we were the perfect partners for him.”

The Grammy Award-winning Williams is certainly no stranger to a collaboration and clearly thrives on the work he does off the music grid: He has his own clothing lines under the Billionaire Boys Club and Ice Cream labels, and has undertaken a number of fashion- and art-world partnerships in recent years.

He’s done eyewear and down jackets for Moncler; fine jewelry and sunglasses for Louis Vuitton, and has unveiled an environmentally friendly denim collaboration between G-Star Raw and Bionic Yarn, where Williams is creative director. Earlier this year, he unveiled collaborations with Adidas and the apparel company Peace Love World.

Next week, an exhibition curated by Williams called “Girl” will open at Emmanuel Perrotin’s new space in Paris, the Salle de Bal. It will showcase 40 works by mostly female artists including Marina Abramovic, Sophie Calle, Cindy Sherman and Tracey Emin. The showcase opens May 27 and runs through June 25.

Asked why he embarked on a fragrance partnership in particular, Williams offered a philosophical response: “For each of our senses there’s an art form: For ears there’s music, for your eyes there’s art, for your nose there’s fragrance, for your taste there is the culinary art, for feeling I say there is love.”

He chose Comme des Garçons after spending some time getting to know the designer Rei Kawakubo and her husband Joffe, sitting front row at the shows and wearing the clothes. (He met Kawakubo and Joffe through Ronnie Cooke Newhouse, creative director of House + Holme).

Williams described the Comme fashion shows as “these vortexes of no rules, very ‘Twilight Zone,’ but in the coolest way ever. I was blown away by it. Just being invited into that world.”

At one point, he said Kawakubo asked him what he was interested in doing next. “And I was like, ‘Wow! Rei Kawakubo is saying to me: ‘What are you going to do?’ And I was sitting in their fragrance room, and she said, ‘You want to do a fragrance?’ and I was like ‘Sure!’ And the next thing I knew, we were off to the races!”

Today, Williams is a billboard for his own creativity and that of other artists: His jewelry — including the long strand of knotted pearls dangling midchest, is “all remade Chanel jewelry [costume jewelry recast in precious materials], remade so it’s real, not faux. I love Chanel,” he said, pointing to a brightly colored Chanel belt that he’s customized to suit himself.

His “DIY” Stan Smith sneakers have little drawings by artist Takashi Murakami, by Nigo — the Japanese music producer and Williams’ collaborator on the Billionaire Boys Club and Ice Cream labels — and by his own hand. His black carbon fiber hat — minus the resins — is the fruit of a collaboration with Adidas, while his jeans are from the Boys Club. His richly patterned jacket is by the Japanese label Sacai.

Fashion, however, is only one chapter in the big book of Pharrell Williams. The “Happy” and “Get Lucky” singer said every single thing he does flows from his music. “Music is the skeleton key that’s opened every door for every opportunity that I’ve had in the last twentysomething-odd years. Without the music, I’m just a guy with a couple of weird ideas,” he said.

He declined to talk about upcoming collaborations, saying he was happy “with all of the platforms that I’ve been blessed to be able to work across thus far.” Last fall in Paris, during the launch of his sunglasses project with Moncler, Williams hinted about a possible collaboration with Google Glass.

Asked if there was any progress on that, he demurred: “I’m not one to discuss half-baked cakes.”