Philippe Starck and brand of fragrance language are planning to stick around — his next trio focuses on emotions, he said. 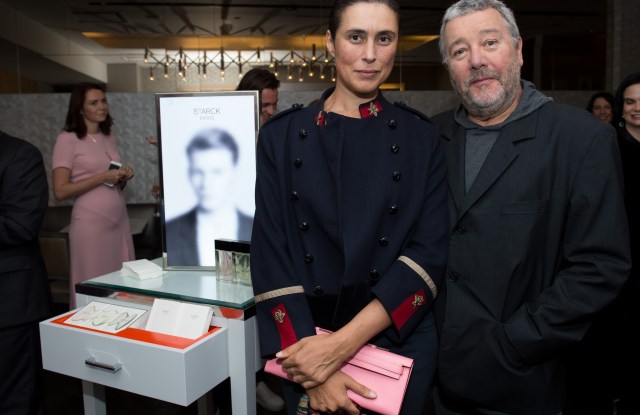 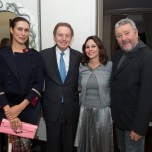 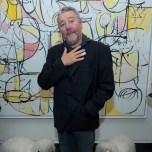 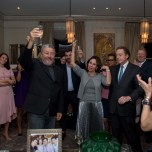 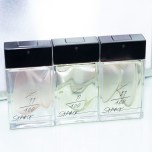 Designer Philippe Starck will be channeling emotion in his next trio of fragrances.

“I cannot speak a lot about it because it’s done,” Starck said at a cocktail party to celebrate his first three scents, Peau de Soie, Peau D’Ailleurs and Peau de Pierre, at Bergdorf Goodman in New York. The party later migrated to the nearby residence of James and Lisa Cohen at a party thrown by Lisa’s Galerie Magazine, which hosted mainly denizens of the art world.

“It’s about pure emotion. We have the people, the actors,” Starck said, referring to the people his first perfumes are meant for, “now we shall speak about what they feel.”

“It was very interesting because it’s even more abstract,” Starck continued. He said after the next release, the skin-of groupings (peau de means “skin of” in his native French) will cease.

So far with his first collection, which is in almost 400 doors globally, the perfumes have attracted the people they are meant for, he said. The brand is adding select distribution as it grows, but with the current number of outposts, should be able to bring in about $17 million in sales in the next year, according to estimates by industry sources. In Canada, the line is talking to Holt Renfrew and Hudson’s Bay, a source said.

“We’re speaking to other retailers but have not finalized anything,” said Alex Shalbaf, president of The Fragrance Group. “We want to be in national retail distribution of 300 points of sale.”

The brand launched exclusively with Neiman Marcus in the U.S. For Bergdorf’s, Starck hand-labeled and signed about 98 bottles of each scent — it was supposed to be 100, but some bottles were damaged, a source said.

“For me, perfume just is a way to communicate,” Starck said. “Some story, some experience, some theory, something like that. And it’s not working with scents, it’s working with semantics, and the three stories are very precise. It’s wonderful — it’s astonishing — to see how it’s precise, how the people I made it for react exactly — they read it exactly. It’s astonishing, astonishing. The three perfumes are — I don’t want to be pretentious, it’s my English — but for intelligent people. Which is very important because it’s not a fancy bottle, there is nothing fancy in that, and in the woman, the scent Peau de Soie, goes to the intelligent woman who wants to be very feminine [but with a bit of masculinity].”

Starck describes the customers for Peau de Pierre, which is aimed at men, as mature. “He’s not interested by the perfume, he’s like ‘What is this?’ He doesn’t understand. The man is modern with a little culture, effeminate … but the surprise, is the type of women who love the man one – who love Peau de Pierre,” Starck said. “That is very interesting because finally they love this femininity with a sort of masculinity.”

Then there’s the third fragrance, Peau D’Ailleurs — which Starck says is bringing in the customers who are less into labels. “Peau D’Ailleurs, which is made for the people who are not really interested to know if I am a man, a woman or a dog or something else, jump immediately on that.”

The why, he says, is because the perfume has precise results. “That confirms that perfume is a language. It’s a language, and the story I said about the man, the woman and the other are what people want, it’s what interests people now. Because the bimbo interests nobody now, the mature interests nobody now, but my description of the woman, my description of the right man…are looking for this woman, people are looking for this man,” Starck said.

Outside of fragrance, Starck continues to work on a myriad of projects, including a new hotel in Matarazzo, Brazil and the SLS Brickell in Miami.

“He’s constantly creating…he has so many ideas per second, so it’s the only way he can live, actually he cannot do anything else, so at least it’s interesting,” said Jasmine Starck, Philippe’s wife — they have five children, one together. “He creates and draws in Portugal, that’s his quiet place. We have a studio in Paris, but he never can create in a studio because you have meetings, you have the team — you can only create in a remote place, so we have a place in the [Portuguese] dunes.”

“We have our house and he has turned the dining room into his office, meaning his drawing room,” Jasmine Starck said. “It’s a very ancient, old wood dining room with a view of the sea, so he’s locked there every day we are there, at least 12 hours in front of the sea — that’s his element.”