LOS ANGELES — Pinrose is inviting Nordstrom shoppers to break free from the confines of signature scents and revel in their multifaceted fragrance personalities.

The year-old online perfume start-up went brick-and-mortar a month ago by rolling out iPad-enabled displays across the department store chain to facilitate fragrance-buying with a 10-question quiz that establishes consumers’ scent personas by asking about shape, color and sound preferences. So far, more than 25,000 people have taken the quiz at Nordstrom to determine which of Pinrose’s five scent personas (Charmer, Magician, Prophet, Goddess or Ruler) best describes them and discover the three scents the brand has developed to suit that persona.

“We are the antisignature scent. The idea of a signature scent is very outdated and dying. It puts way too much pressure on a consumer to find one signature scent,” said Erika Shumate, who vacillates between the Charmer and Magician personas and founded Pinrose with Stanford University Graduate School of Business classmate Christine Luby (strictly a Charmer). “We see women playing with fragrance in a way that’s more of a mood-based accessory and not something she’s invested in like a car that has to smell the same way forever and make her feel guilty if she wants something new.”

While Luby and Shumate initially experimented with Pinrose’s quiz online — where 200,000 people have completed the exercise — to guide shoppers to scents they couldn’t smell through their computers and smartphones, they originally intended to branch into physical stores. They believed their algorithmic approach, informed by the work of neurologist and smell expert Alan Hirsch, could simplify fragrance retailing for newbie scent shoppers as well as customers who’d abandoned scents because they were confused by vast selections or didn’t relate to the celebrity-heavy marketing.

“The big brands come out with release after release after release every year. Their top notes have gotten very, very similar to one another, and there are just too many choices,” said Luby. “I love scent, but I turned away from it because it was too overwhelming, too hard and too clandestine.”

Ironically, the technology Luby and Shumate created to make fragrance shopping unintimidating could be intimidating to some shoppers not accustomed to digital devices in traditionally analog environments. Marti Holtrop, vice president and divisional merchandise manager of fragrance at Nordstrom, acknowledged not everyone wants to take Pinrose’s quiz, but interactivity intrigues most customers, especially the younger set. “We view technology as an enabler of the service experience we aspire to offer. It gives us more ways to take care of the customer on their terms and to connect with them,” she said.

Although Shumate exclaimed the age range of Pinrose’s customer base is “insane” with 11-year-olds as well as 92-year-olds picking up its fragrances, Millennial shoppers make up the heart of the brand’s business, and the average age of its customers is 27. “The reason why is that we ourselves are Millennials. We are a more fickle customer, like things that are highly personal and are not afraid of technology,” she said.

Pinrose offers 10 fragrances for $55 each at Nordstrom and $24 Petal Packs with an assortment of towelettes — or petals — from the three fragrances associated with a persona. The fragrances are housed in colorful packaging and have names (Secret Genius, Pillowtalk Poet and Tambourine Dreamer among them) designed to accentuate their personal appeal, But Luby and Shumate emphasized the fragrance juices occupy much of their time and money. They employ known perfumers (David Apel, who is behind perfumes from Tom Ford, Jo Malone and Ralph Lauren, crafted Pinrose’s namesake fragrance, for example), encourage them to be inventive in their concoctions and mention them along with their perfumes on Pinrose’s Web site. “Our goal is to show off their artwork,” said Shumate.

Luby and Shumate argue the success of Pinrose won’t only show on its own balance sheet, but will be demonstrated by bringing new customers into the fragrance category, even if they don’t ultimately decide to purchase Pinrose perfumes. Eventually, the brand could even play a role in sales increases in other categories. “As we collect data, we can offer other products that are suited to her [the customer’s] tastes. If she’s more fashion-forward, she might want a bold smoky-eye kit. Over time, that’s our big vision,” said Shumate. “We want to use technology not in an overwhelming way, but to make the consumer feel empowered and educated.” 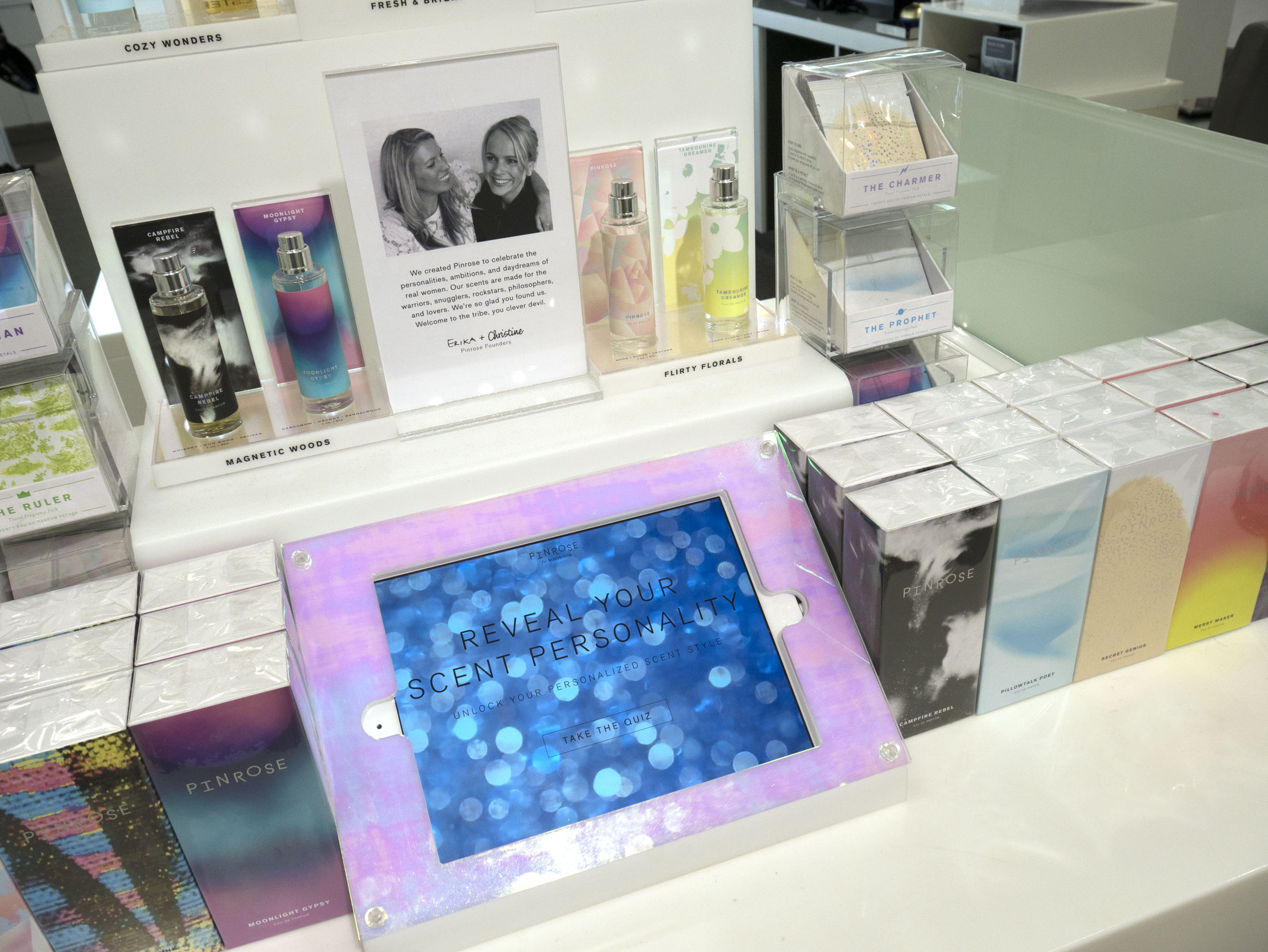