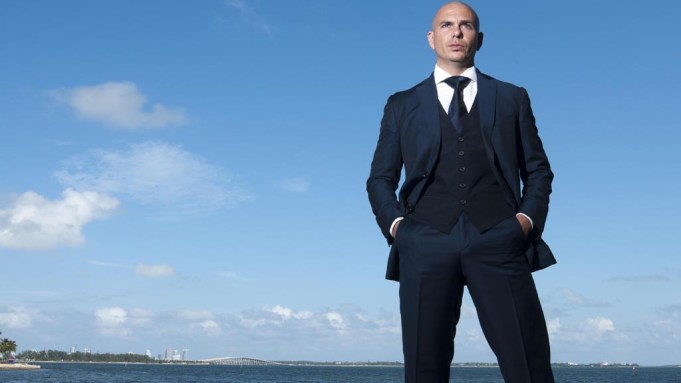 Despite a snarling moniker and a tenacious resolve, Pitbull — otherwise known as Armando Christian Pérez — has a surprisingly sensitive side.

He’s also thoughtful and determined, and the 32-year-old isn’t afraid to think outside of the box — indeed, he relishes it.

The Miami-born Pérez’s upbringing in that city’s tough Little Havana section equipped him with an awareness that comes in handy when launching a fragrance masterbrand. During an exclusive interview, he describes his youth as “being raised by nothing but women, my mother was my father. I was always around these great-smelling products and I would see the way [his mother] would mix them up and wear different outfits. I was always intrigued by fragrance.”

In fact, he was heavily influenced in many things by his mother, Alysha Acosta, who immigrated to the U.S. in the early Sixties as part of Operation Peter Pan, a CIA project that transported to the U.S. from Cuba 14,000 children of parents who opposed Fidel Castro’s revolutionary government. He referred to the Cuban upheaval as the “quote unquote revolution.” He mentioned that his grandmother was “involved in the revolution” and his father came over on the Mariel boat lift.

Growing up in the Eighties during the heyday of “Miami Vice” also tuned Pérez into the world of scent with the sharp-dressed hipsters who “always had a heavy smell to them. Personally I wasn’t a big fan of that — I was more about a softer, sexier smell. I’m in the business of attracting women, not men,” he said with an easygoing laugh.

The result is a line of men’s and women’s fragrances, simply titled Pitbull, and a marketing campaign that demonstrates Pérez’s penchant for pragmatic and patient but nonconformist thinking. Instead of launching the fragrances next Valentine’s Day, they will be officially unveiled during his New Year’s Eve concert at the American Airlines Arena in Miami. But preselling will begin on Dec. 1 with a nontraditional launch partner. Jacavi Worldwide, which handles Pérez’s trademark as his global licensing partner, and Parlux Ltd., his fragrance licensee, decided to give an exclusive to Amazon.com until Feb. 14. It will be the Web site’s first exclusive prestige fragrance as part of the giant selling machine’s fledgling entrance into the premium beauty market, according to Donald J. Loftus, president of Parlux Ltd. and executive vice president of Perfumania Inc. Next year’s rollout will be determined after the nature of the business becomes evident, he said, adding that could take the scents either into department stores or the mass market.

The fragrance introduction is part of a very busy season for Pérez. On Thursday, he will take part in the Latin Grammy Awards presentation, in which he has been nominated for “Best Urban Performance” and “Best Urban Song” for “Echa Pa’lla (Manos Pa’rriba)” at the Mandalay Bay hotel in Las Vegas. On Nov. 25, he will host and perform at the American Music Awards, which will be held in Los Angeles and broadcast by ABC. The same day, Pérez will launch his seventh album, “Global Warming: Meltdown.” Its lead single, “Timber,” was released Oct. 7 and also features Ke$ha. Another single, “Feel This Moment,” features Christina Aguilera. His new album is a follow-up to “Planet Pit,” which generated sales of more than 1.7 million albums and 19 million singles. As if all this is not enough, Pérez hinted that on Dec. 31, “we’ll have a major announcement that has to do with music and the world.”

Pérez has chalked up total music sales in excess of five million albums and 40 million singles worldwide, and he has scored number-one hits in more than 15 countries. The music video for his worldwide hit “Give Me Everything” has drawn over 300 million views on YouTube. Known as “Mr. Worldwide,” Pérez just finished his second world tour, with shows across Asia, and he is contemplating a third round.

The cylindrical shaped bottles were meant to convey a sense of “simplicity, sexy, powerful.” Pérez said he was inspired by the monumental buildings he saw travelling around the world in places like Dubai, Shanghai and Malaysia. And the fragrance marketing effort will indeed be global; Pitbull will benefit from Amazon’s position as the second-largest global retailer behind Wal-Mart. Amazon has 200 million customers globally.

The scents will also be promoted via ad screens on Kindles beginning today and later will participate in Amazon’s Vine Product Reviews Program, which puts Pitbull in the hands of the most highly rated reviewers on Amazon, said Espino. On the entertainer’s social media channels, the masterbrand’s message will be shared through engaging storytelling using branded profile, covers and banners; content including, content tabs and in-video product placement; links and mentions, and custom content such as original video ads. At press time, the entertainer was closing in on 15 million Twitter followers and 40 million Facebook likes. “What I love about social media is that it is a great way to learn about the people who follow you every day and to learn to create a call to action, not only monetize it, but to give them a great experience and get them involved. I want them to feel they were part of everything we did to put this together,” he said.

Asked why he opted to create a men’s and women’s masterbrand in his first fragrance effort, he did not give an expected reply. “When we started talking about it, it was about very sexy smells,” he said. “The woman can wear the men’s cologne and the man can wear the women’s perfume.” This, he said, is a reflection of his habit of mixing fragrances together, regardless of gender. “I love to mix them up and see what kind of people you attract off of them,” he said, naming Versace, Varvatos and Prada as brands he’s mixed on himself. “I am a walking focus group.”

As befits Pérez’s methodical style, limited-edition flankers for these fragrances are already in the works — Pitbull Miami, set for a 2015 launch, and Pitbull Rio, set for a 2016 launch. Pitbull London and Pitbull Berlin are also on the drawing board.

But don’t expect them to be, well, what you’d expect. “I think that a soft, sexy sensual scent isn’t what people are going to expect from me,” Pérez continued. “Due to imaging, people think I’m someone that I’m not. The innovative part of that is when you have a man who comes with a scent which I would say is more womanly, I think that’s innovative, especially when you have a man who will admit it. But that’s due to the fact that I’ve been reared by nobody but women, and those are the kinds of things that attract me.”

Indeed, despite his bigger-than-life persona, Pérez seems to follow a simple yet powerful creed: listen, watch and learn.

He credited Luther Campbell of Luke Records and fellow entertainer L’il Jon with teaching him how to put a record together and Jennifer Lopez and Shakira for having become “amazing brands and, in our culture, gods. To be able to learn from them is priceless.”

He seems to be approaching the fragrance business with a sense of humility. “I have been in business since 1999,” Pérez said. “This is our first crack at it. We’re not looking to hit a home run or a grand slam; we’re just looking to learn and then give the best product that we can. And in turn, spread the word to the public.”

The fragrance marketing effort will indeed be global. No one discussed numbers, but industry sources estimate that the fragrances could generate as much as $20 million at wholesale during the first year.

Pérez has also taken a studious approach to his music, steadily climbing up the charts, often with the help of a galaxy of stars he has collaborated with on his records. “Everybody I’ve worked with I learned something from,” he said, referring to the likes of Usher, Enrique Iglesias, Lopez, Shakira and Janet Jackson. “I tried to absorb, observe, learn and then apply their positives and negatives. These amazing artists that I’ve gotten to work with have given me the opportunity. I just sit back and learn. We are here to take full advantage of these amazing opportunities that have been given to us.”

In a selfless effort to give back, Pérez is returning the favor in the form of a charter school in Little Havana. Called SLAM — short for Sports Leadership and Management — the school, which offers middle-school and high-school educations tuition-free, opened Aug. 19. Another five schools are on the drawing board. “[With] everything I learned, that is the ultimate giveback I can give. We’re trying to teach [the students] that whatever obstacles that life puts in front of them, that only makes them stronger.”

He’s very clear that his fragrances are just the first step in a Pitbull product empire. “I’m definitely going to get into fashion and accessories and beauty products,” he said. “But it’s all about cutting the right deal to be able to control your own destiny. The last thing I want to do is get caught up in a corporate thing where everybody’s just doing it textbook. I want to innovate. I’d rather do things that are unconventional, untraditional, fun and engaging and see if the numbers fit their market share or their quota. It may take a little longer for me to do it, but for the simple fact that we want the deals that will allow us to control our own destiny.”

Questions about being Cuban-American strike a chord with Pérez: “We’ve taken all that hunger and all that drive and we’ve applied it.” He drew a parallel between the rise of Cuban-American culture and the ascendancy of Miami itself. “We are definitely the diving board into Latin America and they [Cubans] have definitely created a hub here. I think we have taken a lot of the ambition that the parents had coming over here looking for the American dream,” he said. “And not only on the music business side, you have a lot of guys on the educational side. You have a lot of guys making moves on the political side that are making their mark. Within five to 10 years, there’s going to be a lot of historical things done by people who have come from this community.

“I am the epitome of the American dream.”